Lightning still the team to beat in NHL's Eastern Conference 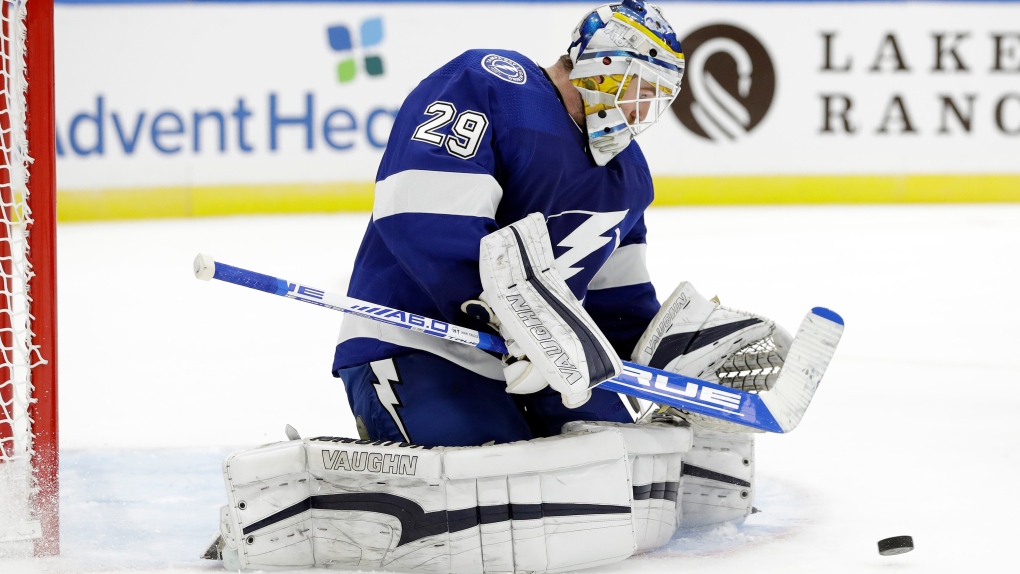 Tampa Bay Lightning goaltender Scott Wedgewood (29) makes a save on a shot by the Carolina Hurricanes during the third period of an NHL preseason hockey game Tuesday, Sept. 17, 2019, in Tampa, Fla. (AP Photo/Chris O'Meara)

Getting swept in the first round wasn't enough to knock the Tampa Bay Lightning off the mountaintop.

After finishing 21 points ahead of everyone else during the 2018-19 regular season, the Lightning are again Stanley Cup favourites and the team to beat in an ever-improving Eastern Conference. With a stacked roster that includes goaltender Andrei Vasilevskiy, defenceman Victor Hedman and forwards Steven Stamkos and Brayden Point, the road to the final goes through Tampa Bay.

"They got a young goaltender who's getting better and better every year (and) their D corps is pretty solid," Carolina defenceman Jaccob Slavin said. "Their forward group is so skilled and solid that I would still say it's Tampa."

That's no knock on the Boston Bruins, who lost Game 7 of the Cup Final to St. Louis. Or the Washington Capitals and Pittsburgh Penguins, who have plenty of Cup-winning experience. The Lightning performed some salary cap gymnastics, kept their core intact and aren't shying away from the well-deserved hype.

"Expectations are high: Of course for everyone the main goal is to win the Cup," Vasilevskiy said. "We're more mature now. We have more experience. ... I think the last few seasons people (say), 'Tampa will win the Cup 100 per cent' every time. That's the expectation, but the reality is every team can win the Cup. We're playing in the best league in the world, so anything can happen."

With Tampa Bay, Boston, Toronto and Florida, the Atlantic Division looks like murderer's row. The Bruins got through only after coming back from a 3-2, first-round deficit against Toronto and aren't feeling cocky.

The Panthers signed two-time Vezina Trophy winning goalie Sergei Bobrovsky and hired three-time Cup-winning coach Joel Quenneville to take the next step. Across the East in the Metropolitan Division, the improved New York Rangers and New Jersey Devils are rejuvenated with some big additions.

Pittsburgh still has Sidney Crosby and Evgeni Malkin, Washington still has Alex Ovechkin and Nicklas Backstrom, and yet each team has undergone a transformation since last lifting the Cup. The Penguins look closer to falling down the East standings at this point, and Crosby acknowledged there are some question marks.

"We're a little bit younger, and in some ways we're maybe a little bit older, too," Pittsburgh's captain said. "We're younger, so I think we're going to be probably a quicker team, probably an energized team and we'll have some guys that are pretty excited to be in the positions they're in. We'll have to see what we can do with that."

The Capitals believe their championship window is still open.

"We expect to be amongst the league leaders in terms of wins and points," coach Todd Reirden said. "That's the culture that we've established now and now we need to continue to build it."

Columbus will undoubtedly take a step back after losing Panarin and Bobrovsky and letting trade deadline pickups Matt Duchene and Ryan Dzingel walk in free agency. Much like the New York Islanders a year ago after losing John Tavares to Toronto in free agency, the Blue Jackets plan to use their personnel defections as a rallying point.

"There's no secret losing those guys probably hurts a little bit, but we're bringing back a lot of our core guys," leading goal scorer Cam Atkinson said. "We have to come in with a chip on our shoulder and prove a lot of people wrong, but I think that it should fuel your fire to prove people wrong."

"The biggest question is goaltending," Atkinson said. "That's going to be the biggest thing. The St. Louis Blues won with a rookie goaltender coming in in the middle of the season and look what happens to that team."

The Islanders let starting goalie Robin Lehner depart in free agency and replaced him with Semyon Varlamov. Coach Barry Trotz's structure remains, but no one's going to underestimate them this time around.

No team since Pittsburgh in 2009 has won the Cup after losing in the final the previous year. Bruins defenceman Torey Krug said the "taste is still there" from the Game 7 defeat at home.

"It will probably always be there," Krug said. "It's how you manage it individually to use it as motivation."

It could be neck and neck between the Blue Jackets, Rangers, Devils, Carolina Hurricanes and Philadelphia Flyers for the final playoff spot. Carolina will need stable goaltending to duplicate a surprise run that ended in the East final. Philadelphia added coach Alain Vigneault, centre Kevin Hayes and defencemen Matt Niskanen and Justin Braun, but remains a bit of a mystery amid inconsistent play.

The Buffalo Sabres will get a boost from new coach Ralph Krueger but more rebuilding is likely. Defenceman Rasmus Dahlin wants the Sabres to "trust the process," which is ongoing not just in Buffalo but also Montreal and Detroit before those teams can target a post-season run. Ottawa's long-term rebuild should set them up for a top draft pick.