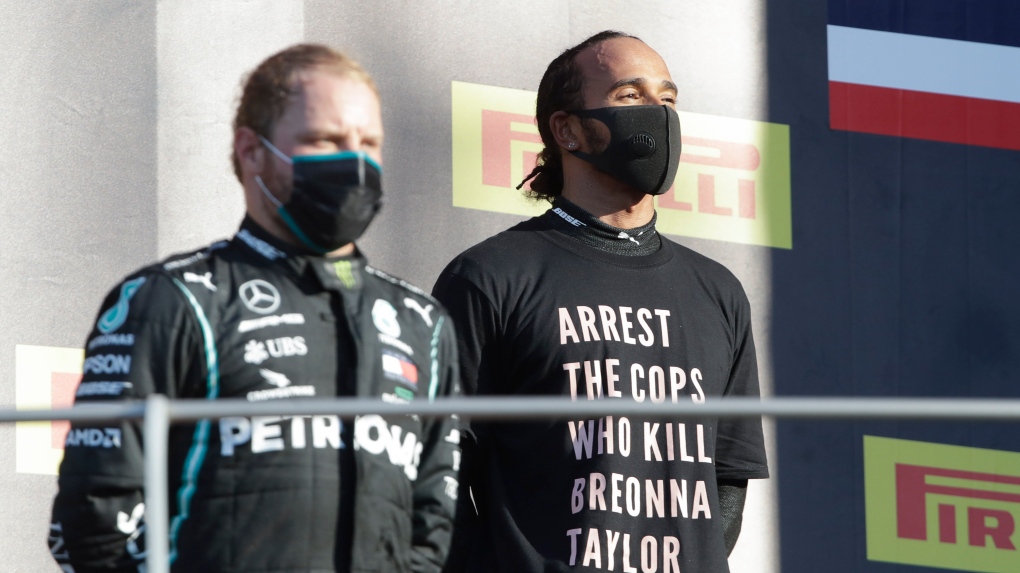 Mercedes driver Lewis Hamilton of Britain, right, is flanked by Mercedes driver Valtteri Bottas of Finland on the podium after winning the Formula One Grand Prix of Tuscany, at the Mugello circuit in Scarperia, Italy, Sunday, Sept. 13, 2020. (AP Photo/Luca Bruno, Pool)

Lewis Hamilton says he remains undeterred in his fight against racial injustice. His comments came as the FIA, motorsport's global governing body, announced it will not investigate the Formula One champion for wearing a T-shirt honouring Breonna Taylor at the Tuscan Grand Prix.

Hamilton, a six-time world champion who claimed the 90th race win of his career on Sunday, wore a T-shirt with the words "ARREST THE COPS WHO KILLED BREONNA TAYLOR" on the front, and "SAY HER NAME" above a photo of Taylor on the back, before the race and at the podium ceremony.

Having originally said it would be considering the matter, the FIA will instead clarify its guidelines as to what will be permitted for drivers and teams both pre and post-race.

The FIA is aiming to put these guidelines in place ahead of the next race of the 2020 season which is scheduled to take place in Sochi, Russia on September 27.

"Want you to know I won't stop, I won't let up, I won't give up on using this platform to shed light on what I believe is right," Hamilton wrote on Instagram.

"I want to thank those of you who continue to support me and show love, I am so grateful.

"But this is a journey for all of us to come together and challenge the world on every level of injustice, not only racial

"We can help make this a better place for our kids and the future generations."

Taylor was fatally shot in her Louisville home in March as three plainclothes police officers executed a "no-knock" warrant.

Kentucky Attorney General Daniel Cameron is conducting an investigation into the incident and the FBI is investigating whether Taylor's civil rights were violated. Taylor's mother has filed a lawsuit in civil court against the three officers identified in connection with her daugher's death.

No officer has been charged with a crime. Two of the officers remain on the force, while a third was fired and is appealing to get his job back.

"It's been 6 months since Breonna Taylor was murdered by policemen, in her own home. Still no justice has been served. We won't stay silent," Hamilton posted on Twitter on Sunday, alongside photos of himself wearing the T-shirt.

He also added in a post-race conference: "It took me a long time to get that shirt and I've been wanting to wear that and bring awareness to the fact that there's people that have been killed on the street and there's someone that got killed in her own house.

The 35-year-old has been a powerful voice during the Black Lives Matter movement by calling on motorsport to do more to combat racism and attending a BLM protest in London earlier this year.

He has also announced plans to set up a commission in his name to increase diversity in motorsport.

Victory at the Tuscan GP means Hamilton is now one short of equaling Michael Schumacher's record of 91 race wins in F1.