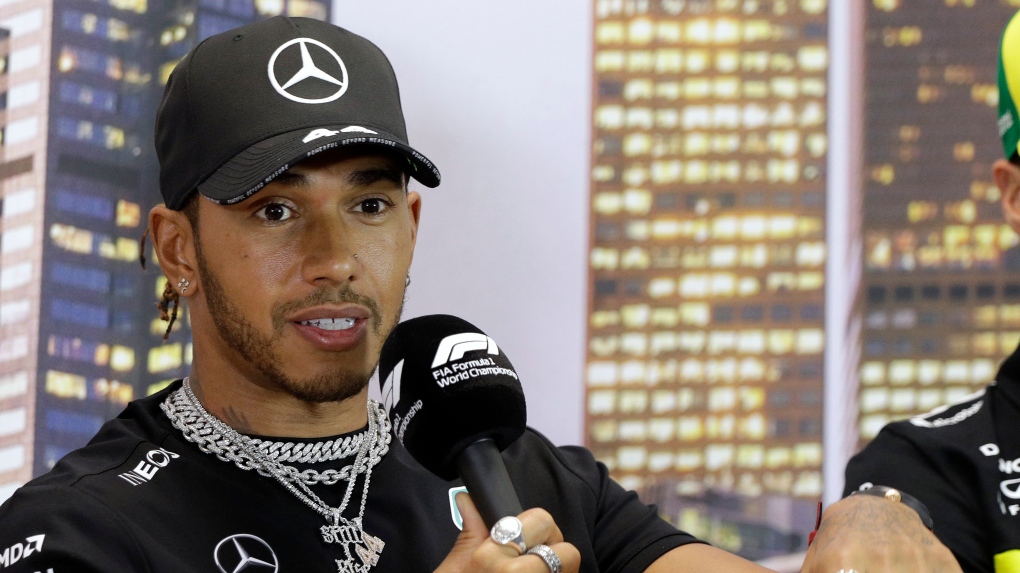 In this March 12, 2020, file photo, Mercedes driver Lewis Hamilton of Britain speaks during a press conference at the Australian Formula One Grand Prix in Melbourne. (AP Photo/Rick Rycroft, File)

SPIELBERG, AUSTRIA -- Formula One champion Lewis Hamilton feels it's his responsibility as a global star to keep pushing for more diversity in his profession and beyond.

Hamilton has spoken widely about racism in recent weeks following the killing of George Floyd -- a handcuffed and unarmed Black man -- by a police officer in Minneapolis in May. Hamilton attended a Black Lives Matter march in London and is setting up a commission to increase diversity in motorsport.

"I've got a platform and I think it would be irresponsible of me not to utilize that to help educate people, to help educate myself and really push for accountability," Hamilton said on Thursday in a video released by his team. "Within all the brands I work with, within the industry I work with."

Hamilton's Mercedes team will be competing in an all-black car -- instead of the usual silver -- as a statement against racism when the season starts on Sunday in Austria.

"Because we are the world champions, we are the best team and we need to shine our light as best as possible to encourage the other teams to want to do the same," Hamilton said. "The sport needs to do more, (governing body) FIA need to do more. We all need to do more."

F1 drivers are discussing whether to take the knee together on the grid before Sunday's race in support of the Black Lives Matter movement, as soccer players have been doing.

After Floyd's death, Hamilton spoke of his "anger, sadness and disbelief."

Wounds from the racism he has endured resurfaced.

"When this all kicked off it really struck a nerve and a chord, brought a lot of emotion up from my personal experiences," he said. "I experienced a lot of racism growing up, both at school and in my local area. Then on the race (driving) scene particularly being that my Dad and I were the only people of colour there."

Things were not better elsewhere in Europe.

"When I got to Italy, when I got to Belgium -- which was one of my first European races -- I experienced the same thing. When I was in France (as well)," Hamilton said. "That was definitely a very, very difficult thing. ... You don't understand when you're young why things are thrown at you, why things have been shouted at you."

Hamilton previously criticized F1 for staying silent on racism, prompting a flurry of support on Twitter from fellow drivers such as Charles Leclerc and Daniel Ricciardo.

"People perceived that I was targeting drivers, I really wasn't. It was targeted at the whole industry," Hamilton said. "People being silent is something I've experienced for such a long time, and now is not the time to be silent. This is a time to help spread the message. We need as many voices as we can to push for change."

Hamilton hopes his commission finds the root cause of why he's still the only Black F1 driver.

"It is an expensive sport and I think that's definitely an underlying factor. The truth is that the opportunity is not the same, not only from the drivers point of view but also the engineers," he said. "I've been working with Mercedes since I was 13. I've also been in Formula One for 14 years and I've hardly seen any change. That upsets me."