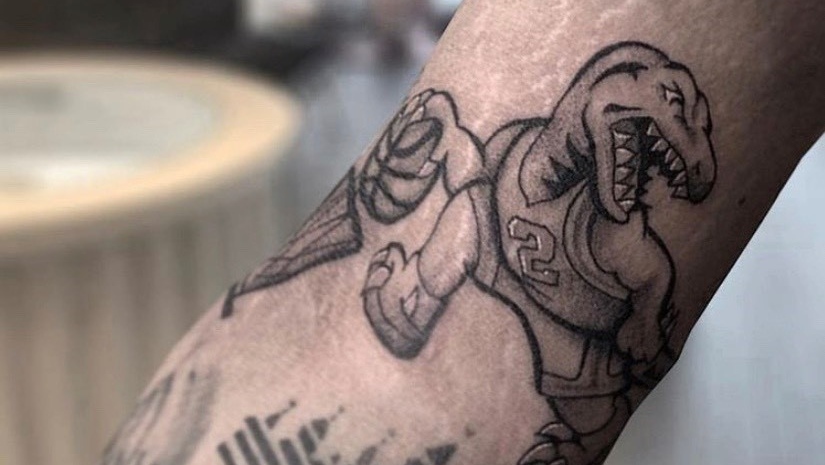 TORONTO -- Kawhi Leonard left a lasting imprint on Toronto Raptors fans when he helped the team win its first NBA Championship in franchise history this summer.

Some fans took that imprint a lot more literally than others.

Sean Martin of Perfect Image in Waterloo, Ont., was one of many tattoo artists in the south-western region of the province that received a strange request after the Raptors' historic win over the Golden State Warriors in June.

"Yeah, the guy wanted 'Fun Guy' on his butt," Martin said, recalling a male in his 20s who walked into his shop a day after Toronto's Game 6 victory.

"He came in as a walk-in, wanted to get it done and I had the time. It took 30 minutes, if that. It was a fair size, probably palm-size, from what I can remember."

The tattoo, which also includes the date of the Raptors' championship -- June 13 -- is a reference to an ad campaign created by New Balance last season.

It came about after a stone-faced Leonard referred to himself as a "fun guy" during his introductory press conference with the Raptors.

Martin, a Guelph, Ont., native who's been a professional tattoo artist for five years, wasn't surprised by the request.

While the tattoo done by Martin was a simple one, other fans went in a more elaborate direction with their Leonard ink requests.

Toronto-based artist J Jajjo transformed an iconic photo of the NBA Finals MVP -- Leonard with goggles over his eyes, an open-mouth smile and the Larry O'Brien trophy in hand as champagne poured down his head -- into a highly detailed black and grey tattoo that covers most of his friend's forearm.

"The night the Raptors won the Championship I was talking with my friend and he said he wanted to get it done asap," Jajjo said. "We found the picture the following day and completed it. (It) took about five hours."

Another fan tattoo -- done by Toronto's Pravin Arudsothy of Black Line Studios -- depicts the cartoon dinosaur from the Raptors old school logo wearing a No. 2 Leonard jersey while gripping the Larry O'Brien trophy in his claw.

"I mocked up the design for (the client)," Arudsothy said of the tattoo, which was done two days after the Raptors championship parade. "He wanted to somehow incorporate Kawhi Leonard and the championship so I added the trophy and the jersey number.

"At first he thought it was risky trading DeMar DeRozan, so when Kawhi delivered it made (the championship) that much more special for him."

Arudsothy posted the photo of that tattoo on his Instagram account on July 9, one day before Leonard officially signed with the Los Angeles Clippers in free agency, ending his one-year Raptors tenure.

Leonard returns to Toronto with the Clippers on Wednesday, when he'll receive his championship ring in a pre-game ceremony.

Martin couldn't say if his client regretted his 'Fun Guy' tattoo after Leonard chose to not re-sign with the Raptors, but the artists sees the appeal of wanting to commemorate a special moment in Canadian sports history, regardless of how a client chooses to do that.

"It's like a historical mark in the NBA and for Toronto and Canada," he said. "If that's what people want to do I can't really judge. I've got all kinds of stuff on me that I'm sure people see and say 'wow why does that guy have that?"'

Jajjo also understood paying homage to Leonard in such a permanent way.

"I believe it was about the moment, a city that hasn't seen a sports championship in a while," he said. "The way the whole season and playoffs unfolded leading up to holding the Larry O'Brien trophy, it was a big accomplishment not just for Kawhi or the team but for the whole organization and the sport in Canada."