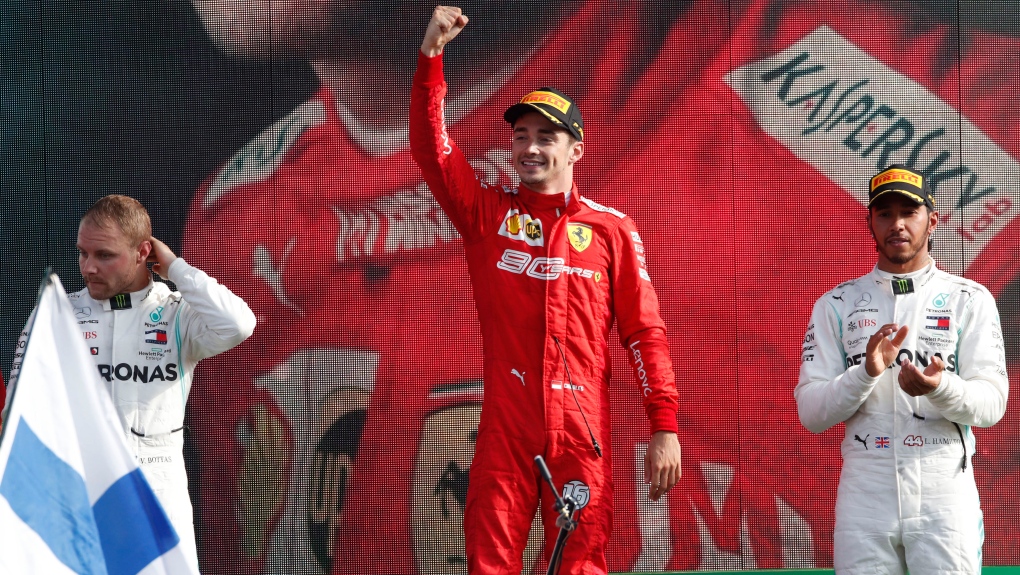 MONZA, Italy -- Charles Leclerc ended Ferrari's nine-year wait for victory at its home circuit as he held off the Mercedes duo to win Formula One's Italian Grand Prix on Sunday.

The 21-year-old Leclerc secured his second successive F1 race win in the process, having recorded his first ever in last week's Belgian GP.

"It really means so much to me," said Leclerc in Italian, as he spoke from the iconic podium at Monza, above a sea of red as thousands of Ferrari fans wearing that colour chanted his name and waved flags.

"It was already a dream come true at Spa, winning here is 10 times more. I don't have words."

Leclerc, who started from pole position, was roared on by the passionate Ferrari tifosi and he let out an equally joyful cry as he crossed the line 0.8 seconds ahead of Valtteri Bottas and 35.1 seconds ahead of championship leader Lewis Hamilton.

"In the last two laps I started to believe that the win was possible. I let all my emotions on the radio, I don't think anyone could understand what I said," said Leclerc with a laugh.

Ferrari's last win at Monza came in 2010 through Fernando Alonso.

"Charles did a great job," Hamilton said. "He came under a lot of pressure from Valtteri and I.

"I did the best I could, but following so closely for so many laps, the tires just went off the cliff. It was not our day."

Hamilton hounded Leclerc, especially after pitting at the end of lap 19 and emerging on medium tires.

Leclerc pitted a lap later and although he managed to come out in front of Hamilton, he was on hard tires.

Shortly afterward, Hamilton almost got past but Leclerc held him off in a move that ended with the Mercedes on the grass. Leclerc was given a black and white warning flag for that but no penalty.

Another defensive move from Leclerc later in the race had Hamilton saying on team radio: "Some dangerous driving going on here."

Max Verstappen was given a five-second penalty for a similar move last year at Monza. When Hamilton was questioned about it, he replied tersely: "I guess the stewards woke up on a different side of the bed this morning, I don't know."

Any hope Hamilton had of snatching victory slipped away with 11 laps remaining as he made a mistake at the first corner, ending up on the escape road and allowing Bottas to take second.

With that, Hamilton gave up his pursuit of Leclerc and instead pitted for fresh tires in order to set the fastest lap and get the bonus point.

Bottas took over the attack on Leclerc and, on fresher tires, kept gaining but locked up with two laps remaining, paving the way for an emotional win for Leclerc, who recorded the first victory of his F1 career at last weekend's Belgium GP.

"The race felt a lot longer than 53 laps but the moment I crossed the finish line to now is just pure happiness," Leclerc said.

Leclerc's teammate Sebastian Vettel had a miserable race as he was given a 10-second stop/go penalty early on for returning to the track unsafely after spinning off at the Ascari chicane and almost causing an accident with Lance Stroll.

"He just came back onto the circuit like an idiot!" Stroll said on team radio.

Vettel, a four-time world champion, finished 13th and a lap behind Leclerc.

Hamilton saw his championship lead trimmed by two points but is still 63 points ahead of Bottas with seven races remaining.