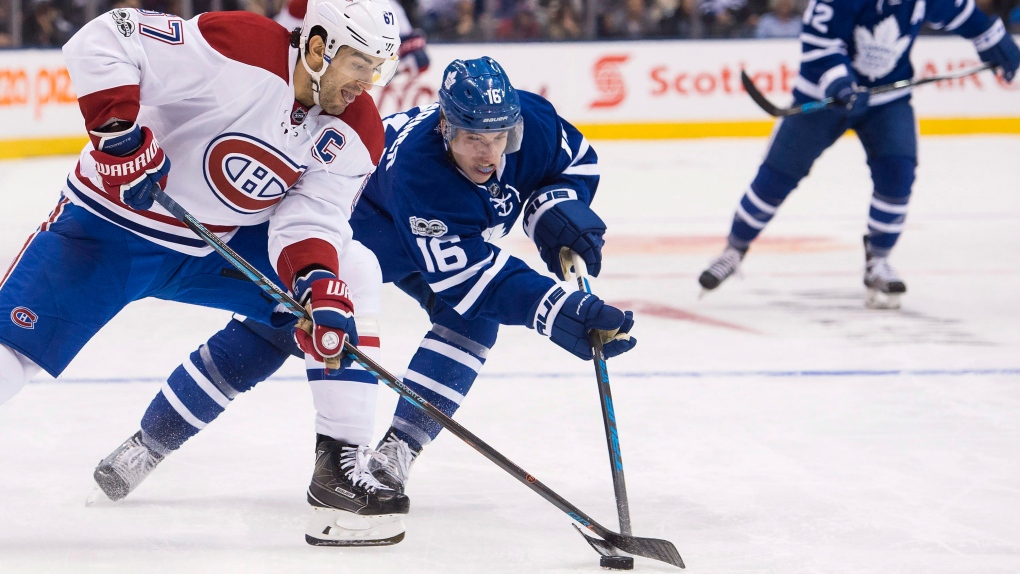 The Leafs lost their 13th consecutive game to the Canadiens on Saturday night, downed 5-3 at the Air Canada Centre. Toronto is 0-9-4 during that span.

Max Pacioretty, Artturi Lekhonen, Alex Radulov, Nikita Scherbak and Michael McCarron all found the back of the net for the Canadiens, Carey Price turning aside 33 shots in his 20th win this season (20-5-4).

It was the last of seven straight on the road for Montreal (4-1-2), which has won four of the last five games. Head coach Michel Therrien notched his 400th career victory in the win.

Frederik Andersen gave up five goals on 31 shots for the Leafs, who had their seven-game point streak snapped in the loss.

A fast-paced first period started quick with Pacioretty getting on the board 20 seconds in. The Montreal captain was set up in the slot by Radulov, who circled the Toronto net before finding his teammate in front. It was the 19th goal for Pacioretty this season and fourth in the last three games.

Lehkonen followed him up just over three minutes later, beating Andersen under the right arm while streaking down the right side during a Canadiens rush.

The Leafs erased the two-goal deficit by scoring on consecutive power plays.

Bozak got the first on a fabulous set up by Marner, the 19-year-old dropping a no-look pass to his senior teammate as he slid through the slot.

Kadri evened the game up at two with Radulov in the box for hooking. He banged home a Marner rebound for his 16th goal of the year. It was his third straight game with a goal and sixth in the past nine outings.

Scherbak gave Montreal the lead back with 0.9 seconds left in the first, the 21-year-old earning his first NHL goal on another power play. A 2014 first-round pick of the Habs, Scherbak was playing in his first NHL game, recalled from St. John's of the AHL after Brendan Gallagher broke his hand in Dallas.

Scherbak, who has 20 points in 27 AHL games this year, took a point pass from Jeff Petry and undressed Andersen, who surrendered three goals on 11 shots in the first. The Dane was starting on back-to-back nights for the third time this season, yielding two goals on 32 shots in a win over New Jersey on Friday.

Radulov, who extended his point streak to six games (four goals, eight points), upped the Montreal lead back to two on a power play 36 seconds into what became a testy second period.

Emotions intensified when Leaf tough guy Matt Martin threw a hard hit on Petry, which enraged Bobby Farnham, who charged at Martin when the whistle blew. Fights eventually broke out between Farnham and Toronto rookie Frederik Gauthier as well as Martin and McCarron.

Almost three minutes later Zach Hyman took a puck strong to the Habs crease, bowling over Price with help from a shove by Canadiens defenceman Alexei Emelin. Hyman was immediately jumped on by Shea Weber and dealt a two-minute penalty for goalie interference.

Price shook off the blow and came up with a number of big stops as the period wore on, including a right pad save on a Hyman wraparound attempt.

Van Riemsdyk cut the deficit again to one on another tremendous play by Marner. With puck in tow, the Toronto area native whirled through the entire Montreal zone before dishing off to van Riemsdyk on the door-step, the American winger promptly tapping in his 14th goal this year.

Marner added his third assist on the night on the play and 32nd point in 39 games this season. He trails only teammate Auston Matthews (35 points) and Winnipeg's Patrik Laine (37) in the NHL rookie scoring race.

It was third time already this year that Marner has had three assists in one game. Matthews' eight-game point streak (12 points) came to an end in the loss.

McCarron drove the Habs' lead back to two in the opening minutes of the third, his shot from just above the goal line beating a shaky Andersen. The Leafs No. 1 has given up four goals or more in three of his last four starts.

Toronto's nearly three-year slide against Montreal comes over a period of significant organizational reshuffling. Team president Brendan Shanahan and head coach Mike Babcock, notably, were hired after the Leafs last beat the Canadiens in Jan. 2014. Only six players from that year's squad -- five that played in the win -- remain with the team today, including van Riemsdyk, Bozak, Kadri, Leo Komarov and defenders Morgan Rielly and Jake Gardiner.