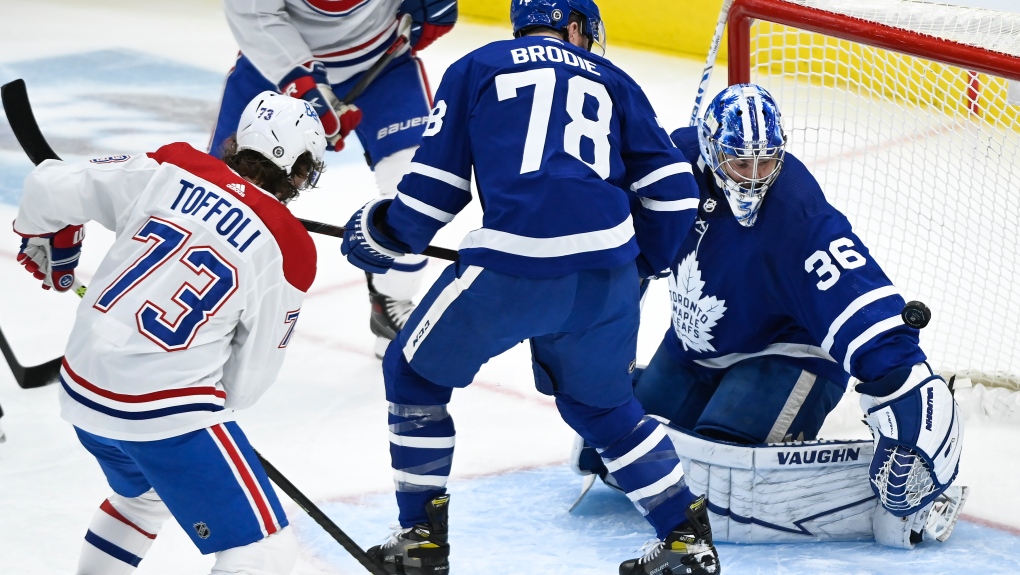 The Toronto Maple Leafs are getting their first doses of a COVID-19 vaccine on Sunday, but the team won't have relaxed virus protocols like some of their American counterparts.

The NHL announced Saturday it is changing some of its protocols for fully vaccinated teams.

The changes will likely only affect American teams in the immediate future, with the vaccination rollout further behind in Canada.

A Leafs spokesperson confirmed team members will receive their first doses on Sunday in an email to The Canadian Press.

"I think our team has done a great job following all the protocols that were set in place," Leafs winger Wayne Simmonds said after his team clinched first place in the North Division with a 3-2 win over the Montreal Canadiens on Saturday night.

"We've waited our turn, and now vaccines are becoming more readily available. I think it's great that we get the opportunity now to get in line and get our vaccines. Hopefully everyone else joins in ... as long as they're comfortable with it, obviously. But I think it's a big thing for our team."

Leafs defenceman Justin Holl said the season has been a challenge.

"This has been a weird year in the sense that a lot of people in general, and our team specificially, are kind of walking on egg shells trying to make sure we don't get anybody sick," he said. "This will just be another added benefit in our COVID world."

South of the border, teams will have even more freedom.

"It could be really big, I think, just for the mindset of the players, more than anything, just to get back to some sort of normalcy," Carolina Hurricanes coach Rod Brind'Amour said Saturday. "The playoffs are a grind, just like this season has been, so any type of getting your mind away from it by being around the guys I think will help."

The changes include loosened restrictions on indoor and outdoor dining, testing frequency and mask-wearing and quarantine requirements. The defending Stanley Cup champion Tampa Bay Lightning are among the teams that have already reached the 85% threshold.

Under the new regulations, fully vaccinated individuals can dine outdoors or inside (in a private section or room with masked servers), visit each other's hotel rooms, go golfing and have other social gatherings without masking or distancing requirements. They also won't have to quarantine for potential exposure or be subject to testing on off days, and in some cases rapid tests prior to games.

"I think it'll be an ease for players: `Hey, this has been worth it. We've been grinding, grinding. OK, now we're seeing things change a little bit,"' New York Islanders coach Barry Trotz said. "I think it'll give a boost of energy to all involved."

The league had maintained strict COVID-19 rules since the start of the season and added more protections in February when cases were increasing. Team staff and family were instructed Feb. 11 to avoid public settings and even get groceries delivered, restrictions that have been in place since.

"We've been in total isolation," Vegas Golden Knights goalie Robin Lehner said last month. "We can't get out of our house. We can't go out of our hotel. We can't do anything. And it's been over a year now, and no one ever talks about the mental health impact about that stuff."

The NHL is the last of the major four North American pro sports leagues to announce plans to relax virus protocols for teams based on vaccination levels. As of Friday, five of Major League Baseball's 30 teams had reached the 85% vaccinated level to relax protocols.

This move is likely to affect the 12 U.S. playoff teams first because vaccinations have lagged for those in Canada. As of Friday, roughly a third of those in the U.S. are fully vaccinated compared with just more than 3% in Canada.

"It all comes down to the government guidelines, and it's out of our control," U.S.-born Winnipeg Jets goalie Connor Hellebuyck said earlier this season. "You definitely see the States getting out the vaccinations well and it's very good, very nice, and it'd be nice to see that in Canada, but I don't know the logistics of it all."

Along with players, coaches and other staff, fully vaccinated officiating crews also can also take advantage of the relaxed protocols if both teams of the playoff series they are working are also considered fully vaccinated.

"It'll be nice for us to be able to go out for lunch or dinner and sit out on a patio," Hurricanes defenceman Brady Skjei said. "We haven't been able to do that for a while. Just to get that team bonding, that part of it. We've obviously been together the whole year and been in the hotel rooms together. But, yeah, it'll be awesome to get outside and get some fresh air."

- With files from Joshua Clipperton in Toronto and The Associated Press.