Lazio soccer club may appeal against 'severe punishment' for racism 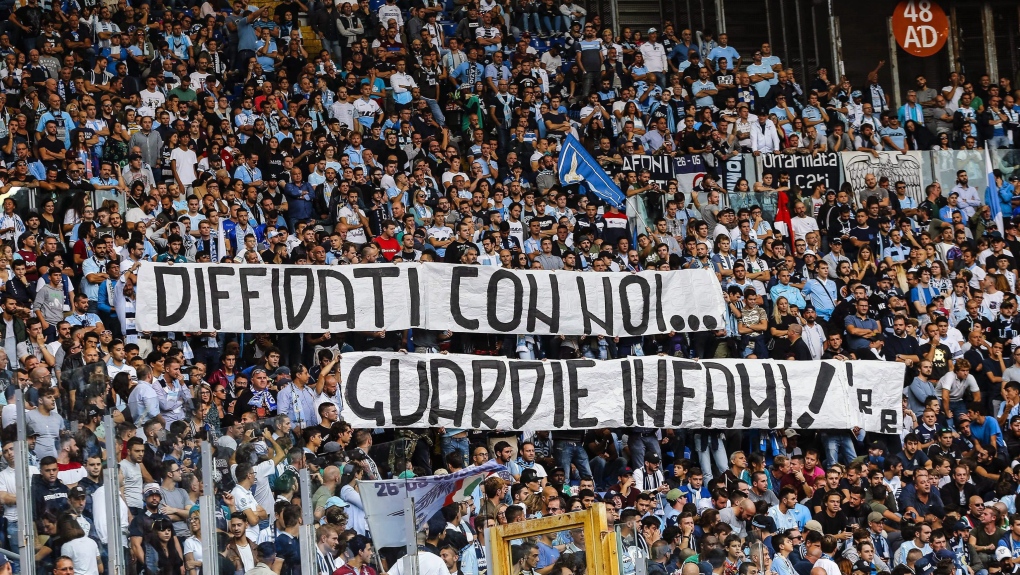 In this Oct. 1, 2017 file photo, Lazio fans display a banner reading in Italian "Banned fans with us, vile cops" during a Serie A soccer match between Sassuolo and Lazio at the Olympic stadium in Rome. Lazio fans have a long history of racism and anti-Semitism but the Roman club's supporters established a new low on Sunday, Oct. 22, 2017 when they littered the Stadio Olimpico with superimposed images of Anne Frank - the young diarist who died in the Holocaust - wearing a Roma jersey. (Angelo Carconi/ANSA via AP, files)

ROME -- Lazio says it may appeal against UEFA's "severe punishment" for the racist behaviour of some of the Italian club's fans during a recent Europa League match.

As well as racist chanting in the Oct. 3 match against Rennes, some Lazio fans also made fascist salutes during their team's 2-1 victory.

UEFA is not expected to publicly announce its ruling until after its disciplinary committee meets Thursday but Lazio released a statement on Tuesday, indicating that it has already been informed of sanctions.

It says the "decisions of UEFA's 'Control, Ethics and Disciplinary Body' ... constitute a severe punishment which appears to have taken into account the clear condemnation swiftly expressed by the Biancocelesti club against the odious racist behaviour of a few irresponsible people."

Lazio reiterated its intention to pursue those responsible in criminal and civil courts but also adds that it reserves the right to appeal "on the basis of the outcome which still has to be finalized."

Lazio had to play the match against Rennes with a stand closed after previous racist chanting and it could see more of its stadium -- or potentially all of it -- shut down, especially with the pressure on UEFA after more racist chanting blighted England's 6-0 win in Bulgaria on Monday.