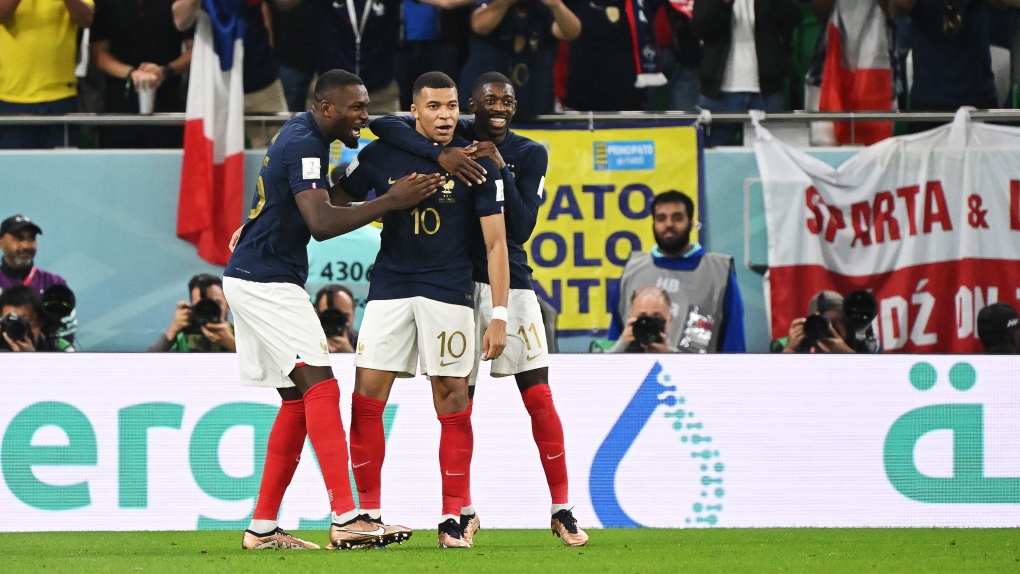 It all seems so straightforward -- laughable, perhaps -- for Kylian Mbappe when it comes to the World Cup.

The France forward, who scored four goals when he led his country to the title four years ago as a 19-year-old phenom, put on yet another demonstration of how devastating he can be on the soccer field.

After it was over, Mbappe almost seemed to be chuckling as Robert Lewandowski came over to congratulate him following his spectacular display.

Mbappe scored two goals Sunday and set up another for Olivier Giroud to give France a 3-1 victory over Poland and move the 2018 champions within three wins of successfully defending their title. He already has a tournament-best five goals in Qatar as Les Bleus have reached the quarterfinals for the third straight World Cup.

Lewandowski, a two-time FIFA player of the year, scored from the penalty spot in second-half stoppage time for Poland.

Mbappe scored his first goal in the 74th minute when he was left unmarked to blast in a long-range shot following a counterattack. He added another in stoppage time when Poland goalkeeper Wojciech Szcz─Ösny could only get a weak glove on another powerful shot from the man in the No. 10 shirt.

"He can change a match in just a moment and he's always playing with such joy and we all want to share those smiles with him," France coach Didier Deschamps said. "France needed a great Kylian Mbappe tonight and they got one."

Having also provided two assists, Mbappe has easily been the most productive player in Qatar.

After his latest exploits, Mbappe explained why he hadn't addressed the media in Qatar before Sunday.

"I needed to focus on the tournament and my soccer," he said through a translator, adding that he had volunteered to pay a French federation fine for his silence. "When I want to concentrate on something that's the way I function. And that's why I didn't want to come speak to you before now.

Mbappe celebrated his second goal by waving his arms for the crowd to cheer louder. Then he hoisted himself up onto the crossbar shortly after the final whistle in another celebratory gesture in front of France's fans.

Mbappe already has nine career World Cup goals and if he stays healthy, he could probably play in another three editions of soccer's biggest event -- meaning he might approach the World Cup career scoring record held by Germany striker Miroslav Klose, who scored 16 goals over four World Cups.

"He hurt us today but I am cheering for him because he is a real star," Poland coach Czes┼éaw Michniewicz said through a translator. "I'm talking about (Lionel) Messi, (Cristiano) Ronaldo, Lewandowski. If someone is going to take over, I think Mbappe will be the player to be the best one (for) many years."

No country has repeated as World Cup champions in six decades -- since Brazil achieved the feat by claiming consecutive trophies in 1958 and 1962. Italy is the only other nation to have won two straight, in 1934 and 1938.

France's quarterfinal opponent will be either England or Senegal.

While Lewandowski is a prolific scorer himself, he's never come close to winning a major title with a Poland team that struggles to get him the ball.

Mbappe, by contrast, is supported by a large array of talented players -- even though half a dozen top France players are out injured.

The French team took the lead when Mbappe threaded a pass to Giroud and the AC Milan striker quickly slotted the ball into the far corner. It was Giroud's 52nd career international goal -- breaking a tie with Thierry Henry on France's all-time scoring list.

After Mbappe leaped into Giroud's arms to celebrate, pumping his fists, Giroud held up seven fingers to the cameras -- five on one hand and two on the other for "52."

It's all the more sweet for Giroud because he wasn't even supposed to be a starter on this year's squad until Ballon d'Or winner Karim Benzema was ruled out because of injury. Giroud also scored two goals in France's opening 4-1 win over Australia.

On a record-setting night for France, goalkeeper Hugo Lloris matched the national team mark of 142 appearances held by Lilian Thuram.

With two European teams playing, there weren't all that many supporters of either country inside Al Thumama Stadium except for small pockets of France fans beating drums behind one goal and red-and-white clad spectators chanting "Polska" behind the opposite goal. There were also plenty of empty seats.