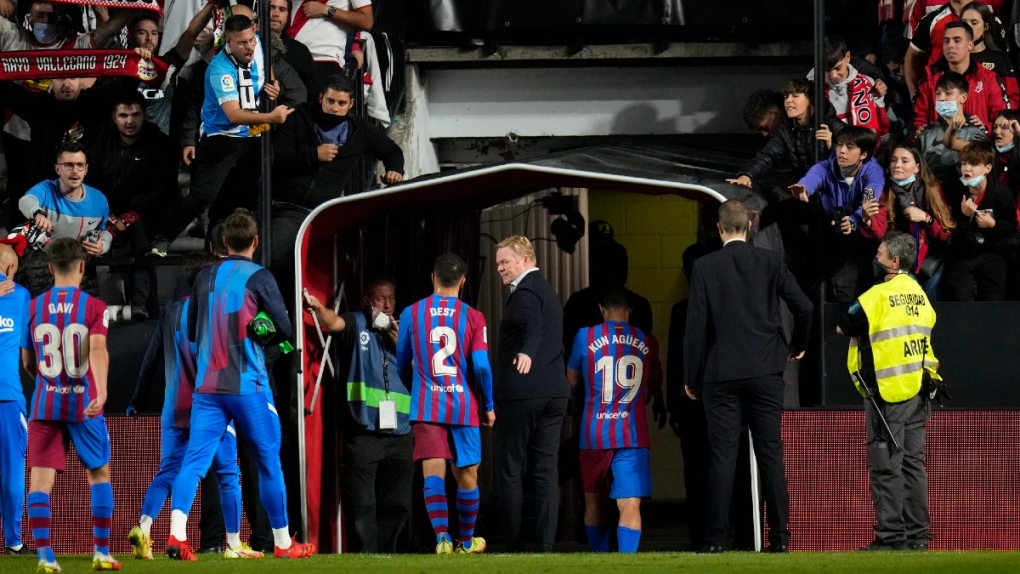 With its coffers depleted and a critical Champions League match right around the corner, Barcelona was looking for a new coach on Thursday after it named a caretaker coach following the firing of Ronald Koeman.

The Spanish club said that reserve team coach Sergi Barjuan will temporarily lead the squad until it finds a permanent replacement for Koeman. Barjuan is a former Barcelona defender. The club said that he will be in the dugout for Saturday's Spanish league match against Alaves.

Former midfielder Xavi Hernandez, who for years has been linked to a return to the club he helped lift to its greatest heights as a player, appears to be the leading candidate to take over on a full-time basis. First, however, the 41-year-old Xavi would have to free himself from his job coaching Qatari club Al-Sadd.

Xavi turned down the chance to coach Barcelona in January 2020 when former president Josep Bartomeu, who resigned amid scandals one year ago, offered him the post after firing Ernesto Valverde in the middle of the season.

"When they offered me (the job), I had barely been coaching for three months," Xavi said last week. "But now it is different. I have more experience, and I am learning a lot here (with Al-Sadd)."

Next week, Barcelona faces a trip to Ukraine to play Dynamo Kyiv in a match it will need to win to boost its chances of continuing its two-decade long run of reaching the Champions League knockout rounds.

Koeman had justified defeats to Bayern Munich, Benfica, Atletico Madrid and Real Madrid this season by arguing that his team was simply no longer among Europe's elite after its financial troubles forced it to shed the wages of Lionel Messi and other top talents. He also insisted that injuries among his attacking players had limited its effectiveness.

Less than a month ago, club president Joan Laporta had publicly backed Koeman, asking fans to be patient as the team undergoes a rebuilding project.

But Koeman's credit ran out after Wednesday's 1-0 defeat at Rayo Vallecano, a modest rival that had not beaten Barcelona since 2002. Barcelona, the dominant Spanish league team over the past two decades, is in ninth place in the standings.

Koeman, a former defender, took over Barcelona when its economic crisis was just being felt following a devastating 8-2 loss to Bayern at the end of the 2019-20 season that cost predecessor Quique Setien his job. The Dutchman was remembered as a fan favorite for his winning goal in the 1992 European Cup final.

The 58-year-old Koeman led Barcelona to last season's Copa del Rey title, but it exited the Champions League in the round-of-16 and finished the Spanish league in third place.

Koeman did, however, set the foundation of a rejuvenated Barcelona by bringing youngsters Pedri Gonzalez, Gavi Paez, Ronald Araujo and Oscar Mingueza into his starting lineup and making Ansu Fati one of the team's leaders along with veterans Sergio Busquets, Gerard Pique and Jordi Alba.

But its trouble scoring -- one goal in three Champions League matches -- and its inability to respond to adversity once behind showed that Koeman's team was not performing up its potential.

"We showed that we had talent, but it wasn't enough," Koeman said hours before he was let go.

Koeman had left his job coaching the Netherlands to return to Barcelona, a fact that Laporta had also cited when he had given him a reprieve. He previously coached several teams, including Everton, Southampton, Valencia, Benfica and Ajax, among other Dutch clubs.

The 49-year-old Barjuan played for Barcelona as a left back from 1993-2002 before finishing his playing career with Atletico. He was appointed Barcelona's reserve team coach in July.