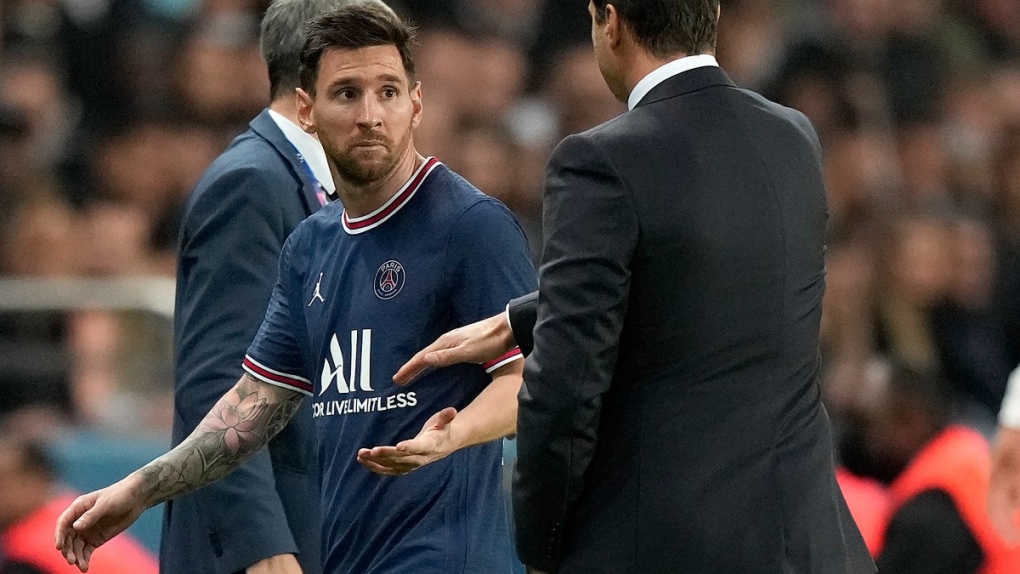 PSG's Lionel Messi looks at PSG's head coach Mauricio Pochettino after he was substituted during the French League One soccer match between Paris Saint-Germain and Lyon at the Parc des Princes in Paris, on Sept. 19, 2021. (Francois Mori / AP)
PARIS -

Lionel Messi will miss Paris Saint-Germain's next French league game at last-placed Metz after a knock to his left knee.

A scan confirmed "the signs of bone contusion," PSG said in a statement on Tuesday. Another assessment of Messi will be made in 48 hours.

Messi was taken off in the 75th minute of his home debut on Sunday, when PSG beat Lyon 2-1 in the league.

PSG coach Mauricio Pochettino said he took the decision to replace Messi after noticing the six-time Ballon d'Or winner repeatedly touched his knee. Messi, who hit the crossbar with a curling free kick, looked angry at being taken off.

"I'm really happy with what he did during the match, he played a great first half," Pochettino said during a news conference. "All the great champions don't want to leave the pitch."

Messi is still chasing his first PSG goal following his shock move from Barcelona this summer.

PSG's win against Lyon extended the club's perfect start to the season ahead of Wednesday's trip to Metz. PSG has won its first six league matches to open a five-point lead over second-placed Marseille, which has one match in hand.

The federal government has announced a suite of changes to the popular income and business support programs put in place during the pandemic and set to expire on Saturday. Deputy Prime Minister and Finance Minister Chrystia Freeland reminded Canadians on Thursday that the measures were always intended to be 'temporary.'

Instead of issuing a singular federal national COVID-19 vaccine passport, the federal government says that each province and territory will be responsible for issuing a 'standardized pan-Canadian' vaccine passport that Canadians can use when travelling. Each province's system is supposed to have a 'common' look and feel, with the expectation that by next month all Canadians will have access.

The U.S. House voted Thursday to hold Steve Bannon, a longtime ally and aide to former U.S. president Donald Trump, in contempt of Congress for defying a subpoena from the committee investigating the violent Jan. 6 Capitol insurrection.

As he prepares to launch a new media company that will give him his own social media platform, former U.S. President Donald Trump has ramped up his efforts to rewrite history, spreading more lies about the 2020 election in November and the deadly storming of the Capitol in January.

A police superintendent in Jamaica told The Associated Press on Thursday that authorities have arrested a Colombian man they believe is a suspect in the July 7 assassination of Haitian President Jovenel Moise.

As tourism resumes across much of the world, experts say purchasing travel insurance is necessary if Canadians want to stay safe and enjoy a trip abroad.