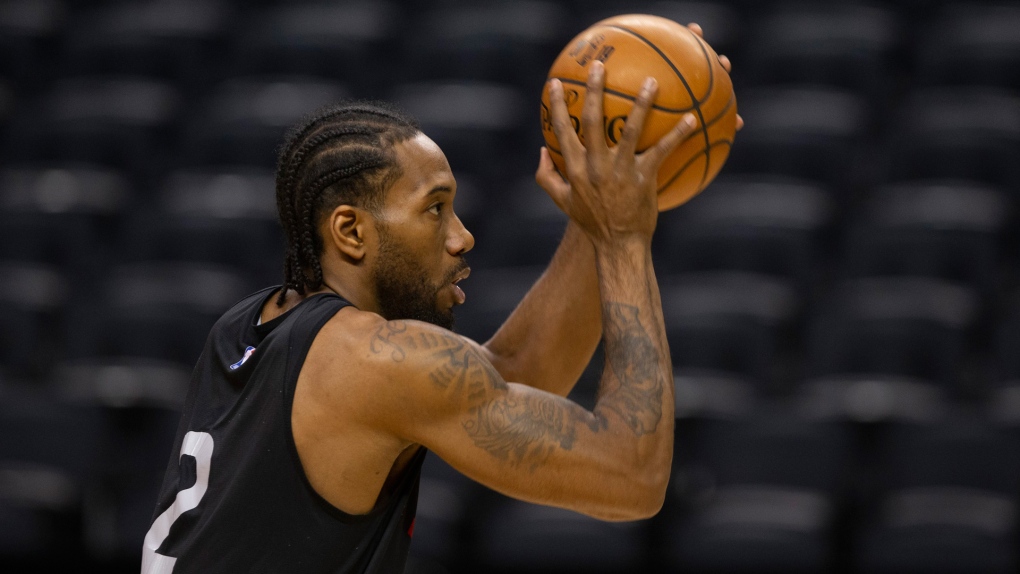 Toronto Raptors' Kawhi Leonard shoots during practice in Toronto on Sunday June 9, 2019, ahead of Monday's game five of the NBA Finals against the Golden State Warriors. THE CANADIAN PRESS/Chris Young

Kevin Durant, Kyrie Irving and DeAndre Jordan agreed to deals with Brooklyn to start one of the wildest days in NBA free agent history.

Al Horford went from Boston to the rival 76ers. Kemba Walker is a Celtic after eight seasons with the Charlotte Hornets in a sign-and-trade for Terry Rozier. Khris Middleton (Milwaukee) and Tobias Harris (Philadelphia) agreed to big extensions.

The Knicks missed out on the biggest targets before adding Julius Randle and Bobby Portis among their agreements with five players.

All totalled, there were more than $3 billion in contracts in the first full day. The show goes on, with plenty more players available who could help change the complexion of the league for years to come.

Leonard is the premier free agent remaining. The two-time NBA Finals MVP led the Raptors to their first championship, averaging 30.5 points and 9.1 rebounds in 24 playoff games.

Cousins missed more than half of last season while recovering from a torn Achilles tendon, but came back to help the Warriors notch the No. 1 seed in the Western Conference. The 28-year-old was then hurt again in the playoffs and appeared in only eight games, averaging 7.6 points in 16.6 minutes.

The two-time NBA champion played an important role in Toronto's run, sinking 3-pointers and playing elite defence over 24 playoff starts. Green joins Leonard in free agency one year after both were traded to the Raptors from San Antonio.

Looney played a vital role for the Warriors in the playoffs, especially in the absence of Durant and Cousins. The 23-year-old averaged 7.1 points and 4.5 rebounds in 21 playoff games. The Warriors have a massive hole on defence, one that Looney may be called on to fill.

Hollis-Jefferson's ability to guard any position, coupled with his elite wingspan, make him an asset for any team in the modern NBA. However, the 24-year-old averaged 8.9 points and 5.3 rebounds in a down season. The Nets renounced his rights, allowing him to become an unrestricted free agent, which helped open the door for Durant and Irving's arrival.

The 29-year-old could be the third starter to leave Boston this off-season. Morris averaged 13.9 points and 6.1 rebounds in 2018-19. The fiery big man was perhaps the team's most consistent player in an otherwise inconsistent season. Despite championship aspirations, Boston flamed out in the second round against Milwaukee.

The former No. 2 overall pick has suffered two ACL tears in his left knee and no longer has the bright future once expected for him. Parker posted a serviceable 14.5 points per game with the Chicago Bulls and Washington Wizards last season.

The 13-year NBA veteran played with his sixth team in five years in a tumultuous season with the Los Angeles Lakers. Rondo averaged 9.2 points and 8.0 assists for a team that did not meet its lofty expectations and missed the playoffs.