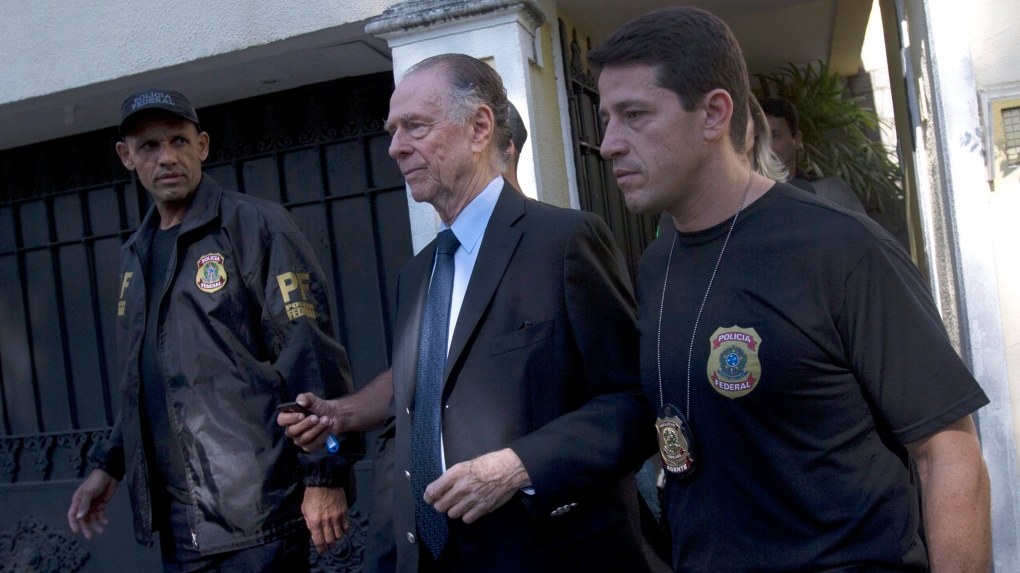 Carlos Nuzman, president of the Brazilian Olympic Committee, center, is escorted by federal police officers after being taken into custody at his home, in Rio de Janeiro, Brazil, Oct. 5, 2017. (AP / Silvia Izquierdo)

RIO DE JANEIRO -- Carlos Nuzman, who headed the Rio de Janeiro Olympics, will remain in prison under a judge's order issued on Monday.

Nuzman was arrested last week and held temporarily in an investigation into a vote-buying scheme to win the rights to host the 2016 Olympics in Rio.

The judge's order changed Nuzman's status from temporary detention to preventative detention. Nuzman's lawyer, Nelio Machado, said there was no timeframe for Nuzman's release from jail.

Brazilian and French authorities say Nuzman was a key figure in channeling at least $2 million to Lamine Diack, a former International Olympic Committee member from Senegal who helped sway votes for Rio.

Nuzman's detention is the latest blow to last year's Olympics, which were troubled throughout with sluggish ticket sales, budget cuts, and a debt that required a government bailout to hold the Paralympics. Many sports venues built for the games are vacant.

The IOC suspended Nuzman last week from his role as an IOC honorary member. It also suspended the Brazilian Olympic Committee, which was headed by Nuzman.

The 75-year-old Nuzman was also removed from his role on an IOC advisory commission organizing the 2020 Tokyo Olympics.

Investigators have said they identified 16 gold bars, weighing 1 kilogram (2.2 pounds) each, located in a depository and reported to belong to Nuzman. Their value on the market is about $750,000.

Authorities said Nuzman was arrested because he tried to hamper the investigation by regularizing assets likely gained with illicit money.

Nuzman was originally questioned in September. About two weeks after, investigators said he amended his tax declaration to add about $600,000 in income.

The IOC last week also suspended the organizing committee. The committee has sought IOC help to pay off some of the debt.

The organizing committee is scheduled to meet next week to choose a new president, which may help lift the suspension.

The Brazilian Olympic Committee is meeting this week to name a replacement for Nuzman.