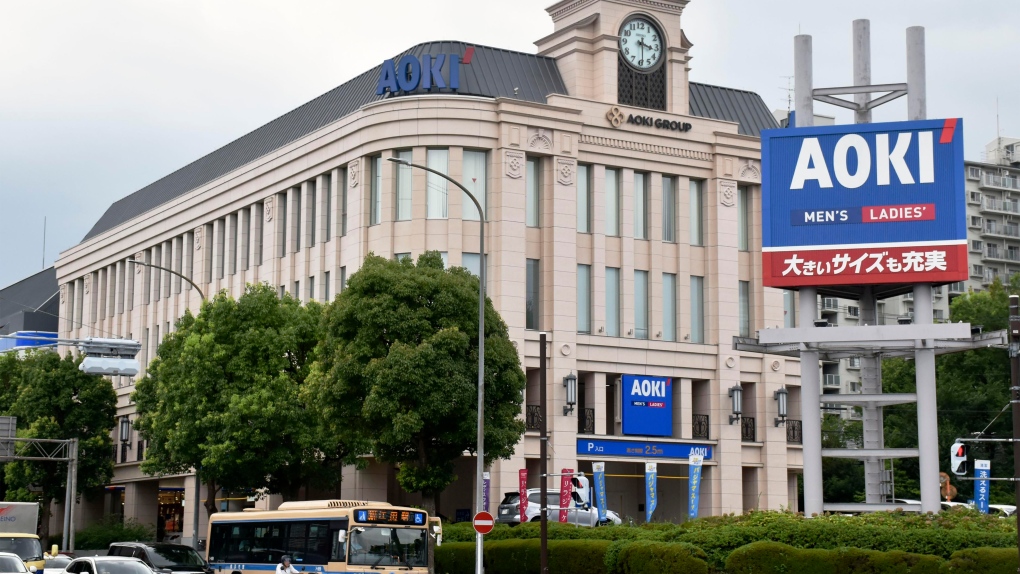 This photo shows the headquarters of Aoki Holdings Inc., a clothing company, in Yokohama, near Tokyo Wednesday, Aug. 17, 2022. A former Tokyo Olympic organizing committee board member and three people from the clothing company that was a surprise sponsor of the 2020 Games were arrested on bribery suspicions Wednesday. (Kyodo News via AP)
TOKYO -

A former Tokyo Olympic organizing committee board member and three people from a clothing company that was a surprise sponsor of the 2020 Games were arrested on bribery suspicions Wednesday.

Haruyuki Takahashi, 78, a former executive at advertising company Dentsu, is suspected of receiving bribes from the former head of Aoki Holdings Inc. and two company employees, the prosecutors' office said.

Aoki, which produces "recruit suits" that youngsters fresh out of school wear for job interviews and their first jobs, was a surprise pick to dress the Japanese Olympic team when other nations had top fashion brands designing their athletes' outfits.

The alleged bribery, totaling 51 million yen (US$380,000) deposited into a bank account of Takahashi's company from October 2017 to March this year, is believed to be linked to sponsorship of the games and products related to the Olympics, the Tokyo District Prosecutors said in a statement.

Although corruption at top levels among Olympic officials had long been rumored, the arrest comes as a blow to Japan's Olympic ambitions.

Takahashi is credited with landing US$3 billion in local sponsorships for the Tokyo Games. Dentsu is a key player in many major Japanese events, including the Olympics. Japan also is pursuing the 2030 Winter Olympics for Sapporo.

Takahashi left the Dentsu board in 2009, but continued to wield considerable influence in the advertising and event organizing sector in Japan and headed his own company.

Aoki said it was still looking into the matter and did not have immediate comment. The Japanese Olympic Committee was not immediately available for comment.

Also arrested were Hironori Aoki, 83, who founded Aoki, his younger brother and deputy at the company Takahisa Aoki, 76, and Katsuhisa Ueda, 40, an executive at a group company, prosecutors said. The dubious payments were made more than 50 times, they said.

Prosecutors had raided Hironori Aoki's Tokyo home last month. Speculation is growing there may be even more arrests. Seiko Hashimoto, a lawmaker who was in charge of the Tokyo Olympics, has promised to cooperate with the investigation.

Tokyo hosted the 2020 Games, which included the Paralympics, with much fanfare -- as well as criticism, especially over the ballooning costs -- in summer 2021. The event was postponed by a year and held with no public ticket sales because of the coronavirus pandemic.

That came as a disappointment, as the games were supposed to drum up tourism revenue and put a spotlight on Japan's prowess in a similar way as the 1964 Tokyo Olympics did.

The official price tag for the latest Tokyo Games was US$13 billion, mostly public money. That was double the initial estimate when the International Olympic Committee awarded Tokyo the event, but less than the US$25 billion some had predicted.