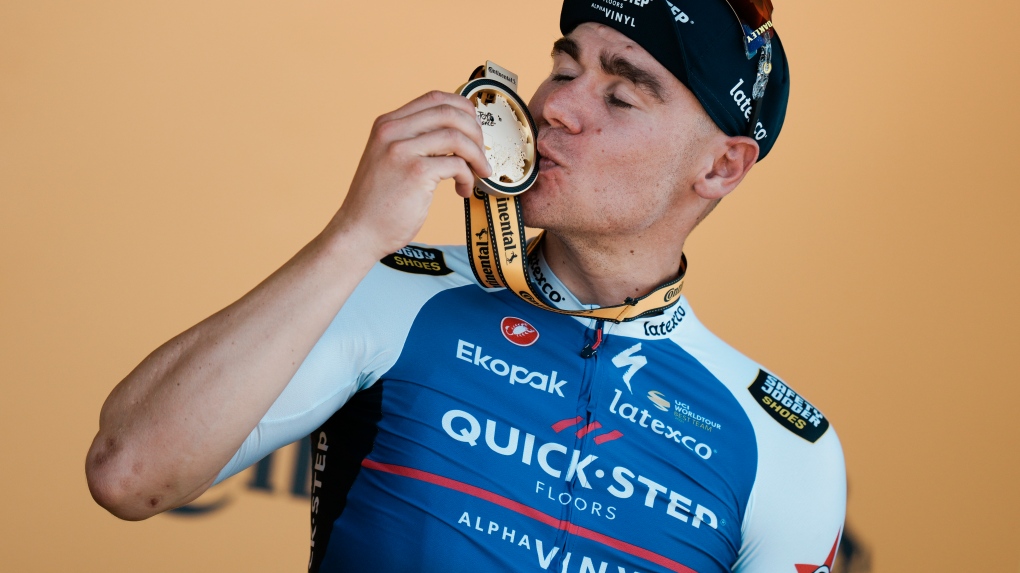 It was a first Tour stage win for Jakobsen and a second in two days for the Quick-Step Alpha Vinyl team after Yves Lampaert's win in Friday's time trial.

But Van Aert took the yellow jersey for the first time with a six-second bonus for finishing second, to lead Lampaert by one second overall.

"It's a great pleasure for me to wear the jersey. I've tried to get it many times. I'm very happy and proud," Van Aert said. "This is the biggest cycling race in the world so of course I will try to defend it."

Van Aert also has the green jersey for best sprinter and is Primož Roglič's teammate on the Jumbo-Visma team.

Hugo Houle of Sainte-Perpetue, Que., was the top Canadian in 21st.

Pogačar remained nine seconds ahead of his main rival Roglič, who is eighth overall. They both finished in the main pack and did not take time off each other. Roglič was the Tour runner-up in 2020 and has won the past three Spanish Vueltas.

After the peloton crossed the immense Great Belt suspension bridge, several riders fell near the back of the pack with two kilometres left to the finish in Nyborg.

Van Aert seemed set to win after overtaking Danish hope Mads Pedersen, but Jakobsen surged past him with a great burst of speed. Pedersen finished third.

After his surprise win, Lampaert wore yellow as riders set off on the 202 kilometres from the port city of Roskilde to Nyborg in central Denmark.

The start was slightly delayed after Tim Wellens punctured and Simon Yates had mechanical issues.

Huge crowds packed the roadsides as the red-and-white wave of Danish enthusiasm continued.

Bright sunshine added to the feel-good factor, although at times fans got too close to the pack as Cort and Bystrøm pulled away from the French at the front.

"I can't believe how many people were on the sides of the road cheering me on," said Cort, who has the polka-dot jersey for best climber after taking three bonus points along the route's three minor climbs. "I was impressed by this fervour. Cycling is a big part of Danish culture, everyone here had a bike growing up."

Cort faded entering the last 40 kilometres as Bystrøm was alone in front, while Roglič and Pogačar were near each other in the peloton some 30 seconds behind.

Meanwhile, Dutchman Martijn Tusveld, Austrian Patrick Konrad and Latvian Krists Neilands were involved in the day's first crash. Neilands crouched over his bike in pain and appeared to have an elbow injury.

With no one to help him, Bystrøm was caught with 30 kilometres left. Then, Cort was among riders who crashed approaching the bridge and Lampaert tumbled when he was on it. He got back up and worked hard to reach the peloton.

Stage 3 on Sunday is again for sprinters. It starts from Vejle on the Jutland Peninsula and ends in Sonderborg in southern Denmark after 182 kilometres of flats.

After a travel day, riders resume in France on Tuesday and tackle five small climbs on the route from the coastal city of Dunkerque to Calais.

The race ends on July 24 in Paris.