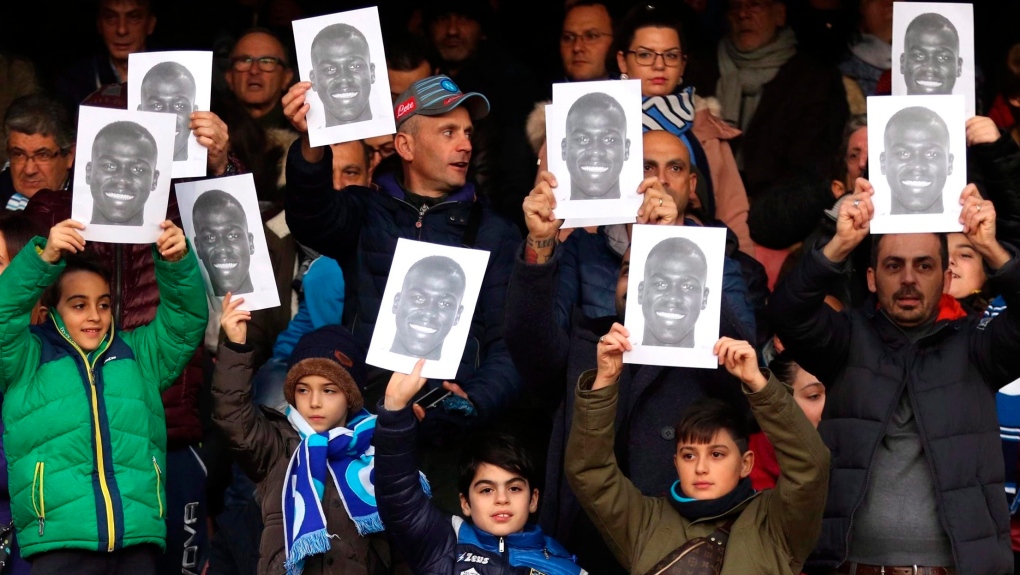 Fans hold up photos of Koulibaly during the Italian Serie A soccer match between Napoli and Bologna at the San Paolo stadium in Naples, Italy, Saturday, Dec. 29, 2018. 2018. Napoli fans and players are showing their support for defender Kalidou Koulibaly after he was subjected to racist chants during a match against Inter Milan on Wednesday at the San Siro Stadium. (Cesare Abbate/ANSA via AP)

ROME -- After weeks of silence, Italian soccer leaders are finally starting to confront the growing problem of racism inside the country's stadiums -- although not without another insulting gaffe by one official.

Whereas clubs previously faced having portions of their stadiums closed for racist chants, now the teams can avoid such punishment if they name the offending fans and hand over their identities -- or at least demonstrate that they did everything in their power to co-operate with investigating authorities.

"The responsibility is no longer objective but rather it becomes personal," Gravina said. "If a club now adopts and fully applies our model it no longer has anything to fear."

The move comes in response to a recent police crackdown on Juventus "ultra" fans linked to alleged infiltration by the Calabrian 'Ndrangheta crime mob. The investigation exposed that militant-like supporters allegedly blackmailed their own team by threatening racist chants which would result in a costly stadium closure if the club did not provide them with extra tickets for resale.

The federation's new anti-racism measures also require clubs to report high-risk matches to authorities ahead of time, establish and enforce a code of ethics, adopt a disciplinary system and create an external watchdog group to oversee enforcement.

"However, if some clubs don't want to share the names of those responsible then (the responsibility) goes back to being objective and they can still be punished," Gravina added.

Lotito said that jeers are not always "a discriminatory or racist act."

"I remember when I was young, often they would chant `boo' not at colored people but at people who had normal, white skin to discourage them from scoring," Lotito added.

A day later, Lazio issued a statement acknowledging that Lotito had used "an inappropriate term," but added that his words were "manipulated."

Lotito's outburst came after three black players -- Inter Milan's Romelu Lukaku , AC Milan's Franck Kessie , and Fiorentina's Dalbert Henrique -- were targeted by racist chants in the opening four rounds of Serie A. No sanctions were handed out by the Italian league, federation or police for the chants.

However, Brescia was recently given a suspended sentence of a partial stadium closure after its fans shouted "zingaro" -- or "Gypsy" -- at Juventus midfielder Miralem Pjanic, a Bosnia international who is white.

Last month, Italian soccer officials were lambasted by FIFA president Gianni Infantino for "hiding the truth" about racism and failing to do enough to combat the problem.

And last week, Italian players' association president Damiano Tommasi told The Associated Press that part of the problem was that soccer in the country leaders "don't all view the problem in the same manner."

The visit came two years after Lazio fans littered the Stadio Olimpico with superimposed images of Anne Frank -- the young diarist who died in the Holocaust -- wearing a jersey of city rival Roma.

"Eradicating every form of intolerance from soccer and our society is a common goal," Gravina said of his meeting with Dureghello

Added Dureghello: "Gravina's visit is an important sign of attention by the soccer world toward the issues that are dear to us."

And Serie A recently announced that it is working on an anti-discrimination project with player representatives from all 20 clubs that will involve police "and a big international partner."

"We are doing the utmost," Serie A CEO Luigi De Siervo said, "so that soccer can once and for all free itself of these problems."