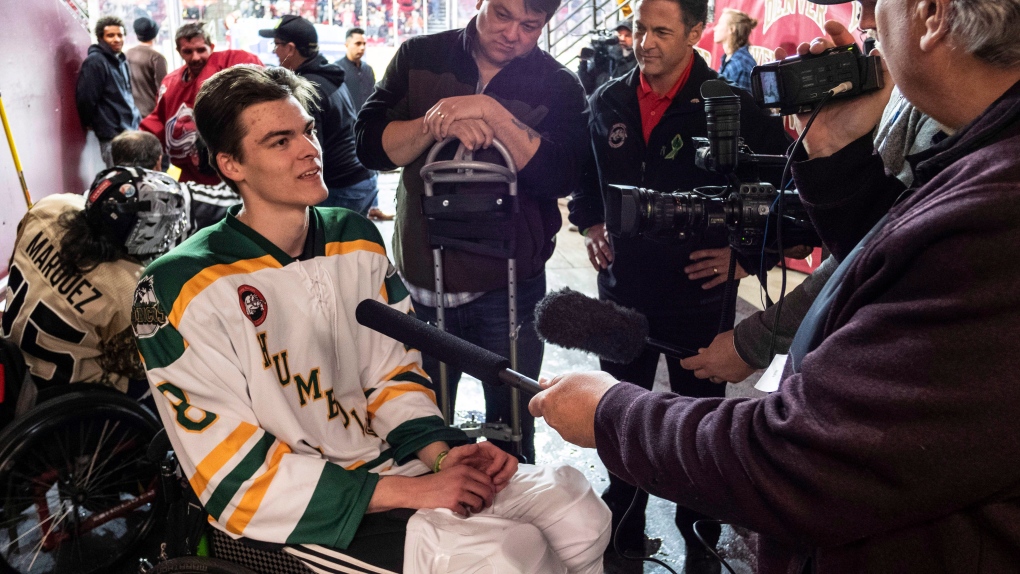 DENVER -- Jacob Wassermann says there have been some unexpected side effects following months of physio after being paralyzed from the navel down in the Humboldt Broncos bus crash.

Wassermann, 18, has been hard at work since coming out of an induced coma following the April 6 accident north of Tisdale, Sask., which claimed 16 lives and injured 13 others.

"The hardest part would be when I get a new muscle starting to work and then to get it strong again. Because when you first feel it you're like super excited but you can't do anything with it because it's so weak," he told The Canadian Press during an interview in Denver.

"It's a grind but I mean it's worth it getting results. I'm excited to see where I can take it. Obviously the goal is to try and walk again but it is way, way down the road, if at all possible, so I'm just doing my best."

Wassermann and Ryan Straschnitzki, one of his Broncos teammates who was also paralyzed in the crash, played in an exhibition sledge hockey game Friday at the University of Denver, where they received a standing ovation.

If Wassermann decides to pursue playing sledge hockey he will remain a goaltender. At six feet six inches, he would literally fill the net. But he said at this point it's an "if."

"I'm still feeling out and seeing where things are going. If hockey is the sport that I pick -- I'm still trying out a whole, wide variety of sports -- and if hockey is the one I pick then, yes, I want to be playing at the highest level possible," he said.

"I'm pretty decided that I want to be a goalie. I miss being in net."

Kirby Wassermann said his son, as an elite athlete, is finding it "frustrating" that results are so slow in coming. But he said on a positive note, he does know how to work hard.

"It's slow but they told us it would be slow. Spinal cord injuries take a lot of time," he said.

"Initially at the accident it was navel down, which is still where the injury is, but he's got movement in his hips and he's got a little bit in his glutes."

Wassermann expects Jacob, who started playing goal when he was nine, will choose to return to hockey.

"I think he'll get back to that at some form again too," he added.

The family lives on a rural property just outside of Humboldt. Wassermann said renovations are complete and Jacob has modified his own truck so he's able to drive.

"I think these boys, as well as others, that were involved in this are going to find a lot of ways in their life as they move on to inspire and help people."

But Wassermann said there have been some difficult moments since the accident and adapting to a new normal.

"You look back at pictures and it's only been last spring so we've been getting a lot of the jerseys hung up in Jacob's area and things like that, knowing the junior stuff is done with. But he's had a very positive attitude."