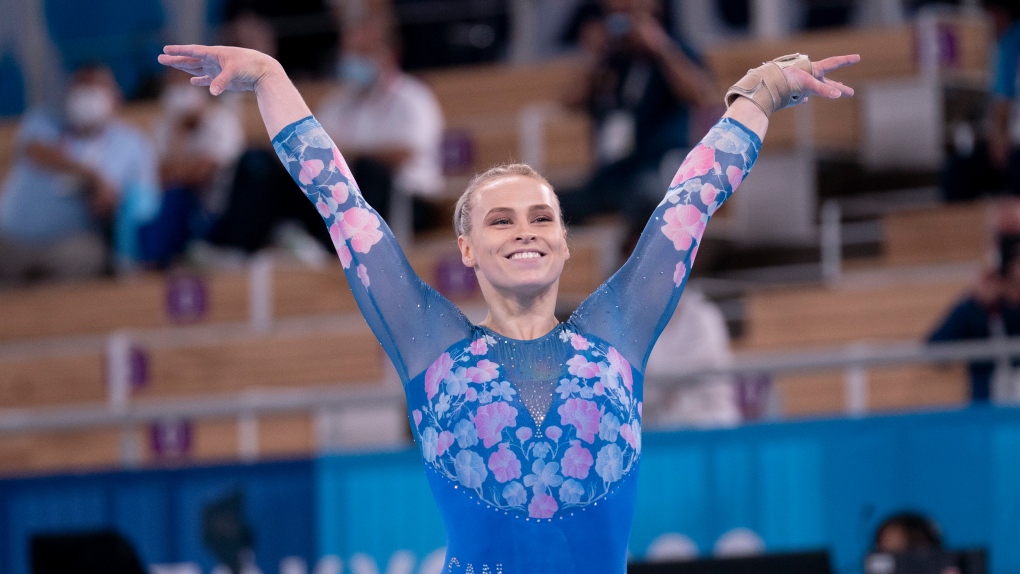 TOKYO --  A mixture of pride and disappointment enveloped Ellie Black after the Canadian gymnast finished fourth in the beam Tuesday at the Olympic Games.

Hampered by a sprained left ankle that knocked her out of the all-around, Black competed in a marquee beam final featuring American star Simone Biles, who took the bronze medal ahead of the Canadian.

Her ankle not up to the degree of difficulty she'd built into her beam routine, the 25-year-old from Halifax was nevertheless still in podium contention executing a modified version with a wrapped ankle.

She completed difficult elements with a few wobbles, but stuck her landing. She then hugged her coach David Kikuchi and wept.

"Obviously coming fourth is hard, but to be able to compete and take part in the final and hit my beam routine, I'm very, very happy with that," Black said later with emotion still shaking her voice at times.

"Not the beam routine I was expecting to compete, but still being able to take part and enjoy that opportunity and represent Canada as best as I possibly could under the circumstances, I was just really proud of myself."

Kyle Shewfelt was the first Canadian to win a medal of any colour in artistic gymnastics when he claimed men's floor exercise gold in 2004.

Black sprained her ankle in June and aggravated it dismounting from the beam in training a week before Tuesday's final.

She pulled out of the all-around and spent anxious days in physiotherapy, wondering if her Olympic Games were over. Black was conservative in warmup Tuesday, attempting no aerial elements.

After a couple back handsprings on the floor, Black stood at the edge of the mat and started at the apparatus while visualizing her routine.

Black's drama ran somewhat parallel to that of Biles, a triple gold medallist who withdrew during last week's team final when she was suddenly unable to orient herself in the air.

The American didn't attempt to defend her all-around title, nor did she compete in uneven bars, floor exercise and vault finals. Biles was cleared to compete in beam.

"My problem was why my body and my mind weren't in sync and that's what I couldn't wrap my head around," Biles said. "Where did the wires not connect?

"That was really hard. It was something that was so out of my control. The outcome that I had at the end of the day, my mental and physical health is better than any medal."

"She's been through so much," Black said. "It's important that she prioritize what she needs.

"I'm happy she had another chance on the floor kind of like me. Another opportunity to go out and show what we practice so hard to do even though it wasn't exactly what we planned."

Black was a silver medallist in the all-around at the 2017 world championships in Montreal after finishing fifth in the 2016 Olympic Games in Rio.

She tore ligaments in her right ankle at the 2019 world championship.

The COVID-19 pandemic pushing the Tokyo Games from 2020 to 2021 afforded Black more training time, but misfortune didn't allow her to fully express it in Tokyo.

"Training five years for this Olympics and for it to not go the way I wanted, it's heartbreaking in a sense because I didn't get to compete in the all-around final," Black said.

"I wasn't as prepared as I would have liked to have been for the beam final, but that being said, there's been so many great things over the past five years. Ending it like this is still a great thing for me. Fourth in the world is something very respectable."

With the 2024 Paris Games three years away instead of the usual quadrennial, Black isn't ruling out a fourth Olympic Games for her.

"I'm not ready to be done with gymnastics yet," she said. "I still have goals that I want."