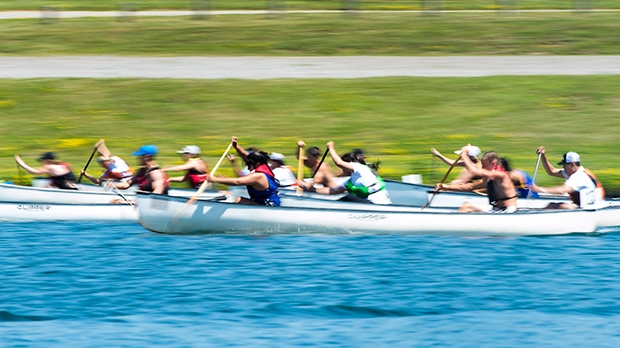 TORONTO -- Before hopping the overnight bus from Thunder Bay, Ont., to the North American Indigenous Games in Toronto, Lilly Kejick and Tyra King grabbed the green and blue flag from the high school flag pole in Pikangikum First Nation.

While the girls are members of Team Ontario, they wanted everyone at the Indigenous youth competition to know they are also proudly representing their community, a remote, fly-in reserve near the Ontario-Manitoba border. Kejick and King made sure Pikangikum's official flag was on display, parading it into York University's Aviva Centre during the opening ceremony last weekend.

"I've heard that they're really enjoying us representing our community," 17-year-old Kejick said when asked what her friends and family thought of her competing at this week's games.

Brandon Turtle, another athlete from Pikangikum, couldn't help but laugh when he saw that Kejick and King had brought the flag with them.

"It was awesome," said Turtle, 18, adding that the opening ceremony was impressive because he'd never seen so many Indigenous people in one place.

Kejick, King, Turtle and teammate Ray Strang are the only athletes from Pikangikum participating in the competition. Their involvement in the event has been a rallying point for the troubled Ojibwe reserve of some 2,300 people about 500 kilometres north of Thunder Bay.

Parts of Pikangikum have been under a boil-water advisory for more than a decade and, like many remote First Nations communities, it is struggling with the prevalence of suicide.

Even as competition began for the four teens on Tuesday, Health Canada was working with other departments and provincial ministries to bring in aid workers for hundreds of Pikangikum residents seeking help after two teenage girls died by suicide over the weekend. Four teenagers have taken their own lives in Pikangikum in the past two weeks.

But the preparation for the Indigenous Games has been a bright spot for the four athletes.

"I think it's really important because it's really empowering for them to see their coaches who've done one or two other NAIG events before and they know other people," said Vanessa Ip, a teacher at Pikangikum High School who is serving as a coach and chaperone at the games. "They can feel like they're part of a broader community that way. Especially for our kids at Pikangikum, because for some of them it's their first time leaving a small community and visiting a big city."

Ip also volunteers with Project Journey, a program established by the local Ontario Provincial Police detachment in 2014 to engage youth in extra-curricular activities like arts and sports with an emphasis on traditional teachings. The goal is to instil a sense of pride in the teenagers' heritage and undo some of the systemic racism of the residential school system.

It was through Project Journey that Kejick was introduced to competitive canoeing instead of just paddling as a leisure activity, although she still enjoys the peace of going out on Pikangikum Lake.

"I like being on the water, not really caring about others around me, just surrounding myself with nature and being myself," said Kejick, who trains on a rowing machine in winter and then on the reserve's lake during the summer.

It was also through Project Journey that Kejick learned about NAIG.

"When I was up in Pik and some other communities up around there, I realized that a lot of kids didn't have a clue what NAIG was, which I thought was shocking," said Keir Johnston, head coach of Ontario's canoe and kayak team and a former NAIG participant. "That's really what it's for, for them to have a chance to compete against other people and getting out of their community.

"There's tons of great athletes up there, so giving them a chance to challenge themselves and compete against people outside their community is important."

In February, Johnston worked with leaders in Pikangikum to host its first powwow in 16 years with more than 130 youths from nine First Nation communities attending. At the same time, they held tryouts in badminton, volleyball, rifle shooting, canoeing and kayaking.

For her part, Kejick was pleased to see so many people dancing and having fun in her community.

"It was nice seeing everyone get together and just enjoy themselves," said Kejick, who had attended powwows in Eagle Lake First Nation and Thunder Bay before. "It felt nice."