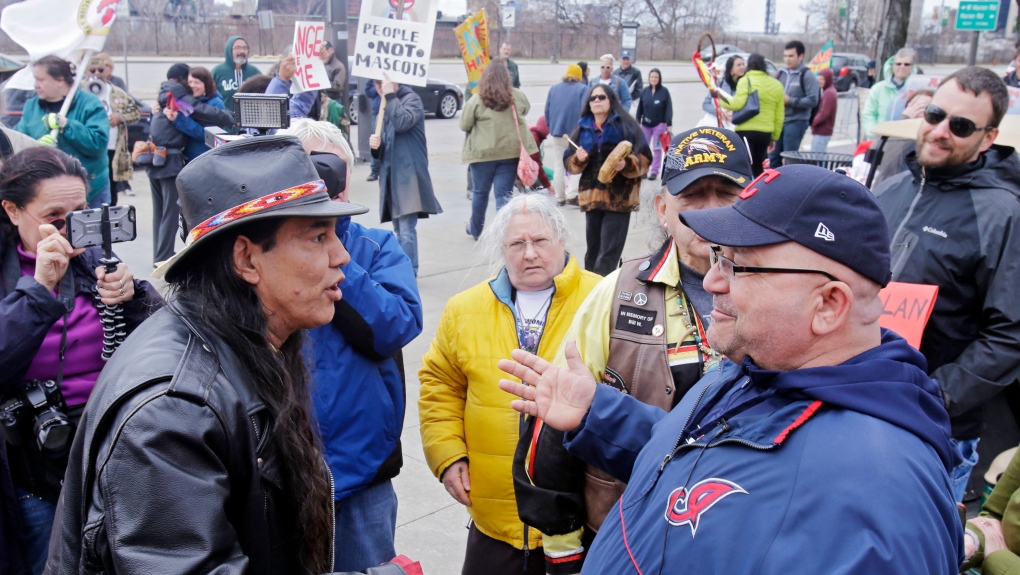 In this April 10, 2015, file photo, Philip Yenyo, left, executive director of the American Indians Movement for Ohio, talks with a Cleveland Indians fan before a baseball game against the Detroit Tigers, in Cleveland. (AP Photo/Mark Duncan, File)

CLEVELAND -- The spotlight for change is shining on the Cleveland Indians.

Now that the NFL's Washington Redskins have retired their contentious nickname and logo after decades of objection and amid a nationwide movement calling for racial justice, the Indians appear to be the next major sports franchise that might assume a new identity.

Along with the Indians, who recently announced they are in the early stages of evaluating a name change for the first time in 105 years, the Atlanta Braves, Chicago Blackhawks and Super Bowl champion Kansas City Chiefs are among those facing backlash along with the potential of sponsors pulling their financial support.

For some, the time has come for widespread changes to sports nicknames, mascots and symbols as the country reckons with its legacy of racism.

"I understand people aren't willing to change or so quickly, or they're hoping this moment is going to pass. It's not," said activist Frances Danger, who is Muscogee (Creek) and Seminole from Oklahoma. "And now that we've gotten what we needed on the Redskins side, we're going to start working on the rest of them. We're not going to let up."

On Monday, Washington announced it was dropping a nickname that had been in place since 1933 and had grown into an embarrassing scar for the NFL franchise. The team buckled under financial pressure from sponsors including FedEx, the shipping giant and naming rights holder to the teams's stadium, as well as other groups.

"I'm glad to see that they're acting on it," he said Monday night. "Also, I think that it was probably financially driven. ... You can't always do things when the timing is right, when it's convenient. That's kind of how I feel about this. I hope that our organization will lead as opposed to follow."

While the debate over the Redskins' nickname was waged for years, the drastic change came just two weeks after owner Dan Snyder, who once said he would never change the team's moniker, said the franchise would undergo a "thorough review" before its next move.

Cleveland's situation is different from Washington's on several fronts.

First, the Indians are not feeling heat from any corporate sponsors. At least not publicly.

When the Redskins announced their review earlier this month, the Indians released a statement within hours of Washington's that said, "we are committed to engaging our community and appropriate stakeholders to determine the best path forward with regard to our team name."

The Indians didn't promise to change their nickname. But it would be hard to imagine them going through a detailed evaluation and deciding to stick with a nickname that Native American groups have condemned for years as degrading and racist.

Cleveland showed a willingness to rebrand itself when it pulled the highly debated Chief Wahoo logo off its game jerseys and caps. While the red-faced, toothy caricature remains a presence on some team merchandise, its reduced status and removal from the diamond and signage around Progressive Field was applauded as a positive step.

Even if the Indians decide to drop the nickname, there are numerous other layers -- trademark contracts, new logos, Major League Baseball's approval -- to work through before the change could take effect.

While the Indians seem open to a new identity, the Braves aren't budging.

They have no plans to change their nickname, telling season-ticket holders in a letter last week that "we will always be the Atlanta Braves." However, the team said it will review the team's "tomahawk chop" chant -- a tradition borrowed in the early 1990s from Florida State's powerful football program.

The Blackhawks, too, have no plans for change, saying their name honours a Native American leader, Black Hawk of Illinois' Sac & Fox Nation. The NHL team said it plans to work harder to raise awareness of Black Hawk and "the important contributions of all Native American people."

Part of Atlanta's insistence to keep a nickname the franchise brought from Milwaukee in 1966 is due to the the team's "cultural working relationship" with the Eastern Band of Cherokee Indians in North Carolina and other tribal leaders it collaborates with regularly.

But as teams look to make changes, Danger and other activists will continue to push them to abandon any connection with Native Americans, who have been portrayed as mascots for generations.

"We're being paraded around without a say in how we're seen," she said. "It's a less bloody continuation of that, of us being a sideshow. It's not hard to choose the right side of history, so I hope these teams will take that step with us, side by side, as we all work together to change the world."