In wake of Cleveland's decision, Blackhawks stay with team name 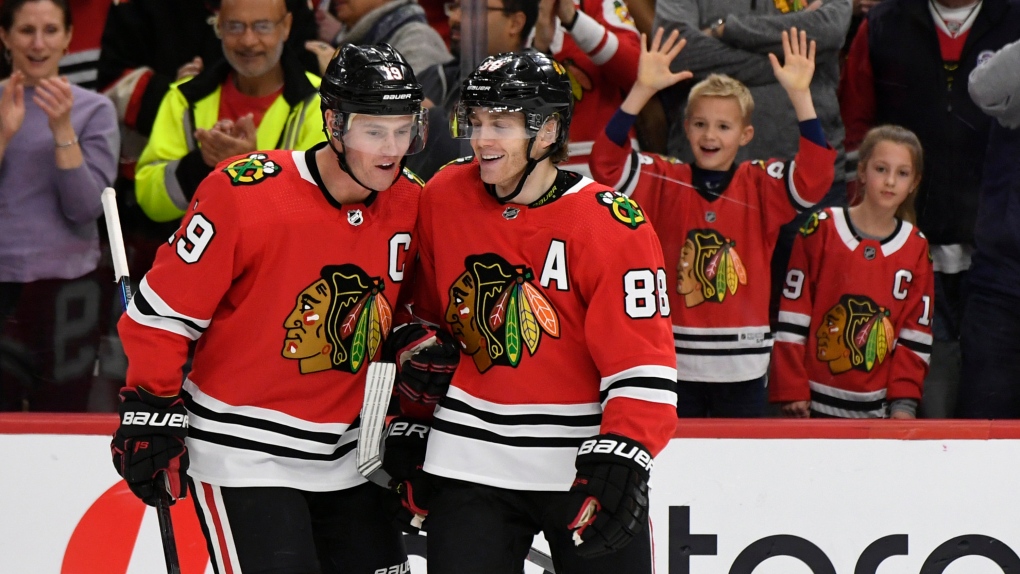 Chicago Blackhawks' Patrick Kane (88) celebrates with teammate Jonathan Toews (19) after scoring a hat trick during the third period of an NHL hockey game against the Minnesota Wild in Chicago, in this Sunday, Dec. 15, 2019, file photo. (AP Photo/Paul Beaty, File)

CHICAGO -- The Chicago Blackhawks are going to remain the Blackhawks and there is no sign of a change coming anytime soon.

Speaking publicly for the first time since baseball's Cleveland Indians announced Monday they plan to change their name, Blackhawks CEO Danny Wirtz reiterated the same message the team shared this summer after lingering questions about Native American team names returned to the forefront.

"Obviously respect the decision the Cleveland Indians made to go down that path, but we continue to deepen our commitment to upholding our namesake and our brand," Wirtz said Thursday.

In July, after Washington's NFL team announced it was reviewing its name, the Blackhawks said they planned to continue with their name because it honours Black Hawk, a Native American leader from Illinois' Sac & Fox Nation. Washington ended up dropping the "Redskins" name, logo and all Native American imagery. The Indians announced their decision this week, while the NFL's Kansas City Chiefs and baseball's Atlanta Braves have said they have no plans to change their name.

The Blackhawks also said this summer they are committed "to raising the bar even higher" when it comes to expanding awareness of Black Hawk and all Native American people -- and Wirtz, the son of Blackhawks owner Rocky Wirtz, made it sound as if that effort had only reinforced what the franchise felt about its name. The team announced later in July that they were banning headdresses at home games as part of their pledge to honour the Native American community.

"The work we've been doing over the last several months in expanding and deepening conversations and partnerships within the native community, we continue to feel really positive about the types of work we can do," Danny Wirtz said, "the way in which we can be better stewards of the namesake and the history, and to use our platforms to be educators, not only for our fans, but for our internal teams and making sure that we provide that reverence and respect that we talk about."

Danny Wirtz, 43, made his remarks a day after the Blackhawks shuffled their front office. Wirtz was named chief executive officer after serving as interim president following the firing of John McDonough in April. General manager Stan Bowman was elevated to president of hockey operations, and Jaime Faulkner was hired as president of business operations.

Faulkner was the CEO of E15, a consulting strategy and analytics company that she helped create in 2013. At E15, she worked with more than 200 clients, including some pro sports teams, to develop systems predicting fan behaviour. Her husband, Colin, is the executive vice-president of sales and marketing for the Chicago Cubs.

Faulkner joins a small but growing number of female executives with major sports teams. While discussing her excitement about her new role, she paid tribute to Valerie Camillo of the Philadelphia Flyers and Gillian Zucker of the NBA's Los Angeles Clippers, two women serving as the president of business operations with their franchises.