'I was bawling': Injured Bronco's mother stunned by his progress after surgery 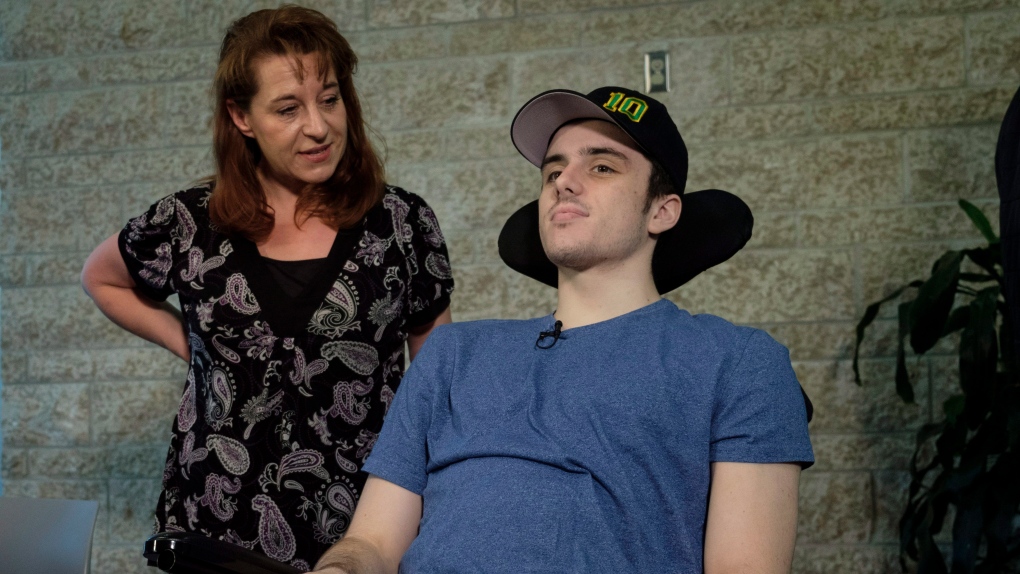 Humboldt Broncos hockey player Ryan Straschnitzki, who was paralyzed following a bus crash that killed 16 people, speaks to the media as his mother Michelle, looks on in Calgary, Alta., Wednesday, April 25, 2018. (THE CANADIAN PRESS/Jeff McIntosh)

The mother of a hockey player paralyzed in the Humboldt Broncos bus crash says she's stunned by the progress he has made since receiving spinal surgery in Thailand.

Doctors implanted an epidural stimulator in Ryan Straschnitzki's spine earlier this month and a week later injected stem cells above and below the injury in the hope that will help reverse some of the damage.

The 20-year-old from Airdrie, Alta., is to remain in Thailand until early December.

"Hands down I'm 200 per cent behind this. I didn't expect this kind of result this quickly," Michelle Straschnitzki said in an interview. "It's definitely not a quick fix. It's not a cure, but it's certainly progress and it's more than we've had in 19 months."

Tom Straschnitzki, who is also in Thailand, has posted a number of videos of his son's rehab, including one where the young man was able to move a leg. Another video shows him strapped into a harness as physiotherapists slowly help him walk with the use of a machine on wheels.

"Bout time he got off his ass. 1st time since he boarded the bus that horrendous day," Straschnitzki tweeted.

"Therapist helping with knees and ankles so they don't buckle. Ryan did so good, I sent him to the beer store for me."

Straschnitzki was one of 13 players who were injured when an inexperienced truck driver blew through a stop sign and into the path of the Saskatchewan junior hockey team's bus in April 2018. Sixteen others on the bus died.

Straschnitzki, who was paralyzed from the chest down, has said he isn't expecting a cure but hopes the implant will restore some muscle movement and things such as bladder control.

A small device like a remote control is to send electrical currents to his spinal cord to try to stimulate nerves and move limbs. The implant is being programmed to stimulate certain nerves mapped out by surgeons and therapists.

The surgery can cost up to $100,000 and isn't covered by public health care or insurance, because the epidural procedure has not been approved by Health Canada. The family is paying for it themselves. It is also performed in countries such as the United States and Switzerland, but it is much cheaper in Thailand.

The player's mother, who didn't go to Thailand, said he's been low key when she's talked to him.

"In typical Ryan fashion he's very quiet. All he says is he's very tired and you can tell. His body, his mind, everything is tired because he's pushing as far as he can."

Her son takes part in nerve mapping in the morning, does physio in the afternoon and then does more work with the implant, she said. He still plans to hit the ice in Bangkok with his hockey sledge before returning home.

Straschnitzki said seeing her boy's progress on the videos stunned her.

"I was just absolutely floored. It obviously brought the tears. I was bawling. It was unreal," she said.

"Tom said the last time Ryan walked was when he walked on the bus and then, to watch him moving his legs, walking essentially, that just rocked me."