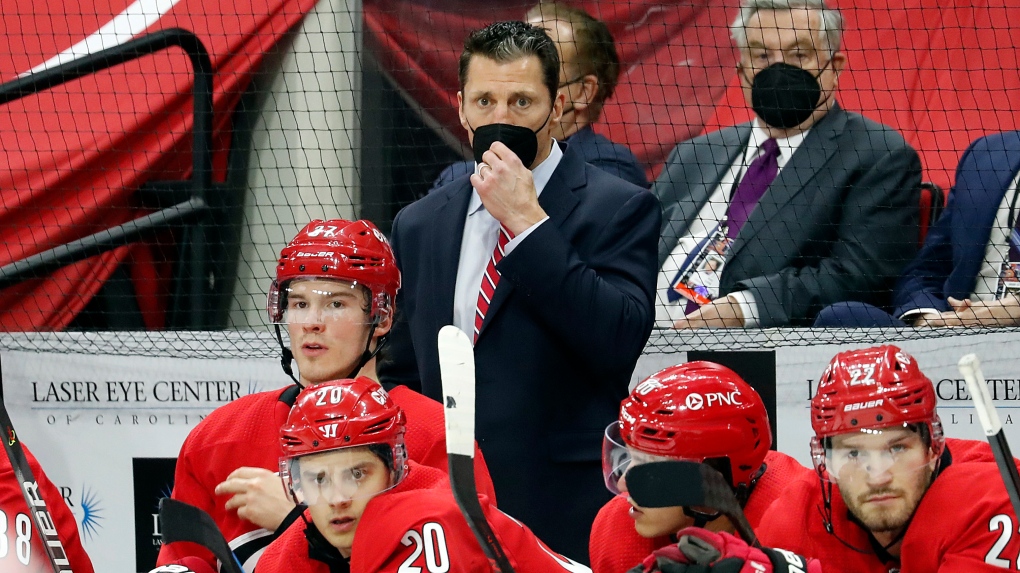 Rod Brind'Amour never worried much about being able to reach a deal to remain coach of the Carolina Hurricanes.

"It was just a matter of time, really," Brind'Amour said Thursday as the team announced a three-year contract extension.

Hours later, Brind'Amour won the Jack Adams Award as NHL coach of the year for guiding the Hurricanes to a third consecutive playoff appearance and finishing first in the Central Division. The extension and accolades come a little over a week since Carolina was

eliminated by reigning Stanley Cup champion Tampa Bay in the second round.

The 50-year-old Brind'Amour's previous contract ran through this season, though the captain of Carolina's 2006 Cup winner and owner Tom Dundon had made public comments in recent months indicating they expected to reach an agreement -- with Brind'Amour saying in early May: "Everybody knows I'm a Hurricane."

"Don and I talked throughout the year, occasionally," Brind'Amour said. "I thought we were on the same page. ... He knew I wanted to be a part of this. I knew he wanted me to be a part of it, too. So we figured it out."

Now he'll remain with the franchise where he also played in the 2002 Stanley Cup finals and worked as an assistant coach before guiding a resurgence from a nine-season playoff drought.

"I would have a hard time thinking I could do the same job I'm doing here somewhere else because this is a part of me," Brind'Amour said. "This place, I've been here forever. Again, it's more about the people that I get to come to work with everyday. That wouldn't be the case somewhere else. It just wouldn't be."

While an agreement was expected, Brind'Amour said it took time to make sure he has "the right people around me" before reaching a deal. Brind'Amour pointed to support staff ranging assistant coaches to training staff and equipment people.

"That's why I think part of it took so long is a lot of people, we had to figure out," he said. "We're at that point where we've pretty much done that."

Waddell described the negotiation as "on the easy side" because of the long-standing relationship.

"We talked early on that it was important to get the whole group done," Waddell said.

Brind'Amour, who took over in 2018, took his first team to the playoffs and beat reigning Stanley Cup champion Washington on the way to the Eastern Conference finals. Then came a trip to the Toronto bubble last summer and a qualifying series win in a second straight playoff appearance.

This year marked the first time the franchise had made three straight playoff trips since relocating to North Carolina in 1997 from Hartford, Connecticut. The Hurricanes won the Central Division title for the team's first division crown since winning the Stanley Cup in 2006, and remained in the hunt for the Presidents' Trophy for best regular-season record to the final week of the schedule.

Carolina beat Nashville in a six-game first-round series before falling in five games to the Lightning in Round 2. And much of Carolina's core is under contract, including star center Sebastian Aho and top defenseman Jaccob Slavin.

Brind'Amour is 120-66-20 in the regular season over three seasons and 17-17 in the playoffs. He's a Jack Adams winner for the first time.

Florida's Joel Quenneville and Minnesota's Dean Evason were the other coach of the year finalists.