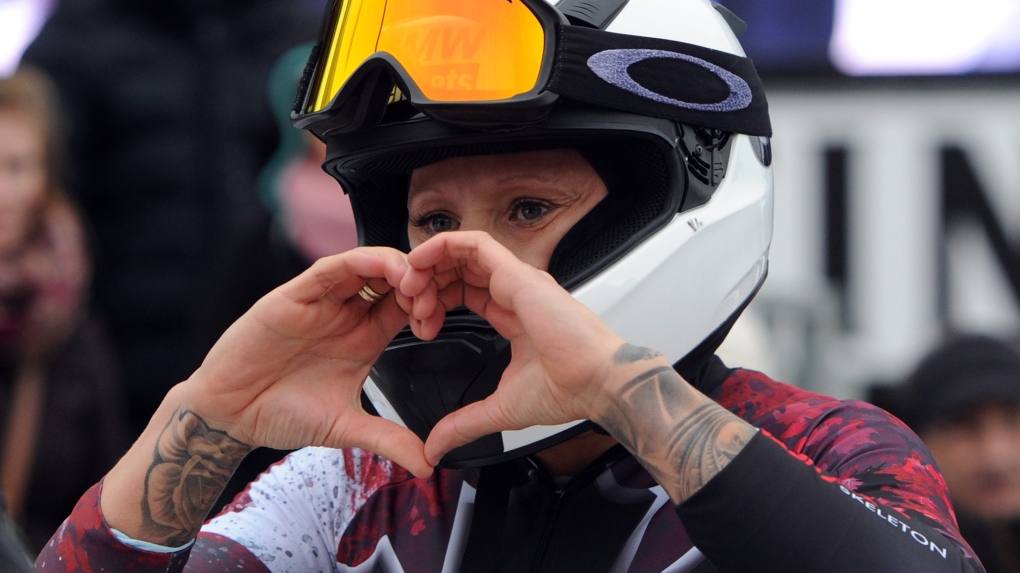 Kaillie Humphries of Canada makes a heart shape with her hands as she celebrates the third place during the women's competition of the two-man bobsled World Cup in Winterberg, Germany on Dec, 5, 2015. (Caroline Seidel / dpa via AP)

CALGARY -- Olympic bobsled champion Kaillie Humphries says she won't race for Canada as long as the country's sport governing body is run by its current management.

Humphries wants Bobsleigh Canada Skeleton to release her to compete for the United States. She forced the issue this week by filing a court injunction against the Canadian organization, but a judge did not rule in her favour.

BCS high-performance director Chris Le Bihan has said he wants her back on the national team. Humphries isn't buying it.

"I will not be returning to Bobsleigh Canada Skeleton with the administration as it exists at this point," Humphries told The Canadian Press in an email Wednesday.

"It's been made very clear I am not wanted by them, and I do not feel safe psychologically and physically."

BCS would not comment Wednesday. A spokesman said Le Bihan made the organization's position clear Tuesday when a judge shot down Humphries' request for an injunction.

"We believe we have a safe and a high-performing training environment for all athletes," Le Bihan said at the courthouse.

"We want Kaillie in our program. Kaillie is obviously going to be a threat in the next Olympics and there's nothing more that we like to see other than Canadians standing on the podium."

Humphries and brakewoman Heather Moyse became the first to repeat as Olympic women's bobsled champions in 2010 and 2014.

The duo carried Canada's flag at the closing ceremonies of the 2014 Winter Games.

But after 15 years under the BCS umbrella, Humphries wants out because of what she feels is mishandling of a harassment complaint she filed over a year ago and punishment from her own organization for filing that complaint.

None of her claims have been proven in court and BCS has not yet filed a statement of defence.

Humphries says she needs both a letter of release from BCS and a letter of acceptance from USA Bobsled by Sept. 30 in order to race in the 2019-20 season.

Under International Bobsleigh and Skeleton Federation's criteria, one of the conditions for switching countries is "they must have changed their citizenship or their official residence, and have been released by their former Member and accepted by their new Member."

Humphries married an American on Saturday and has moved to the U.S.

USA Bobsled invited her to its push trials starting Thursday in Lake Placid, N.Y., but it is unclear if Humphries can participate without a release from BCS.

Her longtime American rival Elana Meyers Taylor, who would be Humphries' teammate, said Wednesday she's taking the season off to have a child.