TORONTO -- Johnny Bower didn't really want to come to Toronto. But the pint-sized goalie with the big heart went on to become part of Maple Leafs lore.

Bower, a two-time Vezina Trophy winner who helped the Leafs win their last Stanley Cup championship in 1967, died on Tuesday. A statement from his family said the 93-year-old died after a short battle with pneumonia.

Bower, who became known as the China Wall, was happily playing in the minors in Cleveland when he was picked up by Toronto almost 60 years ago. He said he only showed up to avoid being suspended for not reporting.

"They just wanted me for one year but I had a good team in front of me," Bower recalled with a laugh in a November 2014 interview. "I was there for 13 years, so it turned out really nice for me."

Years after retiring, Bower remained one of the most beloved ex-Leafs.

"I don't know what it is," he said of his popularity.

But Bower, whose age seemed flexible during a long hockey career that took a long while to come to a boil, always had time for his fans.

"I can't say no to these kids. Because when I was a child during Depression time we had nothing at all. Like my dad said it costs you nothing for a smile. Just go ahead and work and do your job and be good to people and they'll be good to you."

Toronto honoured Bower on the occasion of his 90th birthday on Nov. 8, 2014, during a game against the New York Rangers, his first team. He was given a framed, autographed crest from each team and an enthusiastic rendition of "Happy Birthday" from the sellout crowd.

"There may not be a more loved Toronto Maple Leaf nor a former player who loved them as much back," Maple Leafs president and alternate governor Brendan Shanahan said in a statement.

Bower's career took off after the Leafs claimed him in a 1958 intra-league draft. Bower went on to play 475 regular-season games and win four Stanley Cups for the Leafs, plying his trade mostly without a mask.

"I got a couple hundred stitches in the face," the fearless goaltender recalled during a 2005 interview. "You learn how to duck."

Just five foot nine, Bower was named to the NHL's first all-star team in 1961 and won the Vezina Trophy as best goalie that year, too.

He pioneered the poke-check, diving head first at opposing players to knock the puck off their sticks. The move came with a cost -- he suffered cuts and lost teeth by throwing himself into the action.

But he stopped pucks. And he got better with age -- despite painful bouts with arthritis and eventually learning he was near-sighted.

He usually wore a mask for practices but didn't use one in games until his second-last NHL season, 1968-69. That spring, he became the oldest goaltender to appear in a Stanley Cup playoff game at 44 years four months and 28 days.

"He was an inspiration to us," said George Armstrong, who captained the Leafs' last championship team. "He shamed others into hard work.

"John gave everything he could during workouts and we weren't going to let that old guy show us up."

After retiring, he served as a scout and goalie coach for the Leafs.

He was the only boy among nine children in a rural Saskatchewan family by the name of Kiszkan. He loved hockey and decided he wanted to be a goalie. He made leg pads from an old mattress, and he was on his way.

But there was a momentous detour: in 1940 at age 16 he lied about his age so he could enlist in the army and do his bit in the Second World War. He told authorities his birth certificate had burned in a fire.

After training in Vernon, B.C., he was stationed in England but did not see action due to arthritis.

"It's a good thing I didn't because the Germans were right there waiting," he said. "A lot of guys there were killed on the beaches. I know four or five good hockey players from Prince Albert who were killed. They never came back."

Upon his return, he played junior hockey with his home-town Prince Albert Black Hawks.

Turning pro with the Cleveland Barons in 1945, he changed his name to Bower because he felt Kiszkan was too difficult to pronounce. He played eight seasons in the AHL before getting a chance in the NHL, earning league MVP honours three times.

Bower played all 70 games for the New York Rangers in 1953-54, but the team chose to go with Gump Worsley the next year and Bower was back in the minors for most of the next four years.

He played 64 games for the AHL Cleveland Barons in 1957-58 before being picked up by Toronto.

"I didn't even want to come to Toronto, to be honest with you because I was 35 years of age at that particular time and I didn't know I could help them," he said, further muddying the waters when it comes to his age. "I had the experience, mind you. But I was happy in Cleveland, I enjoyed myself there and had a good job. When they picked me up, I didn't want to go. And Mr. Hendy (Cleveland GM James Hendy) said at that time if you don't go, they'll suspend you."

Bower agreed to go when Hendy said he would have a job waiting for him if it didn't work out in Toronto.

Bower went on to become a blue-and-white fixture. He finally retired after playing one game in the 1970-71 season -- four months past his 45th birthday.

He played 552 regular-season NHL games with 250 wins, 195 losses and 90 ties. He posted 37 regular-season shutouts and had a goals-against average of 2.52. Combining his AHL and NHL appearances, he was in a total of 1,207 regular-season games -- a record no goalie will come close to.

"There is so much to appreciate in Johnny Bower's accomplishments on the ice -- including the four Stanley Cups and membership in the Hockey Hall of Fame -- and yet there was so much more to the man who served his sport, his country, and his community with such distinction," said NHL commissioner Gary Bettman.

He almost made a comeback in 1980. With Leaf goalies Mike Palmateer and Paul Harrison sidelined by the flu and a question-mark over whether Vincent Tremblay could make it in time from the AHL, Bower signed a one-game contract as an emergency backup.

Tremblay made it on time, so Bower's services weren't needed.

Bower was always coy about his age and, when asked about it upon his retirement, he said, "If you don't know by now, you never will."

"Nobody ever, anywhere in sports, had more guts than Bower," said Imlach.

Bower was inducted into the Hockey Hall of Fame in 1976. Toronto paid tribute to him with a commemorative banner in 1995 that still flies high at the Air Canada Centre, and his old AHL team in Cleveland retired his No. 1 in 2002.

Like other Toronto fans, Bower was forced to endure the Leafs' long Cup drought.

"It hurts a little bit inside but I mean they're trying." he said in 2014. "They have a pretty good young club team right now going but it's going to take a time to develop.

"It's frustrating. At times there I don't watch the game if they're getting beat. But other times I watch it pretty closely. I keep an eye on the goalkeeper more than anybody else."

In his free time, Bower loved fishing at his cottage near Bobcaygeon, Ont. In his later years, he was involved in numerous charity causes and made appearances for the Leafs, always to warm applause.

It is with great sadness that the Bower family announces the passing of @MapleLeafs legend #JohnnyBower after a short battle with pneumonia. (Photo courtesy of the Toronto Star) pic.twitter.com/FHayp8xE1t 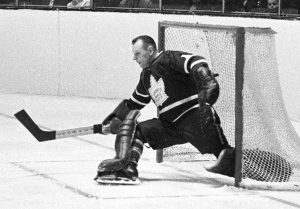