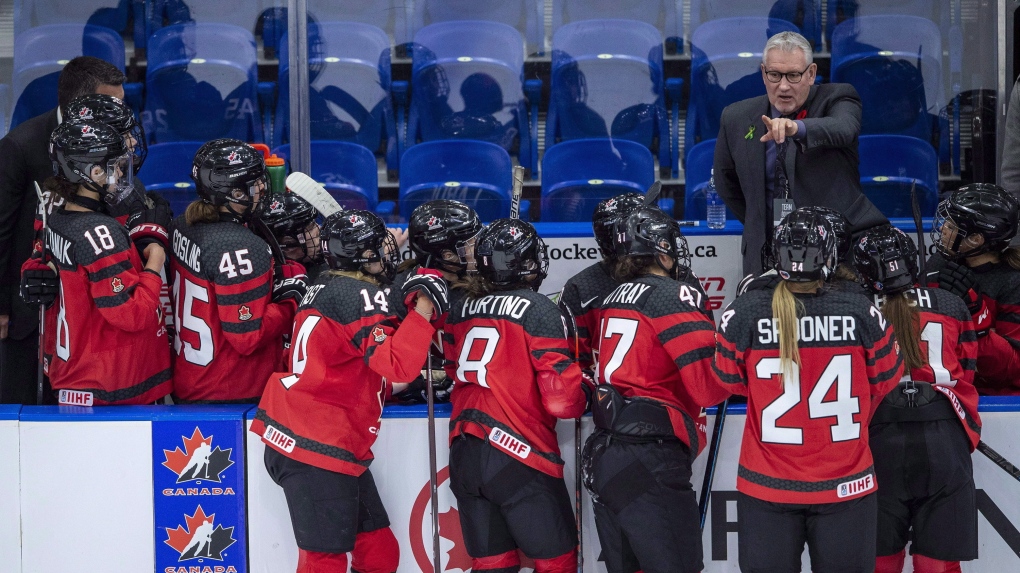 CALGARY -- Wanting to provide players with some certainty about the future after months without it, Hockey Canada named its roster of women invited to try out for the 2022 Olympic team.

Of the 28 announced Wednesday, 10 forwards, three defenders and one goaltender played on the 2018 Olympic team that lost the final to the United States in a shootout.

Defender Meaghan Mikkelson of St. Albert, Alta., and forwards Marie-Philip Poulin of Beauceville, Que., and Rebecca Johnston of Sudbury, Ont., are three-time Olympians having won gold in both 2010 and 2014.

The COVID-19 pandemic has limited Canada's national team to just five international games, all against the Americans, in the last two years.

The world championship in Nova Scotia was cancelled two years in a row. The 2021 tournament was abruptly called off last month on a day when international teams were to depart for Canada.

So three Canadian-team camps since January had an outsized influence over which women were invited to congregate in Calgary in late July to start preparations for Beijing.

Hockey Canada's Gina Kingsbury said she consulted with Canada's veteran players and decided the 47 players in the national-team pool, whether they were named to the centralization roster or not, needed to know their status.

"We leaned on our leadership group to advise us what the need of the group was," said the director of national women's teams. "It was pretty evident everyone was ready to move forward.

"It was time for us to make the decisions that we needed to make, to also give our athletes the opportunity to get organized and get their minds wrapped around moving to Calgary in a few months.

"For those athletes we're not moving on with, giving them that time and space to make decisions for themselves as well."

Kingsbury, who won gold with Poulin, Johnston and Mikkelson in 2010, didn't wait until after the Professional Women's Hockey Players' Association's Dream Gap Tour in Calgary later this month, even though many players in the national-team pool will be among 60 participating in the three-team tournament.

"I don't think the Gap Tour would have given us much more data," she said.

Canada's 2022 Olympic team will be experienced up front, but less so on the back end.

Desbiens posted an 18-save shutout in a 5-0 win over Russia in her lone start in Pyeongchang.

Mikkelson and 2018 alumni Jocelyne Larocque of Ste. Anne, Man., and Renata Fast of Burlington, Ont., were among nine blue-liners invited.

Defenders Erin Ambrose of Keswick, Ont., and Micah Zandee-Hart of Saanichton, B.C., were among the final cuts from the 2018 squad. They'll get another chance to make the Olympic team.

Defenders Laura Fortino and Lauriane Rougeau, who won Olympic gold in 2014, defender Brigette Lacquette, who won silver in 2018, and forward Loren Gabel, who had a breakout 2019 world championship, were among those who participated in last month's camp in Halifax, but not invited to Olympic tryouts.

"We really leaned on what we saw now," Kingsbury said. "If we felt there was a young athlete that possibly had a higher ceiling and we projected they would be at a better spot come February of 2022, that certainly played a role.

"It was a challenge. Would we have liked to have more games under our belt and more time to evaluate and make these decisions? Absolutely, but that wasn't what we were dealt."

A wrinkle to Canada's preparation is Hockey Canada still intends to host the women's championship Aug. 20-31 at a location yet to be named.

"We also want to be ready for worlds and we want to win worlds," Kingsbury said. "That's our number one objective and then we can focus on Beijing.