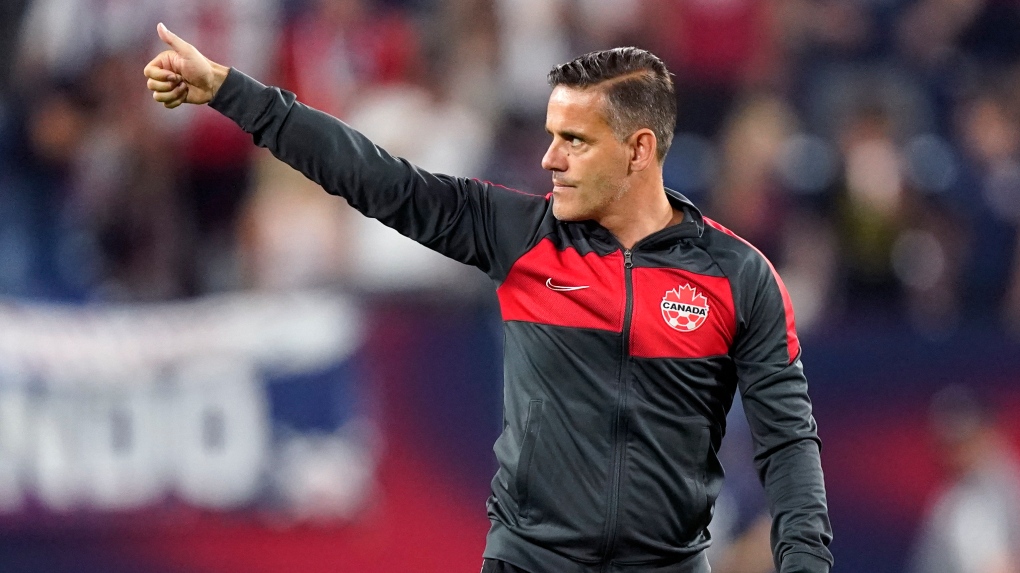 Canada head soccer coach John Herdman salutes the crowd as he leaves the pitch following a 1-1 draw against the United States in a World Cup soccer qualifier on Sept. 5, 2021, in Nashville, Tenn. (AP Photo/Mark Humphrey)

While some players were still in transit after weekend club matches, the Canadian men held their first practice Monday afternoon at Inter Miami's training ground in Fort Lauderdale.

They face a challenging schedule with three matches in three countries across seven days, starting Thursday in Honduras.

After taking on the 76th-ranked Hondurans, the 40th-ranked Canadian men host the 11th-ranked Americans on Sunday at Hamilton's Tim Hortons Field before flying to San Salvador to face No. 70 El Salvador on Feb. 2 at Estadio Cuscatlan.

The Hamilton game sold out within hours with a crowd of 24,000 initially expected. But recently implemented COVID-19-related restrictions mean attendance will be restricted to 12,000.

The 21-year-old from Edmonton, a star fullback for Bayern Munich who plays a more attacking role for the national team, has been sidelined by myocarditis, an inflammation of the heart muscle, after testing positive for COVID-19.

There has been some confusion over the status of influential midfielder Stephen Eustaquio, who is currently on the midst of a loan move in Portugal from FC Pacos de Ferreira to Porto. While Portuguese reports say Eustaquio tested positive for COVID-19, Canada Soccer included him on the roster and hopes he will still be able to join the national team for some of the international window.

Defender Scott Kennedy, who missed out on recent Canada games due to injury, returns to the roster.

Canada played to 1-1 ties with both Honduras and the U.S. -- in Toronto and Nashville, respectively -- in early September in its first two matches of the final round of CONCACAF qualifying.

Come March, the top three countries will book their ticket to Qatar 2022 with the fourth-place team facing a side from Oceania in an intercontinental playoff to see who joins them.

The Honduras game marks a return to the Estadio Olimpico Metropolitano in San Pedro Sula, where the Canadians' 2014 World Cup qualifying campaign ended in an 8-1 humiliation in October 2012.

Hutchinson, Borjan and forward Lucas Cavallini are the only members of the current squad who dressed that day.

Canada has played at the San Pedro Sula stadium once since then, losing 2-1 in September 2016 in a 2018 World Cup qualifier.