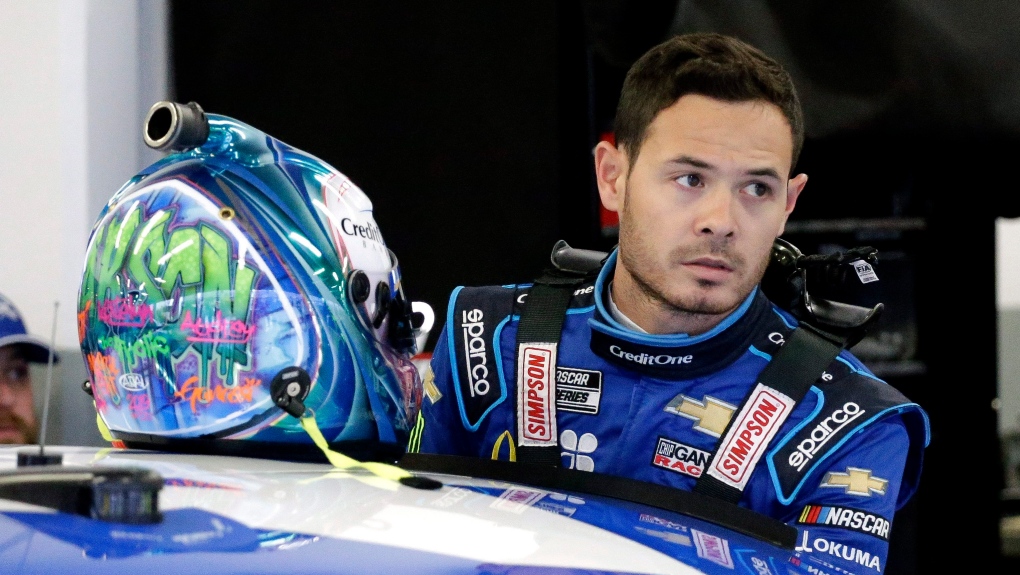 Kyle Larson gets ready to climb into his car to practice for the NASCAR Daytona 500 auto race at Daytona International Speedway, Friday, Feb. 14, 2020, in Daytona Beach, Fla. (AP Photo/Terry Renna)

CHARLOTTE, N.C. -- Kyle Larson will be back in NASCAR next season driving the flagship No. 5 Chevrolet for Hendrick Motorsports.

Larson signed a multi-year contract Wednesday with Hendrick that ended his seven-month banishment from NASCAR for using a racial slur while playing an online racing game last spring. He'd been considered the top pending free agent in the sport but was promptly fired by Chip Ganassi Racing and lost all his sponsors.

Since using the n-word on April 12, Larson has completed NASCAR's sensitivity training, hired an inclusion training coach, volunteered with the Tony Sanneh Foundation, visited Jackie Joyner-Kersee and her St. Louis community centre, and the site of the 2014 protests in Ferguson, Missouri, that followed a fatal police shooting of a Black man.

Larson has volunteered at food banks, went with Sanneh to the George Floyd Memorial site in Minneapolis, spent extensive time at the Urban Youth Racing School in Philadelphia and made numerous other visits to both educate himself on racial justice issues and speak of his own experiences.

Larson, who is half-Japanese, also kept racing under the radar: He has won 42 sprint car races in 2020 while suspended from NASCAR.

"Kyle is unquestionably one of the most talented race car drivers in the world," team owner Rick Hendrick said in a statement. "He has championship-level ability and will be a significant addition to our on-track program. More importantly, I have full confidence that he understands our expectations and will be a tremendous ambassador for our team, our partners and NASCAR."

Hendrick said he's had "many, many conversations" with Larson and is "confident about what's in his heart and his desire to be a champion in all aspects of his life and career. Kyle has done important work over the past six months, and Hendrick Motorsports is going to support those continued efforts."

Hendrick was expected to bid for Larson when his contract expired with Ganassi, who also wanted to keep the driver he'd groomed from sprint cars to NASCAR's top Cup level.

Instead, the 28-year-old's future in NASCAR was jeopardized by his use of the slur during an iRacing event late Easter Sunday. He was finally reinstated by NASCAR last week.

"Mr. Hendrick is one of the people who extended a hand to me over the past six months," Larson said in a statement. "Our initial conversations were not about racing. He cares about me as a person and wants to see me succeed beyond driving. I can't put into words how grateful I am for the commitment, the faith and the confidence from him and everyone at Hendrick Motorsports."

Hendrick will return the No. 5 -- the first car campaigned when Hendrick Motorsports launched in 1984 -- and discontinue use of the No. 88 it acquired for Dale Earnhardt Jr. in 2008. Geoff Bodine drove the No. 5 to three victories in the 1984 season that was almost Hendrick's first and last in NASCAR.

"The `5' is special to me. It's the original," Hendrick said. "I view it as Hendrick Motorsports' flagship team in a lot of ways. To bring the car back to the racetrack is meaningful for my family and for many of our team members and fans."

Larson will be part of a Hendrick lineup that includes Chase Elliott, William Byron and Alex Bowman. The average age of the lineup will be 26 years old at the opening of next season.

"I'm excited about our roster of young talent," Hendrick said. "We have a team that is built to win races and compete for championships for years to come."