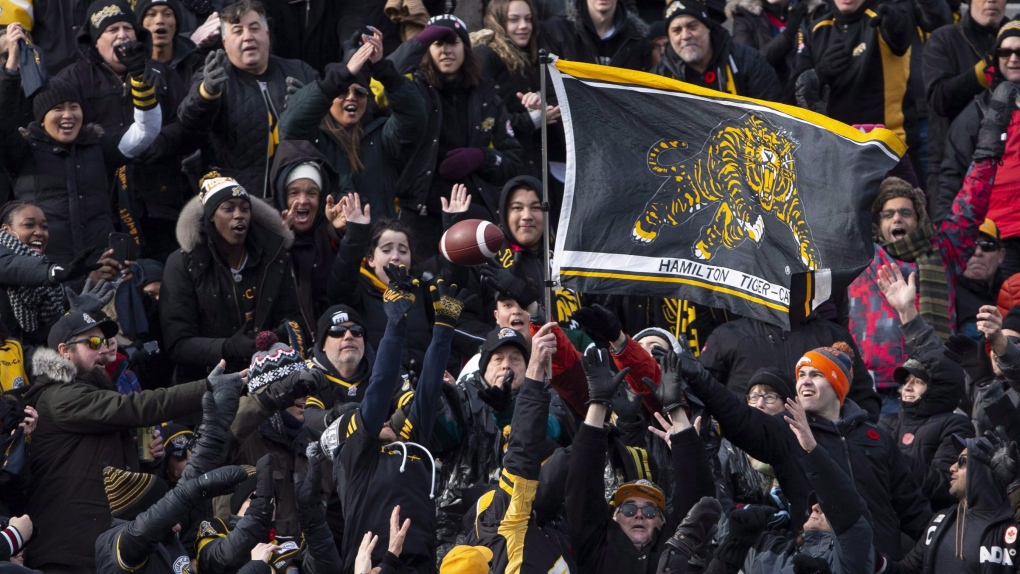 Hamilton Tiger-Cats fans try to catch a ball thrown into the stands during the first half CFL Football division semifinal game action against the B.C. Lions in Hamilton, Ont. on Sunday, Nov. 11, 2018. The Hamilton Tiger-Cats are a feel-good story for a city that has dealt with its share of bad news this year. (THE CANADIAN PRESS/Peter Power)

HAMILTON -- The Hamilton Tiger-Cats are a feel-good story for a city that has dealt with its share of bad news this year.

The Ticats, with roots in Hamilton dating back to the late 1800s, finished atop the East Division with a CFL-best 15-3 record, setting a franchise record for most regular-season wins.

Hamilton hosts the Edmonton Eskimos in the conference final Sunday at Tim Hortons Field -- where the club is 9-0 this season -- and is just two wins away from ending a 20-year Grey Cup drought.

The Ticats, formed in 1950 after the merger of two previous clubs, have provided a welcome distraction for a city that's endured plenty of hardship.

One of the most notable incidents was the tragic death of Devan Bracci-Selvey. The 14-year-old was fatally stabbed outside Sir Winston Churchill Secondary School on Oct. 7 in front of his mother and died in her arms.

"Sometimes when you're living and playing football, it's just a game and it's all fun," Lawrence said. "It just brings you back to reality like, 'Damn, there's real stuff going on in the world.'

"You need to just try to be the best example and role model that you can be, just be aware and give something positive to people to look up to."

That's something Lawrence and other Ticats try to do each year. Like many CFL players, Lawrence and his teammates are very active in the community attending functions or speaking at schools or to groups.

Centre Mike Filer said Ticats players feel it's their obligation to give back to a community that has supported its football team through thick and thin.

"We have a team that's loyal to the community and a community that's loyal to the team," said Filer, a 29-year-old native of nearby Brantford, Ont. "Being a major sports team in this community I think allows us to be interactive with youth as well as our older fans but the youth, for a lot of us, is the main priority.

"Seeing a kid two, three, four years down the road who's said, 'I listened to something you said and you made a difference,' that's what it's all about."

A "Hamilton Strong" flag is passed through the stands at Ticats games.

"That was one thing that hit a lot of us the most . . . a young man was robbed of his life," Filer said. "We're out there to inspire kids to do the best they can, to live their dreams and lives to the fullest and to hear something like that, it crushed many of us.

"We needed to come together as a community and it's sad it took something like that to bring us all together. We should be a lot closer as a community but to see what transpired because of that shows we have a great community that rallies together when times are tough. It's special to be part of."

Other events have put Hamilton in the headlines this year for all the wrong reasons. They include:

-- In July, Statistics Canada published a report showing Hamilton had the highest rate of police-reported hate crimes in Canada. According to the report, the rate of hate crimes reported to the police out of 100,000 people in Hamilton in 2018 was 17.1 compared to the national average of 4.9. Even in Toronto, the rate was 6.4.

-- Then in September, Hamilton police chief Eric Girt issued a statement apologizing for hurting the LGBTQ community with remarks about public sex made in a radio interview. The incident further strained relations between the two sides.

-- Last month, Hamilton police said city resident Ibrahim Issak-Hussen fled to Ethiopia before being identified as a suspect in a fatal shooting outside of a bar. Issak-Hussen is wanted for first-degree murder.

All nine CFL teams strive to be involved in their communities, but the Ticats have long represented Hamilton's blue-collar roots.

On game day, Tim Hortons Field -- which opened in 2014 on the same grounds as venerable Ivor Wynne Stadium -- feels like a community gathering place, its patrons sporting Ticats black and gold colours with jerseys of present-day stars or Hall of Famers such as Angelo Mosca, Garney Henley, Bernie Faloney and Grover Covington, to name a few.

"You walk down the street and sometimes you see the old, old things coming out," head coach Orlondo Steinauer said. "Like the old Ticats logo, the really faded black and really faded yellow coats.

"People maybe dusted them off and are bringing them out."

Tim Hortons Field is located in a modest residential area with Hamilton's steel mills visible in the distance. Dubbed Steeltown, Hamilton has absorbed economic body blows over the years while adjusting to shifting conditions affecting its workforce.

Steinauer, who's also been a player and assistant coach with the franchise, said the Ticats' winning ways could benefit the community.

"People pay more attention to those things and so if it (provides) a bit of a deterrent or distraction for five minutes in someone's day, I do think things like that can help at times," he said. "Not everybody is into sports and that's fine but where there's something positive happening and you have guys consistently at the children's hospital or speaking at assemblies and committed to things off the field . . . I think it can have positive effects."

"One hundred per cent," he said. "I think that's how the organization has always been built, to put the community first.