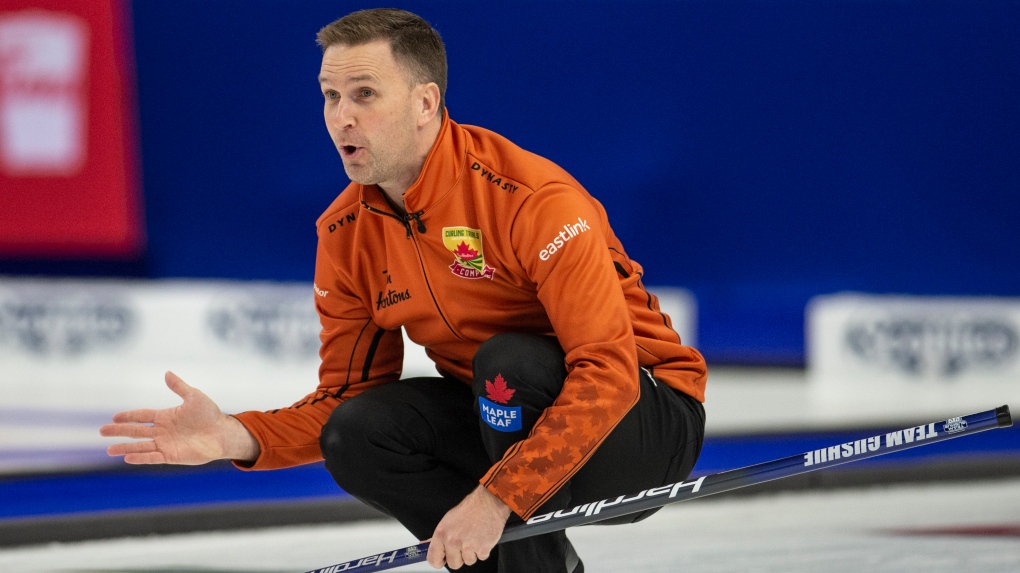 Jennifer Jones stunningly blew a golden opportunity to win the game in the 10th end. The timing of Tracy Fleury's error in the extra end proved even more costly.

When the dust settled, Jones escaped with an enthralling 6-5 victory to book her team's ticket to the Beijing Games.

"We're there to pick each other up when you miss," Jones said. "Not everybody can say that and that's really a big strength of our team."

Brad Gushue earned the men's title later in the day with a 4-3 victory over Brad Jacobs.

A gasp went up throughout SaskTel Centre when Jones missed an open takeout for the victory -- usually a slam dunk for the veteran skip -- with her stone rolling out to leave her with just a game-tying single.

Jones realized halfway down the sheet that the rock was in trouble. She furiously bellowed at her teammates to try to hold it but it curled a little too much.

A stunned Fleury put her hand over her mouth in astonishment.

"We thought we had lost in the 10th for sure," Fleury said. "I think Jen makes that 99 per cent of the time, that shot. So we felt lucky to be able to go to an extra and we really wanted to pull it off there.

"But I didn't make my last two shots."

Jones refocused and put the pressure on Fleury, hoping to make her throw a challenging final shot. Jones drew to the side of the button behind a guard and Fleury missed a runback attempt.

Jones followed with a guard that Fleury rubbed on her final throw to give up the decisive point on a steal.

"I felt close but then it just kind of caught the curl," Fleury said.

The men's final was a tight defensive battle that looked like it was also heading to an extra end.

Jacobs had a chance to hit for a pair but his final stone overcurled and rolled out to give Gushue the win.

The teams blanked four of the first seven ends. In the eighth, Jacobs lost hammer when he jammed on a double-takeout attempt and settled for a hit for one.

Gushue scored the game's only deuce in the ninth end and Jacobs couldn't build enough offence in the 10th before his miss.

Jones and her team of Kaitlyn Lawes, Jocelyn Peterman, Dawn McEwen and Lisa Weagle entered the showdown of Manitoba-based teams with a big edge in experience.

Jones won Olympic gold at the 2014 Sochi Games and has won six national women's titles. Fleury and her team of Selena Njegovan, Liz Fyfe and Kristin MacCuish, were making their first appearance in a trials final.

Early jitters seemed to be a factor.

Rollouts were common in the first end and Jones put early pressure on to generate a quick steal. Jones buried a draw to force Fleury to tap but she brushed her own stone and rolled off.

Jones made some mistakes too as she sent a draw through the rings in the third end, eventually settling for a hit for two. Fleury responded with a pair of her own and Lawes came through in the fifth end with a brilliant triple-takeout that set up a blank.

The top-ranked Fleury team wasn't nearly as dominant as they were throughout most of round-robin play.

Her perfect 8-0 mark gave her the first seed and an off-day ahead of the final. Jones was 5-3 in round-robin play and defeated Krista McCarville in the semifinal on Saturday.

Jones gave away another point in the sixth end when her draw grazed the shot stone and settled on the edge of the four-foot ring. A measure confirmed a single instead of a pair.

Jones decided to retain hammer for the 10th end by giving up a single in the ninth that left Fleury with a 5-4 lead.

Gushue and Jacobs were tied at 7-1 in round-robin play but Gushue took the top seed since he won their head-to-head matchup. Jacobs beat Kevin Koe in the semifinal.

Koe and Rachel Homan skipped the Canadian team entries at the 2018 Pyeongchang Games but both missed the podium. Weagle was Homan's lead that year and joined Jones's rink in March 2020 to form a five-player team.

It will be the third straight Olympic appearance for Lawes, who was Jones's vice in Sochi and teamed with John Morris to win mixed doubles gold four years later in South Korea.

McEwen was also on the Sochi roster.

Jacobs vice Marc Kennedy won gold with Kevin Martin in 2010 and returned to the Games in 2018 with skip Kevin Koe. Jacobs, E.J. Harnden and Ryan Harnden were victorious in Sochi.

Gushue and vice Mark Nichols won gold together at the 2006 Turin Olympics. Their front end of Brett Gallant and Geoff Walker will make their Olympic debut at the Feb. 4-20 Beijing Games.