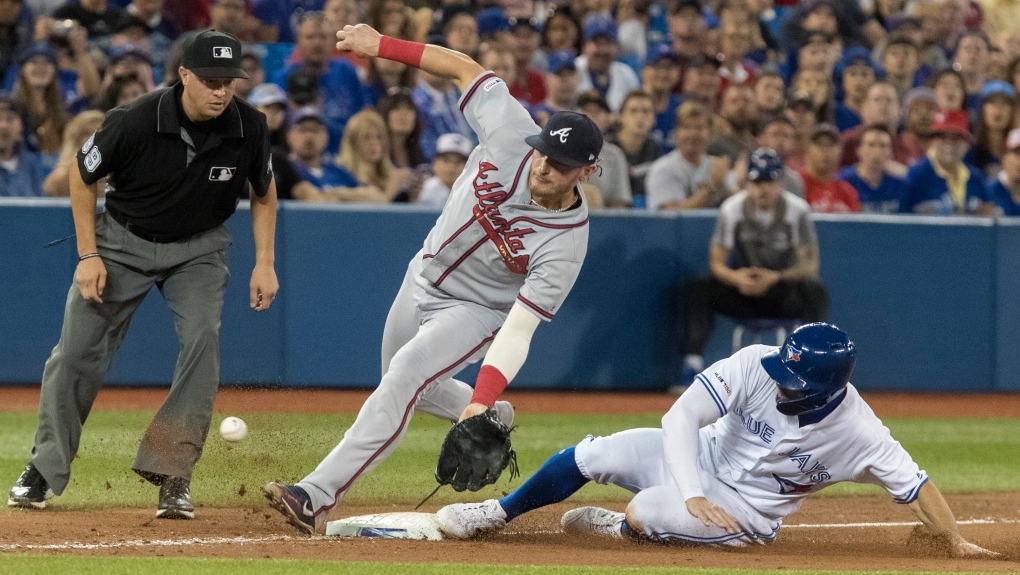 Toronto Blue Jays' Randall Grichuk safe at third base on a passed ball to the plate as Atlanta Braves' Josh Donaldson tries to handle throw from his catcher in the fifth inning of their Interleague MLB baseball game in Toronto Wednesday August 28, 2019. THE CANADIAN PRESS/Fred Thornhill

And that's when he started to find it.

Guerrero had another two hits Wednesday night, including an RBI single, in Toronto's 9-4 loss to the Atlanta Braves.

"Coming from the minor leagues over here you just want to work hard, hit the ball hard, do the best you can and that was probably my problem," Guerrero said through a translator.

"But of course with time I learned to be patient at the plate and thank God everything is going well right now."

He came into Wednesday leading all American League rookies in hits (104) and tied for second in RBI's (58).

Matt Joyce homered as part of a five-run second inning, then added an RBI single in the seventh as the Braves split their two-game interleague series.

Toronto starter Jacob Waguespack (4-2) allowed five runs -- three earned -- and gave up six hits with two walks and two strikeouts in just three innings of work. The rookie right-hander was coming off a stellar outing in Los Angeles last week, where he held the MLB-best Dodgers to one hit and a walk over seven scoreless innings.

"He just wasn't sharp," Montoyo said of Waguespack's outing Wednesday. "It was easy to see early on and somehow he found a way to get out of the first inning."

Joyce led off the second inning with a solo shot and Rafael Ortega doubled in a run to give Atlanta a 2-0 before Waguespack could record an out in the frame. Acuna's double cashed in two more runs and a Freeman single plated another for a 5-0 lead.

Waguespack, who was further hindered by a fielding error from Guerrero, finally got out of the inning when former Blue Jay Josh Donaldson, grounded out.

Guerrero admitted after the game that he still doesn't feel "100 per cent comfortable yet at third base."

"But that's the plan and that's why I come here early every day," he said. "I'll keep working and taking ground balls and we'll see, hopefully I get better every day."

Toronto (54-81) scored two runs in the fourth on a Brandon Drury groundout and a passed ball, and Randal Grichuk added an RBI double the following inning. Guerrero's single in the sixth cut Toronto's deficit to 5-4, but that's as close as they'd get.

Jays reliever Jason Adams opened the seventh with two walks and a hit by pitch to load the bases. He was replaced by Neil Ramirez, but all three runs scored.

Blue Jays rookie second baseman Cavan Biggio, who's been mired in a slump at the plate over the last month, was 1 for 4 with a walk and a run scored. He also had two hits on Tuesday night.

Freeman hit his 35th homer of the season, a solo shot, off Buddy Boshers in the ninth.

Donaldson made his return to Rogers Centre Tuesday for the first time since the Blue Jays traded him to Cleveland last September. He continued to receive standing ovations through his at bats Wednesday.

The 2015 AL MVP with Toronto went 0 for 7 with a pair of walks over the two-game series.

NOTES: Atlanta catcher Francisco Cervelli exited the game as a precaution in the second inning with a left quad cramp. He was replaced by Tyler Flowers. ... The Blue Jays have an off day Thursday before continuing their home stand Friday against the Houston Astros.