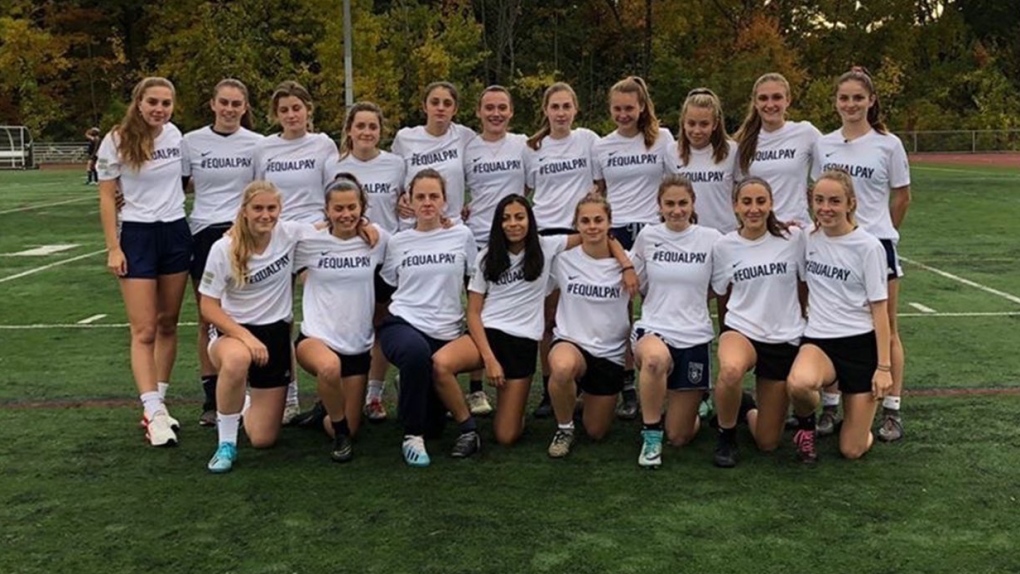 When a girl's high school varsity soccer team in Vermont played a game wearing matching shirts emblazoned with a bold message hidden under their jerseys, they fully expected to be heard.

But just how far their message would reach was a surprise to them all.

With three minutes left in the match on Friday, Burlington High School Seahorses captain Helen Worden, 17, scored a goal, putting her team ahead of the South Burlington Wolves.

As fans erupted in celebration, the Seahorses excitedly ran toward the stands to bask in the glory.

That's when four players peeled off their jerseys to reveal the hidden message: #EQUALPAY.

The move resulted in all four players being penalized with a yellow card from the referee, though the crowd didn't seem to mind.

"The refs issued yellow cards to those four, at which point the crowd started to chant 'Equal pay! Equal pay!' just like in the Women's World Cup this summer," teammate Lydia Sheeser, 14, told CNN.

Inspired by the USWNT

Lydia said the girls were inspired by the U.S. women's national soccer team (USWNT) and "their efforts to achieve equal pay for equal play."

The US national team, which won the Women's World Cup in July, has been outspoken about a range of rights issues, including the gender wage gap in sports. After their 2-0 victory over the Netherlands, the crowd chanted: "Equal pay!"

The pay disparity extends to the World Cup. In the 2019 tournament, the prize money was US$30 million for all teams with US$4 million going to the eventual US champion. Meanwhile, the prize for the 2018 men's World Cup was US$400 million, with tournament champions France receiving $38 million.

Frustrated with the disparity, both on and off the field, the Seahorses partnered with Change The Story, an organization that says it works to "fast-track women's economic well-being in Vermont."

Together, they created the shirts, which they're now selling for US$25. Men are invited to pay an additional 16% (US$4) to represent the wage gap, said Maia Vota, 18, a Seahorses co-captain.

"So right now, in Vermont, the wage gap is US$0.16, which means that women earn US$0.84 to the dollar that the men do on average," said Jessica Nordhaus, Lydia's mom and a member of Change the Story, in a video about the partnership.

"We're working to close that ... so that when BHS girls soccer players are out in the world working full-time, they will be making equal pay for equal work."

The teammates told CNN the response has been overwhelmingly positive.

Community members, including their school's staff and student body, have purchased the shirts. Even the boys soccer team has started wearing them.

So far, the girls have received more than 1,000 orders.

Word of their bold statement has even reached a women's soccer super star.

"Thank you @bhsgirlssoccer for standing up, celebrating and taking your jerseys off for #equalpay," Chastain said. "Proud of you!"

Sen. Patrick Leahy of Vermont also expressed his support for the girls, posting a photo on Twitter of he and his wife wearing the shirts.

"Marcelle and I stand with you!" Leahy said.

Jeff Hayes, the team's coach, said he's thrilled with his players' passion: "I am so proud of this team on what they have done on and off the field."

As for the penalty they received on Friday night, the girls say they're over it. The game ended in a tie.

"We were frustrated at the time because we felt like our actions were appropriate for the moment," said co-captain Maggie Barlow, 17. "In the end, the most important thing is the message we're sending."

In fact, after the game, a referee who penalized the players ordered one of the shirts.

"He told us he was looking forward to wearing it," Helen said.

Thank you @bhsgirlssoccer for standing up, celebrating and taking your jerseys off for #equalpay Proud of you! #rolemodels https://t.co/rgO3O6Ncfu