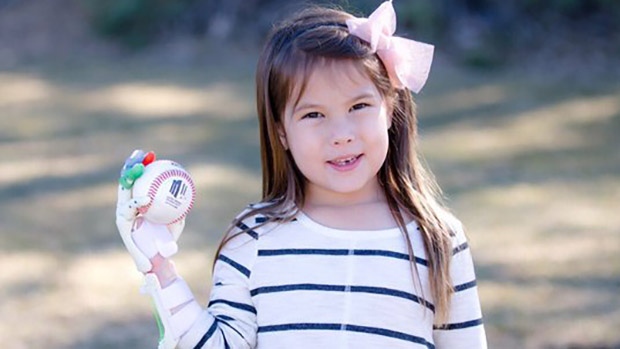 Hailey Dawson holds a baseball with her 3-D printed hand. She hopes to throw the opening pitch at every MLB stadium. (Twitter, via @Haileys_hand)

A little girl with a 3-D printed hand is trying to break a record for the most ceremonial first pitches, and Major League Baseball teams are lining up to help.

According to The Bleacher Report, Hailey Dawson, 7, was born without three fingers on her throwing hand and uses a 3-D printed hand to play her favorite sport.

Dawson is hoping to someday set a Guinness World Record by throwing out the most ceremonial first pitches at major league stadiums.

The University of Las Vegas engineering department designed the hand in 2014, which they’ve named the Flexy Hand 2.

According to the school, it’s held together with fishing line and Dawson controls the fingers with the muscles in her wrist. She needs a new one every year as she grows.

In her quest to throw as many first pitches as possible, Dawson has already knocked the Washington Nationals and Baltimore Orioles off her list.

Since the story broke a couple days ago, MLB teams have lined up to have Dawson visit their stadium.

We've got a first pitch with Hailey's name on it! Please DM us her information so we can reach out

Sounds great! Can you DM us Hailey's info, so we can reach out?

We'd LOVE to have Hailey at CBP!

Can you please DM us her information so we can reach out?

Looks like we need to get you to Fenway, Hailey!

Just DM us with your info and we're in! ⚾️

We would love to have Hailey at AT&T Park! Please DM us her info.

Can you make it up to Minnesota, Hailey? DM us your info and we will make it happen!

According to recordsetter.com, the current record holder for most first pitches at MLB parks is Tom Willis, who boasts 24 pitches on his site. He was born without arms and uses his feet to throw the ball.