Get-up and go: Why women outnumber men at many half-marathons 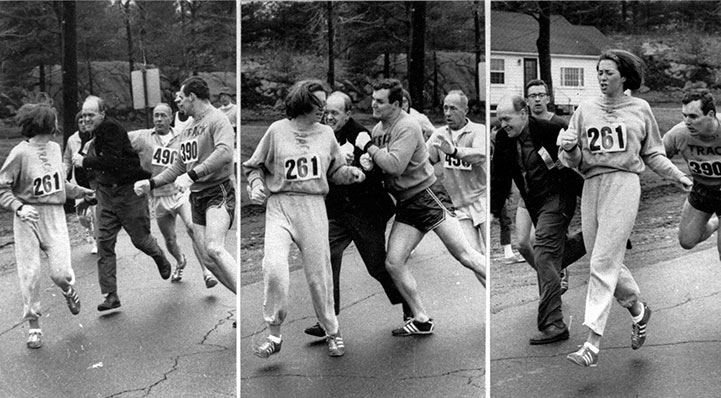 An irate race official tries to forcibly remove Kathrine Switzer from the then all-male Boston Marathon in this 1967 file photo. (AP Images, via Kathrine Switzer's website)

In 1967, 19-year-old track athlete Kathrine Switzer decided she wanted to run the Boston Marathon. So she signed up using only her first initials.

When furious race officials discovered there was a woman on the course, they tried to physically remove her. A hard shoulder check from Switzer's boyfriend put an end to that, and Switzer finished the race. But newspaper cameras caught the moment and pasted the shots on their front pages.

Switzer went on to found a series of running races for women, all the while tearing down myths about why women shouldn't run.

Almost 50 years later, running is so popular among women, they now outnumber men at many races. Switzer is still surprised.

"I always expected to see the day we would be equal in numbers …. But I didn't think it would ever exceed men," she said in an interview from her home in upstate New York.

How big is this blister boom?

Switzer is not surprised women love to run, but she believes they do it for different reasons than men.

"In general, men run to compete, whereas with women, very few are out there to compete," she says.

"Women sign up for races, because there's a wonderful camaraderie. They all have a shared, unspoken understanding that they made a big effort to get there, that it means a lot to do this, to accomplish something."

It's simple to start running: you just lace up shoes and step out your door. But as they get better at running, many find running transforms them on the inside as well. Switzer believes.

"It gives them a feeling of empowerment, a sense of accomplishment, self-esteem, fearlessness and the feeling they can anything they set their minds to," she says.

Those feelings can then translate to the rest of their lives, Switzer says.

Women tell her they've gained confidence at work, asked for raises, started to delegate housework to others, and taken time for themselves.

"And in bad times, it gives them strength, because they say to themselves, 'Well, if I can run 13 miles, I can do anything.' And they can," she says.

Earlier this month, women lined up by the dozens to meet Switzer when she appeared at the Niagara Falls Women's Half Marathon. They asked the 67-year-old, who has 35 marathons under her belt, for running tips, but they also just wanted to thank her and to ask for a hug, something Switzer never minds offering.

Ross Robinson, the race's director, says he decided to host a women's-only race after realizing the atmosphere at the events is something special.

"When it's just women, it's a different dynamic," he says. "…Women are competitive, but there's more camaraderie and support. You don't see a lot of elbows."

Just three years in, the race has grown to more than 2,000 competitors and Robinson expects it to keep growing.

It's a far cry from the early days when Switzer was pushing for women's running events. Back then, she says, it was often women who were angriest with her for encouraging women to run and to step "outside proscribed roles."

Switzer is now working to promote women's racing in Europe and around the world, setting up a network of women's running clubs and events called "261 Fearless," a nod to the numbers she wore at the 1967 Boston run.

Women in Europe haven't embraced racing the way they have in North America, Switzer says. But she says plenty of women are running on their own anyway, inspired by how good the simple act of putting one foot in front of the other makes them feel.

"When I first started running at age 12, I used to think it was magic, because I didn't understand what gaining self-esteem was all about," Switzer says. "But it is magic. And that's why these women are doing it."