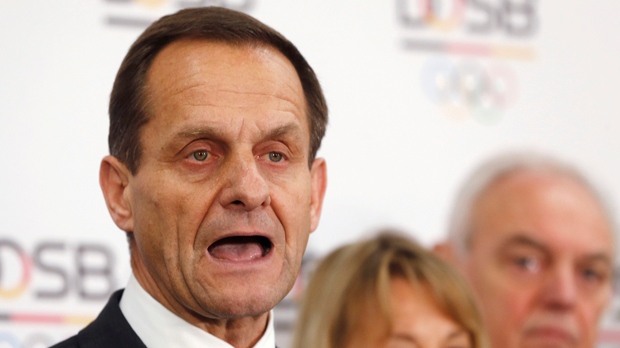 FILE - In this Monday, March 16, 2015 file photo, Alfons Hoermann, President of the German Olympic Sports Confederation DOSB makes a statement to the media, after a meeting in Frankfurt, Germany. (AP Photo/Michael Probst, File)

MOSCOW -- The president of the German Olympic Committee has called for Russia to be banned from the 2018 and 2020 Olympics if sports bosses there are found to have known about state-sponsored doping.

Alfons Hoermann told Die Welt newspaper that bans from the 2018 Winter Olympics in Pyeongchang and the 2020 summer games in Tokyo would provide a "clear signal" of zero tolerance for doping. Twelve Russian medallists from the 2014 Sochi Olympics were accused of benefiting from a massive doping coverup scheme.

World Anti-Doping Agency investigations have accused Russian government officials and anti-doping leaders of running the scheme, but not the Russian Olympic Committee.

Hoermann says if further investigations confirm state-backed doping and show ROC involvement, it would be reasonable for the International Olympic Committee to ban Russia from the 2018 and 2020 games. IOC president Thomas Bach was Hoermann's predecessor as head of the German Olympic body.

"If someone breaches the IOC charter in such a clear way, then they must face the harshest form of punishment," Hoermann said in comments published Sunday.

Hoermann added that it was "hard to imagine" that the ROC would not have known of a mass doping scheme.

"That seems hardly possible in my understanding of a sport organization in such a country as Russia," he said.

Also Sunday, German TV channel ARD broadcast a documentary alleging that a suspended Russian coach has continued working with an Olympic-level runner and that other unnamed coaches continue to give their athletes steroids despite ongoing investigations into Russian doping and a ban on Russian teams in international track and field competitions.

ARD alleged Kazarin was coaching Artyom Denmukhametov, who was nominated by Russia for the 4x400-meter relay at last year's Olympics in Rio de Janeiro but didn't race because the Russian team was excluded over evidence of widespread drug use. Denmukhametov has never failed a test.

Kazarin is not allowed to have any role in sport because of an ongoing investigation into doping among his former group of women's 800-meter runners, and has been recommended for a lifetime ban by the World Anti-Doping Agency. He previously coached 2012 Olympic gold and bronze medallists Maria Savinova and Ekaterina Poistogova, who were both filmed apparently admitting to steroid use in a previous ARD film.

The footage comes a day before a taskforce from track and field's world governing body, the IAAF, is due to visit Moscow for meeting with state officials and the leadership of the Russian track federation, known as RusAF.

"If it is indeed one of the coaches that has been provisionally suspended by the IAAF, then RusAF should have enforced, been in a position to enforce, that suspension," IAAF general secretary Olivier Gers told ARD. "And therefore RusAF has not fulfilled the conditions for reinstatement."