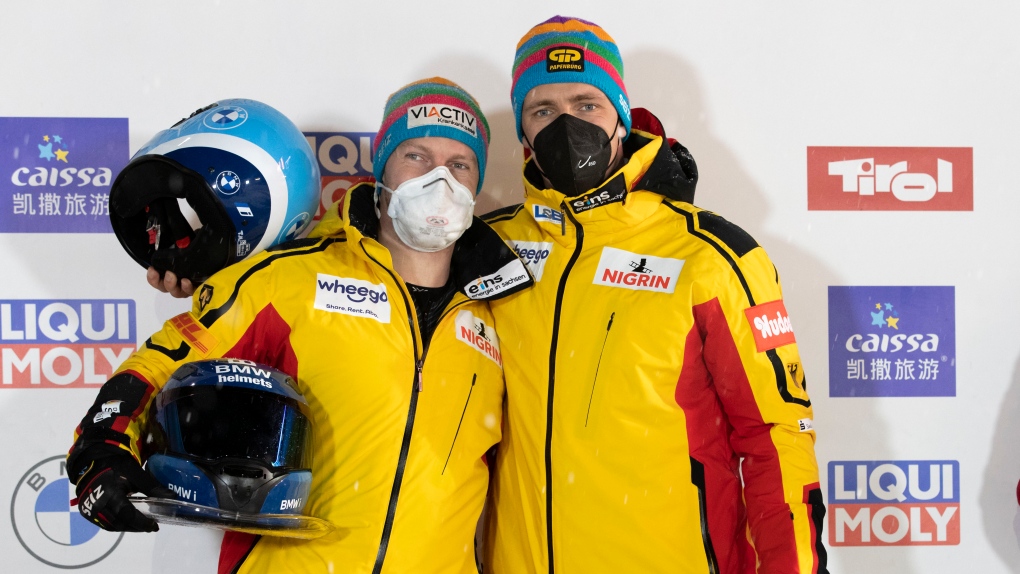 The winners Francesco Friedrich and Thorsten Margis from Germany pose for a photo after the 2-man bobsleigh World Cup race at the award ceremony in Igls, near Innsbruck, Austria, Saturday, Nov. 27, 2021. (AP Photo/Lisa Leutner)
IGLS, Austria -

Germany's Francesco Friedrich has extended his streak to 34 consecutive World Cup two-man bobsled races with a medal, guiding his sled to an easy win over countryman Johannes Lochner on Saturday.

Friedrich and brakeman Thorsten Margis finished two runs in 1 minute, 43.48 seconds. Lochner and Christian Rasp were second in 1:43.84, and the Canadian team of Justin Kripps and Cam Stones won bronze in 1:43.96.

Friedrich has won 27 golds and seven silvers during his two-man World Cup medal streak -- not even including the Olympic two-man gold from the 2018 Pyeongchang Games that he shared with Kripps, and three two-man world titles in that span.

Codie Bascue and Carlo Valdes were 10th for the U.S., while Hunter Church and Hakeem Abdul-Saboor finished 20th.

The U.S. got two top-six finishes in women's monobob, with Elana Meyers Taylor improving to 2-for-2 on the season with another victory. Germany's Laura Nolte was second, and Breanna Walker of Australia was third.

Canada got fourth and fifth with Christine de Bruin and Cynthia Appiah, and reigning world champion Kaillie Humphries was sixth for the U.S.

The bobsled weekend concludes Sunday in Igls with women's bobsled and four-man competitions.