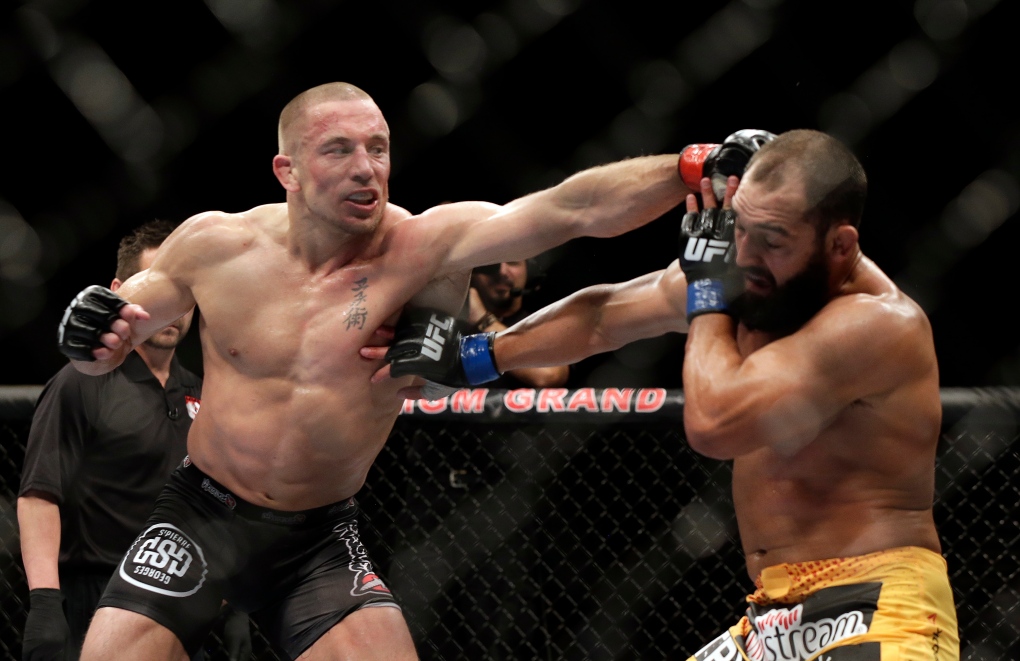 LAS VEGAS -- Peeking over his shiny championship belt, Georges St-Pierre looked anything but a winner at the UFC 167 post-fight news conference.

His swollen forehead was covered with red welts like a horrific case of acne. There were cuts under both black eyes. His battered face looked like he had been in a car crash. Perhaps more worrying was the hidden hurt inside.

Moments after winning a controversial razor-thin split decision over No. 1 contender Johny (Bigg Rigg) Hendricks on Saturday night, the battered UFC welterweight champion hinted at retirement in cryptic post-fight comments in the cage -- citing unexplained personal issues and the need to step away -- before being transported to hospital.

When he returned to the MGM Grand Garden Arena midway through the post-fight news conference, the Canadian poured gasoline on the fire.

He declined to detail the issues. UFC president Dana White, after meeting privately with the 32-year-old from Montreal, said St-Pierre's personal problems "aren't as bad as he thinks they are."

"Yeah, we'll get through this," he added.

Still St-Pierre, the biggest draw in mixed martial arts, essentially suffered a meltdown inside and outside the cage.

"I gave everything. I left my soul in the Octagon tonight," he said of the gruelling battle with Hendricks.

For UFC president Dana White, it was a nightmare finale to a card billed as a celebration of the UFC's 20-year anniversary.

White was irate that two of the three judges had scored the fight 48-47 for the champion, giving him three of the five rounds and a split decision. And then he heard his pay-per-view king say out of the blue that he was walking away from the sport -- for how long, nobody knew.

While St-Pierre (25-2) was receiving treatment, White seethed at the decision in post-fight news conference.

"It's about damage. This is a fight. It's whoever inflicts the most damage," he said, "He (St-Pierre) got hurt, he got wobbled, he got dropped.

"Yeah, I'm blown away that Georges St-Pierre won that fight. And listen, I'm a promoter. He's the biggest pay-per-view star on the planet for me. And I still don't think he won that fight. I want what's fair and that wasn't fair.

"I think the Nevada State Athletic Commission is atrocious. I think the governor needs to step in immediately before these guys destroy this sport like they did boxing."

Judges Sal D'Amato and Tony Weeks scored rounds one, three and five for St-Pierre. Glenn Trowbridge scored the first, second and fourth for Hendricks. White gave all but round three to Hendricks (15-2).

St-Pierre, who arrived 30 minutes into the news conference after receiving medical treatment, said he thought he won three of the five rounds, with the final round being the decisive one. But he sounded anything but convincing. And White saw a different emotion from the GSP camp in the cage as they awaited the decision.

"They were acting like they lost the fight. They all looked like they wanted to kill themselves."

As reporters tried to get the champion to elaborate on his post-fight comments about what was troubling him, St. Pierre's eyes glistened. At one point, former light-heavyweight champion Rashad Evans -- who has trained with St-Pierre -- leaned over and gave him a supportive squeeze.

White eventually stepped in as the questioning continued.

"Don't answer that question," he said to St-Pierre.

When the news conference ended, White put his traditional scrum with reporters on hold to huddle with St-Pierre. He was much calmer upon his return, saying he believed St-Pierre would be ready to fight again when his time came -- with a rematch against Hendricks top of the list.

"One of the things that makes Georges as great as he is, is things drive him crazy. Little things drive him nuts," he said of St-Pierre, who has admitted to being obsessive and a perfectionist as a fighter.

"Like the whole obsession thing ... he's very much that way and he's obsessing over something else right now that might seem like the end of the world but it's not."

White had not been as calm earlier at the post-fight news conference, raging at GSP's request for time off prior to the champion's arrival.

St-Pierre, who is unmarried, offers little about his private life. But he suffered in the days leading up to his first title defence -- a shock loss to Matt Serra at UFC 69 in April 2007.

He later revealed his father had been seriously ill and a cousin was in a coma after a car accident. There were other family issues. Injuries cut into his preparation. Plus there was talk he let the aura of being champion go to his head.

St-Pierre has not lost since, regaining his title a year later in April 2008.

White was asked whether the personal issues had affected St-Pierre's performance against Hendricks.

"Talking to him now, it would be tough to say now. He got his ass whupped tonight. That's what happened."

Hendricks, a former NCAA champion wrestler with one-punch knockout power, did what other challengers could not do. He took GSP out of his game, blunted St-Pierre's wrestling attack for much of the night and hurt him with strikes and knees.

And while both men weighed in at the 170-pound welterweight limit Friday, the stocky five-foot-nine Hendricks likely weighted 195 to 200 pounds when he entered the cage 30 hours later.

The bigger fighter, Hendricks bullied St-Pierre in the clinch with strikes and knees. And he caused damage with strikes from range.

St-Pierre's face traditionally shows damage, which can exaggerate the tone of a fight. But normally he is winning the striking battle. White said the champion's face was the worst he had ever seen, other than heavyweight Junior Dos Santos' misshapen mug after a loss to Cain Velasquez.

St-Pierre admitted that he had trouble seeing out of one eye and had lost track of what stage the fight was at. The champion, who almost never is pulled into deep water, was far out to sea Saturday.

Hendricks matched quantity of strikes with power. And, at times, he bullied a champion used to dominating the action.

"Look at him and look at me," said Hendricks, whose face looked essentially unmarked. "My hands are busted up from hitting him in the face and the belt's not here. It sucks. But I promise you that belt will be mine."

The statistics paint a picture of a close fight. St-Pierre led 101-85 in significant strikes although the challenger had a 142-125 edge in total strikes over the five rounds, according to FightMetric.

St-Pierre, who leads the UFC in career takedowns, landed three of six takedown attempts. Hendricks converted two of fours times -- GSP had been taken down just twice in his last 11 fights.

It was a bitter pill to swallow for Hendricks, whose four-year-old daughter Abri had predicted in a YouTube video that "my daddy's going to put you to sleep, GSP."

"The judges ripped my heart out tonight," Hendricks said.

He may rue several of his own decisions on the night, like allowing St-Pierre to get off the floor to allow the fight to resume on the feet.

"For whatever reason, he didn't finish the fight and it bit him in the ass," said White.

While it may come with an asterisk in the eyes of some, it was a record 19th win in the UFC for St-Pierre, moving him past Hall of Famer Matt Hughes at 18. It also extended his string of victories to 12, the longest current run in the UFC.

The victory also moved GSP past former middleweight champion Anderson Silva for most wins in UFC title bouts at 12.

Saturday's win was GSP's ninth successful title defence and ninth straight title defence, one behind Silva in each category. And it was his 14th championship fight, one behind Randy Couture.

St-Pierre also extended his UFC mark for most championship rounds fought to 52.

Hindsight being 20-20, it would probably have simplified the night if St-Pierre had opted to delay his talk of a hiatus until down the road.

But as the champion noted, he spoke his mind after going through an unprecedented ringer.

"I'm just came out of a freaking war. He hit like a truck. My brain got bashed left and right inside my skull," he said with an uneasy laugh.

In a sports landscape littered with concussion casualties, it was an uncomfortable analogy.

The victory may have been controversial, but St-Pierre was classy as ever in thanking Hendricks the fans and the UFC.

"I hope they appreciate the show," he said. "I gave it (my) all. I left everything in there."

White correctly surmised that down the road, few will remember the controversy surrounding the fight.

"This one won't affect Georges St-Pierre. it's a W, it's a win. He did not win the fight tonight, but the judges said he did. And it's not Georges' fault."

Still the judging controversy and GSP's post-fight comments did little to make the 20-year UFC anniversary card a night to remember.

"It rained on our parade a little bit," White acknowledged. "Yeah, it did."