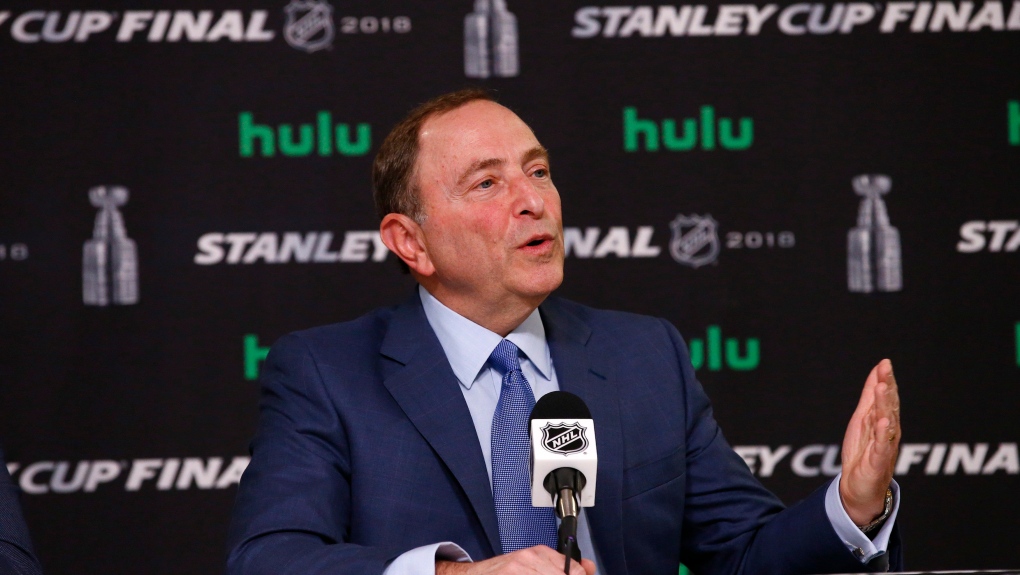 NHL Commissioner Gary Bettman speaks during a news conference prior to Game 1 of the NHL Stanley Cup Final hockey game between the Vegas Golden Knights and the Washington Capitals, Monday, May 28, 2018, in Las Vegas. (AP Photo/Ross D. Franklin)

LAS VEGAS -- NHL commissioner Gary Bettman trumpeted the success of the first-year Vegas Golden Knights at his state of the league press conference before Game 1 of the Stanley Cup final.

He also avoided an uncomfortable question about concussions.

Bettman and deputy commissioner Bill Daly met with reporters about two hours before the opening faceoff between the Knights and the Washington Capitals on Monday in the same arena where Vegas announced its expansion draft selections just 342 days earlier.

"You go through the checklist: great building, great ownership with Bill Foley, a market that we believed would support the team," Bettman said. "And then there was a fourth factor: we thought being in Las Vegas would actually give hockey a greater presence, and make the league and the game stronger."

Bettman also shared an anecdote from the unveiling of the team's name that made him believe Vegas would work.

"The 5,000 people, as I was walking up to the podium, started booing," the commissioner said. "My reaction was, 'I want to thank you for that reception, you just proved to me you're ready to be an NHL city."'

While some argue a club making the final in its first season is bad for the game, the NHL, not surprisingly, disagrees.

The league's potential expansion was also touched on, with Bettman saying the league's board of governors will provide an update in June, and could have an announcement by next fall or early winter.

"There is no delay, we just haven't got the train to the station on time," Bettman said. "There is a process that we go through."

Bettman and Daly both reiterated the expansion draft rules will be the same if and when the NHL adds a 32nd franchise.

"The goal of creating the expansion draft rules was to create an opportunity to be a competitive team earlier than some of our past expansion teams have," Daly said. "Giving them a chance to have competitive success on the ice was important to the business success."

While there were plenty of positives for Bettman and Daly on Monday, not all the topics brought up were rosy from the NHL's perspective.

The league is currently facing a lawsuit from more than 100 former players who allege it had the resources to better prevent head trauma, failed to properly warn players of such risks and promoted violent play.

Bettman was asked Monday about his assertion in a deposition on July 31, 2015, that: "There's no medical or scientific certainty that concussions lead to CTE."

"I'm not going to start another news cycle," he said. "There's nothing new on the subject."

Bettman was also asked about a report out of Ottawa Monday that former Senators captain Daniel Alfredsson told a blogger and former newspaper columnist that he hopes Eugene Melnyk sells the team.

Alfredsson reportedly wanted those comments to stay off the record, but the blogger still published the quotes.

Melnyk has had a strained relationship with his fanbase in recent years, with some fans paying for billboards in the nation's capital with the hash tag "MelnykOut."

"I can tell you for sure the franchise is not for sale," Bettman said. "Eugene Melnyk is committed to the Senators and is passionate about them."