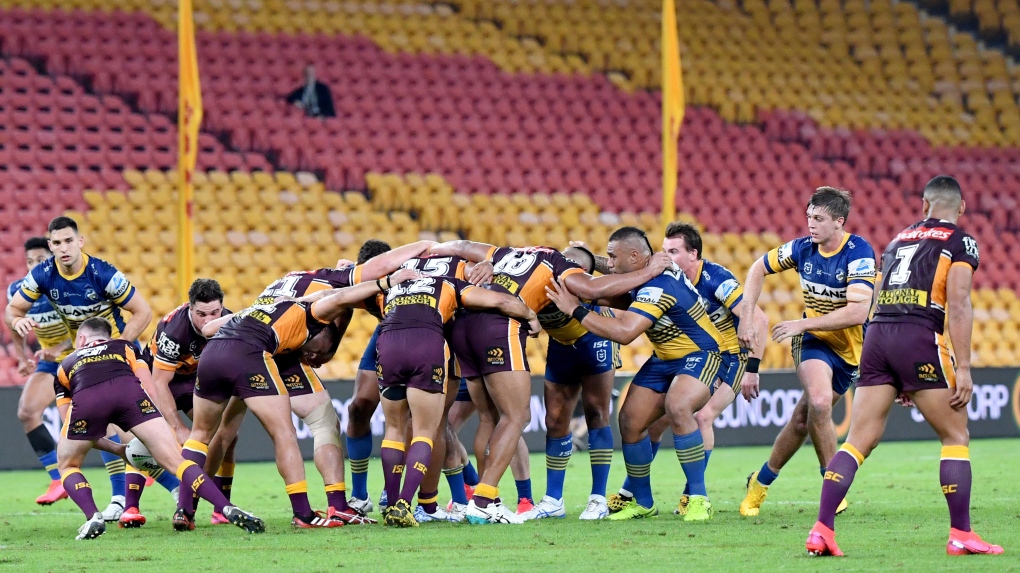 The Parramatta Eels and the Brisbane Broncos of the National Rugby League resume play without spectators, Thursday, May 28, 2020, in Brisbane, Australia. Two rounds of matches were played in the NRL in March before Australia and New Zealand went into lockdown and closed borders in a bid to slow the spread of COVID-19. (Darren England/AAP Image via AP)

BRISBANE, AUSTRALIA -- With the sound of skin slapping skin and an echoing oomph of air escaping lungs as players collided at pace, the National Rugby League led the charge for elite sports returning to action in Australia.

It was the furthest thing from the strict social distancing regulations that have been the norm in Australia in the coronavirus pandemic.

Parramatta flew in just four hours before kickoff and still beat the Brisbane Broncos 34-6 on Thursday night in an empty Suncorp Stadium, the lack of spectators being a trade-off for the NRL being allowed to resume following a two-month hiatus.

While a TV audience heard artificial crowd noise piped into the broadcast, in real time it was a vastly different experience.

Clear and distinct were on-field exchanges usually drowned out by crowd noise, such as players calling moves and the referee laying down the law.

The opening bone-jarring collision between Parramatta forward Regan Campbell-Gillard and Broncos tacklers signalled a genuine easing of the lockdown when it was broadcast across Australia in prime time. It was the first live action in any elite sport here since March 22.

The 52,500-seat Suncorp Stadium is locally known as The Cauldron, for its infamously unfriendly welcome to visiting teams.

But there was no hostile reception for Parramatta, with only 250 people allowed into the stadium, including players and others deemed necessary to stage the game.

Caxton Street, which runs toward the stadium and is usually swarming with fans on a game night, was eerily quiet. Restaurants and bars are restricted to a maximum of 10 guests, and fans have been urged not to gather around stadiums. Although there were some exceptions.

Mike Simpson and Peter Rowe, self-described "rugby league tragics," drove for an hour, and parked on a street adjacent to the stadium that is usually off limits at game time. They set up chairs, leaning against the stadium, shared a pizza and watched the game -- from across the road and through a window -- on a big TV in a bar.

"This is the next best thing," Simpson said. "Big screen TV, outside Suncorp Stadium. You can't get much better. We live and breathe it."

Suncorp is one of six stadiums being used during the first phase of the NRL's resumption. The next phase, a proposal to have fans back in the stadiums by July 1, has been criticized as "absurd and dangerous" by the Australian Medical Association.

Two rounds of matches were played in the NRL -- the first with fans, the second without -- before Australia went into lockdown in a bid to slow the spread of COVID-19. Australia has recorded 7,150 cases and 103 known deaths, although the rate of infections is now low. The New Zealand Warriors underwent two weeks of quarantine in Australia to satisfy new bio-security requirements for a return to play, and will be in action on Saturday against the Dragons -- one of seven NRL games over the next three days.

Everyone has to undergo heat checks before entering the stadium, and Broncos halfback Brodie Croft had to go into isolation briefly after two slightly high readings before a third temperature test cleared him to play. He scored the Broncos' only try.

Other health protocols were put in place on the field, including the ball being cleaned with sanitizer every time it went out of bounds.

There'll be 18 more rounds, taking the regular season to 20 games for each team. The season-ending grand final is scheduled for Oct. 25.

Parramatta leads the competition with three wins, albeit with 67 days between wins two and three.

Before kickoff, Broncos captain Alex Glenn said there'd still be "a lot of eyes watching the footy" despite the lack of a crowd.

"We are the first sport that is going to be back (in Australia) and televised," he said. "I think the whole nation, (and) New Zealand and England are going to be watching so it's still a huge occasion."

Glenn was taken to a hospital for treatment on a deep cut on his leg when his team was down 12-6. Broncos coach Anthony Seibold said Glenn will have surgery, as a precaution to ensure the wound is clean, on Friday morning.