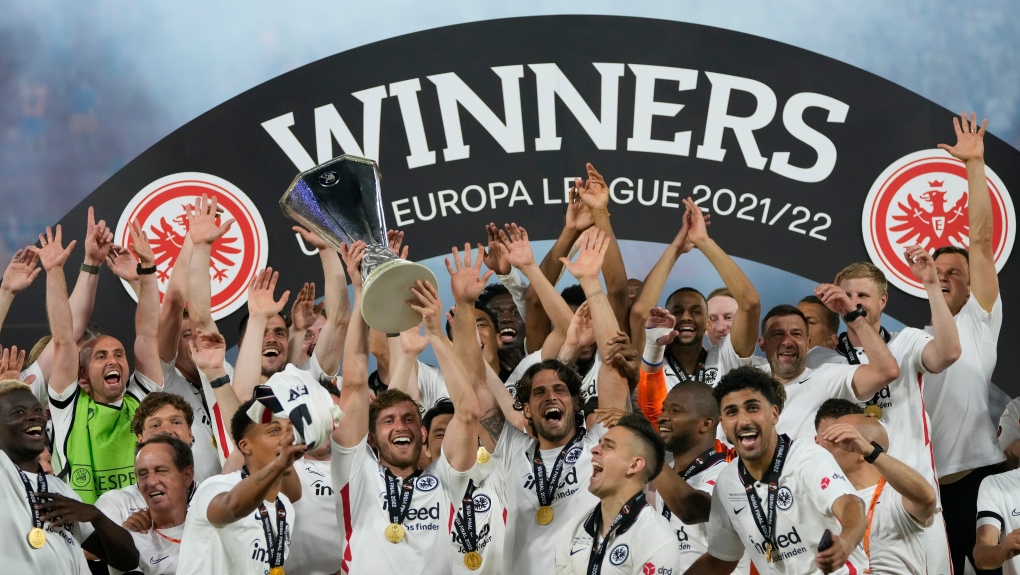 Eintracht Frankfurt's 42-year wait for a European trophy is over.

The German club ended its title drought with a penalty shootout win over Rangers in the Europa League final on Wednesday.

Goalkeeper Kevin Trapp came up with a big save at the end of extra time and another in the shootout to help give Frankfurt the 5-4 win on penalties. The game ended 1-1 after regulation and extra time.

Colombia striker Rafael Borre, who scored a second-half equalizer for Frankfurt, converted the decisive penalty to clinch the club's first European trophy since the 1980 UEFA Cup, a predecessor to the Europa League. The win also secures a first appearance in the Champions League next season for Frankfurt.

“It feels incredible,” Trapp said. “I'm trying to catch my breath still. For us, for Frankfurt, for the region. For the whole of Germany I think it's a wonderful thing. To be able to give back to our fans this way is so special.”

Trapp, a former Paris Saint-Germain goalkeeper, made a key save in the final minutes of extra time by stretching out a leg to stop a close-range shot by Ryan Kent. The veteran goalkeeper used his left leg to stop Aaron Ramsey's penalty in the shootout, setting off huge celebrations by Frankfurt's “white wall” of fans behind the opposite goal.

There were also wild celebrations back in Germany as Frankfurt fans packed the club's stadium to watch a telecast of the final.

Joe Aribo gave Rangers the lead in the 57th minute and Borre equalized in the 69th for Frankfurt, which became the third team to go through the Europa League unbeaten after Chelsea in 2019 and Villarreal in 2021.

Ramsey, the former Arsenal and Juventus midfielder, entered the match in the final minutes of extra time to be in the shootout. Christopher Lenz, Ajdin Hrustic, Daichi Kamada and Filip Kostic also converted penalties for Frankfurt, while James Tavernier, Steven Davis, Scott Airfield and Kemar Roofe found the net for Rangers in the shootout.

“It's the small margins when you get to this stage of competitions,” Rangers captain Tavernier said. “It was in our own hands but we conceded that goal and then Trapp makes a great save from Ryan Kent. Then he makes the save in the shootout and we are all just devastated.”

“You have to score those, especially in the last minutes,” he said.

Rangers was trying to win its first European title since the Cup Winners' Cup in 1972. The Scottish club also lost to Zenit St. Petersburg in the 2008 UEFA Cup. It was trying to cap a comeback 10 years after it was sent to the lower divisions because of a financial meltdown.

“It's going to be a sore one to take,” Rangers midfielder Davis said. “We know how difficult it will be to get to this stage again.”

Frankfurt will return to the top flight of European competition for the first time since 1960, when it lost in the European Cup final to Real Madrid in Glasgow.

The game had been mostly even until a mistake by Frankfurt's Brazilian defender Tuta, who tripped while trying to chase down a routine back header. That allowed Aribo to speed past him to open the scoring at Sevilla's Ramon Sanchez-Pizjuan Stadium by calmly sending a low shot past Trapp.

Tuta had to be substituted after getting injured in the incident. It was Aribo's first Europa League goal this season.

Frankfurt equalized 12 minutes later with Borre sliding in between two defenders to convert a cross by Kostic from the left flank. He came from behind central defender Calvin Bassey to send the ball past veteran goalkeeper Allan McGregor.

There was fan violence outside the stadium before the match, with supporters from both clubs throwing chairs and tables at each other. Five German fans were detained the night before after a confrontation with police. More than 150,000 fans came to the southern Spanish city, most of them without tickets for the final at the 43,000-capacity stadium.