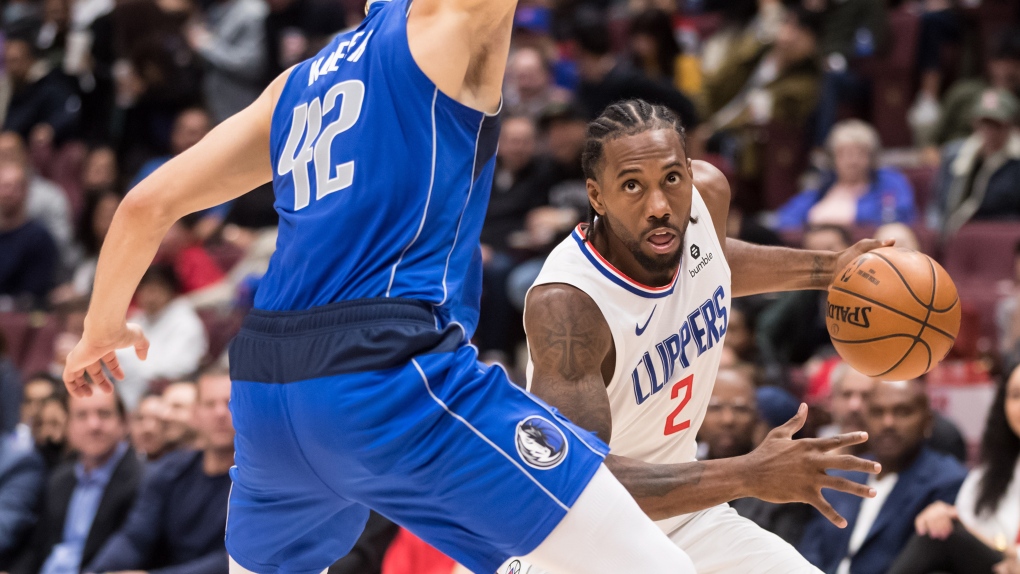 The latest example came Thursday when Leonard made his Canadian homecoming with the Los Angeles Clippers for a pre-season game in Vancouver. But it wasn't the first time the reigning NBA Finals MVP received a warm greeting from Canucks since leaving Toronto.

"Just going around in the summer time, even after me signing with the Clippers, Canadians came up to me and they said thank you for everything I've done," Leonard said after the game against the Dallas Mavericks.

Leonard became one of Canada's most popular athletes last season as he led the Raptors to their first-ever NBA championship and was named Finals MVP after averaging 30.5 points per game in the extended playoff run.

Hopes were high that the success would entice the 28-year-old to continue playing up north, but Leonard opted to join his hometown Clippers in free agency, reportedly agreeing to a three-year, US$103-million contract.

Still, Canadian basketball fans showered him with love Thursday, cheering boisterously when he jogged out for warmups and repeating the cheers every time he hit a shot in the Clippers' 102-87 loss to the Mavericks.

A similar scene greeted the team as players walked through Vancouver's streets before the game, said Clippers rookie Terance Mann.

"Definitely a lot of fans here. It was nice to see, especially for Kawhi," he said. "It was awesome to see him come back to Canada and everybody give him a warm welcome."

As the pre-season comes to an end, there's one piece of business still outstanding for last season's NBA championship-winning Raptors -- raising the title banner to the rafters.

That will happen Tuesday when Toronto hosts the New Orleans Pelicans in the season opener. Leonard will be in California during the ceremony, preparing for the Clippers' battle with LeBron James and the L.A. Lakers later that night.

The former Raptor says he still plans to keep an eye on the celebration.

"I'm going to probably check it out," Leonard said.

His focus, however, has already turned to the season ahead.

For weeks now, the Clippers have been working out in training camp, building systems and creating new bonds.

"You just know personalities so you just get more comfortable talking to people, knowing what they like, they know what I like and just going from there, pretty much," Leonard explained.

"That's why you just kind of want to get around guys early so you can build the team chemistry and you can feel comfortable talking to someone when you're on and off the floor."

One prominent face has been missing from on-court drills, however. Paul George, who came to the Clippers this off-season after being recruited by Leonard, has resumed training after undergoing surgery on both shoulders during the off season.

With a key player still to join, it's hard to say what the Clippers will look like early on in the year, Leonard said.

"We'll just have to see how it plays out," he said. "We still have to find a rhythm with each other playing together. But I think we're going to do well."

Leonard is no stranger to returning from a major injury. Playing for the San Antonio Spurs in 2017, he suffered a quadricep injury and when he was traded to the Raptors in the summer of 2018, staff had to carefully consider what the star's body could handle.

They came up with a "load management" regime that saw Leonard play 60 regular-season games, while sitting out for 22.

It's not a schedule that Leonard plans to follow again this season.

"I was injured last year coming in so it was the only way I could play the schedule and not really affect the team outcome," he said. "So this year will be a lot different."

Outside expectations for the Clippers are high this season. A survey of NBA general managers picked the team as the one to beat for this year's championship title.

Inside the locker room, the players are taking the season one step at a time, Leonard said.

"It's not about what people think or what they pick," said Leonard, who will make his return to Toronto on Dec. 11 when the Clippers face the Raptors. "It's about the work we do and what our mindset's going to be. If we don't want to win, we're not going to win. And if we want to, then we have a big chance to win."