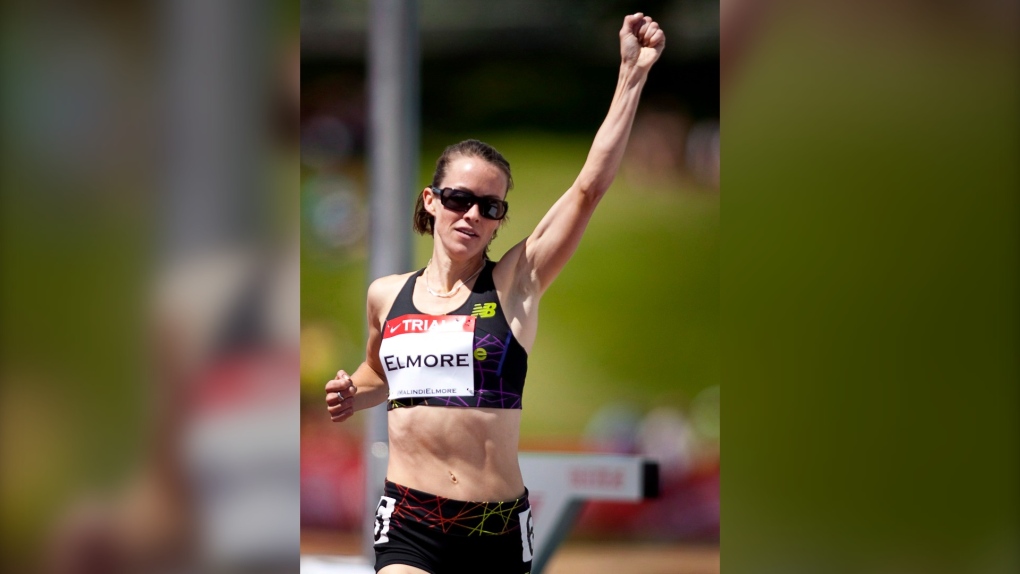 HOUSTON -- When Malindi Elmore reinvented herself as a marathon runner a year ago, she had no idea it would carry her back to Olympic starting line.

But just two months shy of her 40th birthday, and 16 years after her Olympic debut, Elmore crushed the Canadian women's marathon record on Sunday, all but booking her spot on the team for the 2020 Tokyo Games.

"I hope it happens, it's going to be amazing, and just such an incredible full-circle story for me in my life," Elmore said. "I never thought at 24 that I would be coming back at 40 in the marathon that's for sure."

Elmore's story is one of resilience, reinvention and a rediscovered love for the sport. Once one of Canada's top middle-distance runners, she ran the 1,500 at the 2004 Athens Games, missing the semifinals by one spot. She didn't qualify for either the 2008 or 2012 Olympics and retired from track, both disillusioned and disheartened.

"To look back on the highs and lows of my track career, it is just really really special to feel like the door didn't entirely close, and that I'm kind of paying myself back for a lot of the hard work and heartache that I went through in my past life, with track and then just loving it again is fantastic," she said Sunday.

Elmore switched to the triathlon, and her Ironman time of 8:57:22, set in Arizona in 2016, was the fourth fastest in Canadian history. But after becoming both a business owner -- in event-planning and coaching -- and a mom to two boys, aged one and five, she found triathlon training too time-consuming.

And so with her husband Graham Hood -- a two-time Olympian on the track -- writing her training program, she made her marathon debut at the same Houston race a year ago. Her time of 2:32.15 told her an Olympic spot was there for the taking.

Elmore said her recent training runs were tracking toward a possible 2:24 time. And once pushed off from the start line Sunday, she never doubted she was in for a great race.

"I just kind of knew early on I was going to have a good day, it felt great and it was clicking, and it felt like I was running a pace that I could do for a really really really long time, which is a good thing in a marathon," she said.

With Askale Merachi of Ethiopia out in front by herself, Elmore was battling it out in a pack of four with about five kilometres to go.

The Canadian was in fourth with the finish chute in sight.

"With 200 metres to go, I was really close to second and third, I was in fourth, and I thought 'I'm going to regret not giving it one last go to move up a position,' so I had to channel my inner 1,500 finish over the last 200 and close in well," she said.

"But I just knew all day I was having a great run, things felt really comfortable and smooth, and it was clicking."

Merachi won the race in 2:23:29, while fellow Ethiopian Biruktayit Degefa Eshetu took the silver in 2:24:47.

Cliff's marathon record wasn't the only one to fall Sunday. Natasha Wodak of Vancouver ran 1:09.41 in the half-marathon to break Cliff's record of 1:10.06 she set just last month. Wodak finished 17th.

Elmore won't be officially named to the Olympic team until after the window for qualifying closes in May -- the qualifying time is 2:29.30 -- but being two minutes faster than the rest of the field makes her virtually a sure bet.

Tough Olympic standards cost Elmore a trip to both the 2008 and 2012 Olympics. She won the national championships in 2012, but was just shy of the qualifying time. She was rounding back into form in 2008 from a stress fracture but narrowly missed the tough standard that set was based on performance potential against a global field full of dopers.

Had Elmore not tried a marathon, she said she would still be satisfied with "the way my life has turned out and really grateful for so many things that are going on.

"I think that's partly why I'm able to run really well right now, because we're doing this on our own terms, we're doing this because it's a fun challenge. Because I love to race and compete but I feel very fulfilled with how things have gone in the last few years regardless."

Elmore and fellow marathoners such as Canadian Krista DuChene, who's 43, are also helping redefine biases about what's considered the peak running age.

"I think that we've got more in ourselves than we sometimes give ourselves credit for as we get older, right?" Elmore said. "We just have life experiences and resilience and other strengths that come to play."

The Olympic women's marathon is Aug. 8 in Sapporo.