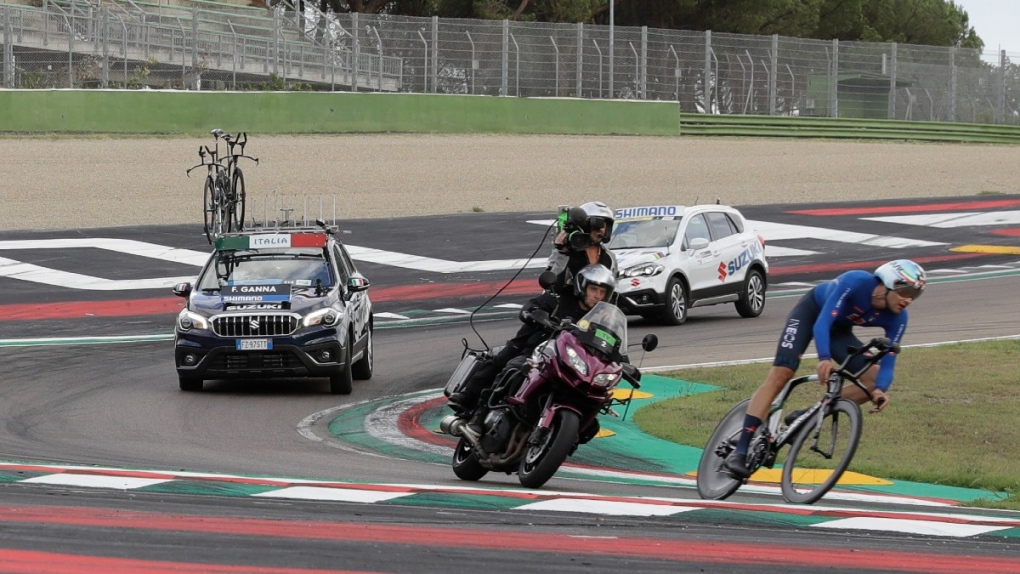 IMOLA, ITALY -- Filippo Ganna on Friday became the first Italian to win the men's time trial at the road cycling world championships -- and he did it on home turf.

Ganna was the penultimate rider to set off and he was cheered on passionately by Italian fans lining the 32-kilometre route, which started and ended on Imola's auto racing circuit.

The 24-year-old beat Wout van Aert of Belgium by 26.72 seconds. Swiss cyclist Stefan Kung was third, 29.8 seconds behind the winner.

"So much happiness," Ganna said with a laugh when asked to describe his emotions. "I didn't expect it."

"Up until three days ago," he said, "I was with friends and we talked about everything apart from cycling and the world championships. I arrived here really relaxed and without any pressure and maybe that was also the secret behind my good performance."

Dennis and Thomas were almost 40 seconds behind their Ineos Grenadiers teammate Ganna.

Ottawa's Alex Cataford was top Canadian in 41st place. Hugo Houle of Sainte-Perpetue, Que., did not start, electing for more recovery time after the Tour de France ahead of the Sunday's road race -- which comes one week after the finish of the Tour.

Pacing was more key than usual as there were strong headwinds in the first part of the course, heavy crosswinds in the centre sections and a tailwind on the way back.

Ganna flew out of the blocks and had a 35-second advantage over Thomas -- the leader at the time -- at the intermediate check.

"I started hard because we knew the speed was high on the return so there wasn't much difference," Ganna said. "So I pushed hard from the start and then we tried to manage the end. We decided not to risk anything in the more technical parts and we managed to get this really great result."

The worlds were moved to Imola after Swiss host Aigle-Martigny backed out because of a government ruling limiting mass gatherings amid the coronavirus pandemic.

The revised event features only elite men's and women's categories, eliminating junior and under-23 races.