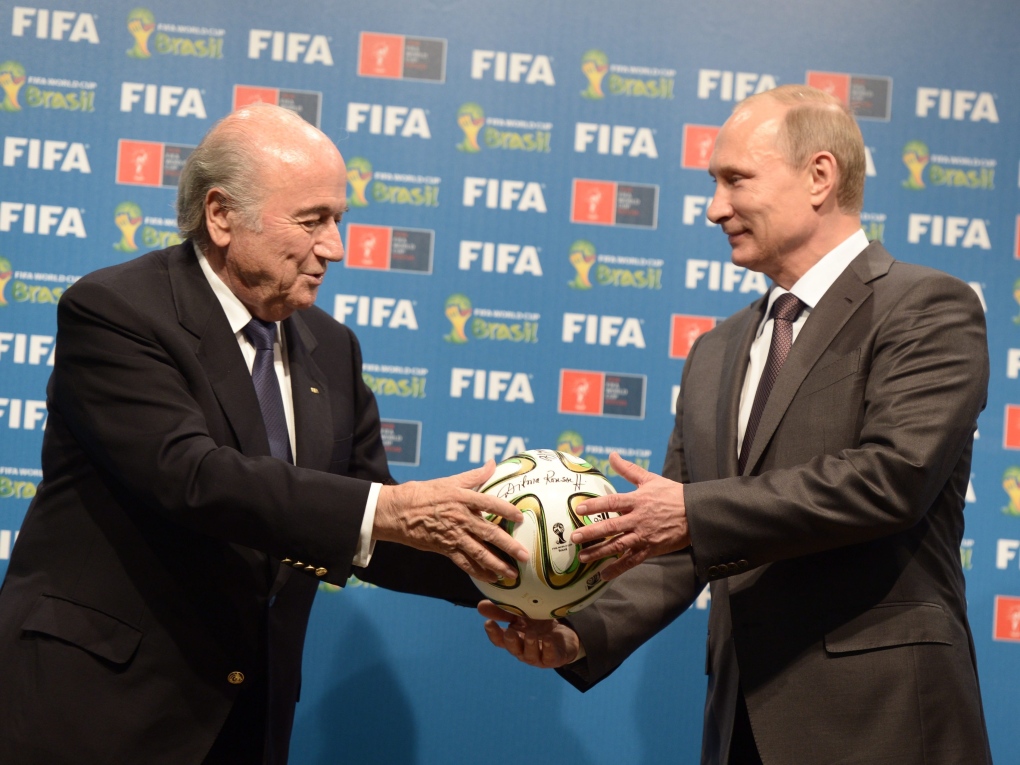 FIFA President Joseph Blatter and Russian President Vladimir Putin pose for a photo during an official ceremony of the symbolic handover of the FIFA World Cup from Brazil to Russia. (Photo ITAR-TASS / Alexei Nikolsky)

ZURICH, Switzerland -- FIFA has rejected calls to move the 2018 World Cup from Russia, saying the tournament "can achieve positive change."

Russia's alleged involvement in shooting down a Malaysia Airlines plane over Ukraine last week prompted calls from some lawmakers in Germany to review the country's hosting rights.

On Friday, FIFA issued a statement saying it "deplores any form of violence" and would support only peaceful, democratic debate about the World Cup.

"History has shown so far that boycotting sport events or a policy of isolation or confrontation are not the most effective ways to solve problems," FIFA said, adding that global attention on the World Cup "can be a powerful catalyst for constructive dialogue between people and governments."

The conflict between Ukraine and pro-Russia separatist rebels escalated days after the World Cup ended in Brazil.

On July 13 in Rio de Janeiro, Russian President Vladimir Putin attended a World Cup hosting handover ceremony with Brazilian counterpart Dilma Rousseff. Both then sat next to FIFA President Sepp Blatter to watch the final at the Maracana Stadium, won by Germany.

FIFA, which has Russian sports minister Vitaly Mutko on its executive committee, said a World Cup in the country "can be a force for good."

"FIFA believes this will be the case for the 2018 FIFA World Cup in Russia," the governing body said.

Blatter already rejected calls to strip Russia of the tournament after it annexed the Crimea this year.

"The World Cup has been given and voted to Russia and we are going forward with our work," Blatter said in March.

In a separate statement Friday, Mutko said a United States-led boycott of the 1980 Moscow Olympics had been a mistake.

"So there's no sense in reacting to politicians trying to make names for themselves," Mutko was quoted saying by Russian news agency R-Sport. "We're preparing in a calm way, building facilities, getting ready for the World Cup."

Russia has announced a $20 billion budget for building and renovating 12 stadiums, and other construction projects, for the first World Cup to be held in eastern Europe.

"FIFA has stated many times that sport should be outside politics," Mutko said. "Hosting an event like this, we're doing it for athletes from all over the world, for footballers, for the fans."