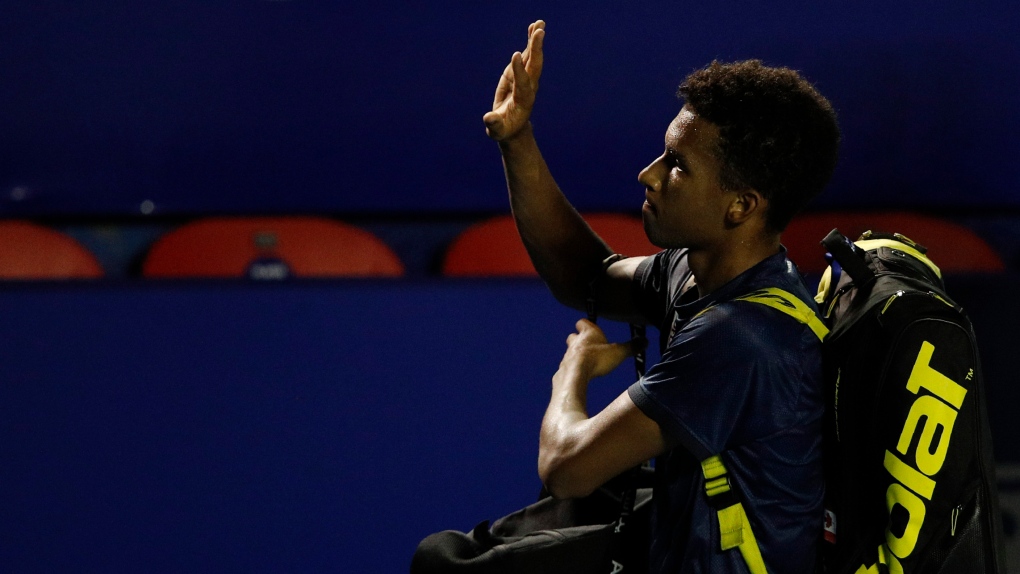 Canada's Felix Auger-Aliassime waves to fans as he walks off the court after losing in a quarterfinal to Greece's Stefanos Tsitsipas at the Mexican Open tennis tournament in Acapulco, Mexico, Thursday, March 18, 2021. (AP Photo/Rebecca Blackwell)

The 10th-seeded Auger-Aliassime, from Montreal, saved the only break point he faced on the clay court.

"I've had other good ones (this year), but against a player like Denis, to win in that way is positive," Auger-Aliassime said. "I was able to do a lot of good things out there and hopefully I can keep that form going."

Shapovalov didn't appear to be at full health as a trainer looked at his shoulder during the match.

Afterward, he said the shoulder is affecting him, especially on serve, but added it is not a serious injury.

Shapovalov was disappointed with his form against Auger-Aliassime.

"I just think he played his game. I didn't show up today," Shapovalov said. "He didn't have to do anything special really. It was more me missing today. Honestly, I think we both can agree that's what happened. It wasn't much of a match."

It was the third win in five career meetings against Shapovalov at the top level for the 20-year-old Auger-Aliassime. The Montrealer is now 2-0 on clay against the 22-year-old Shapovalov.

Auger-Aliassime was far more effective on serve. He won 78 per cent of points when he got his first serve in, 15 percentage points better than Shapovalov.

The two players are longtime friends after coming up through the junior ranks. Shapovalov stayed at Auger-Aliassime's family's house during his improbable run to the Rogers Cup semifinals in 2017.

Auger-Aliassime will face No. 2 seed Stefanos Tsitsipas of Greece in the quarterfinals on Friday. Tsitsipas beat No. 14 seed Alex de Minaur of Australia 7-5, 6-3 on Thursday.

Auger-Aliassime is 2-3 against Tsitsipas lifetime, having lost the past three matches.

Tsitsipas is on a roll, having won the ATP Masters event on clay last week in Monte Carlo.