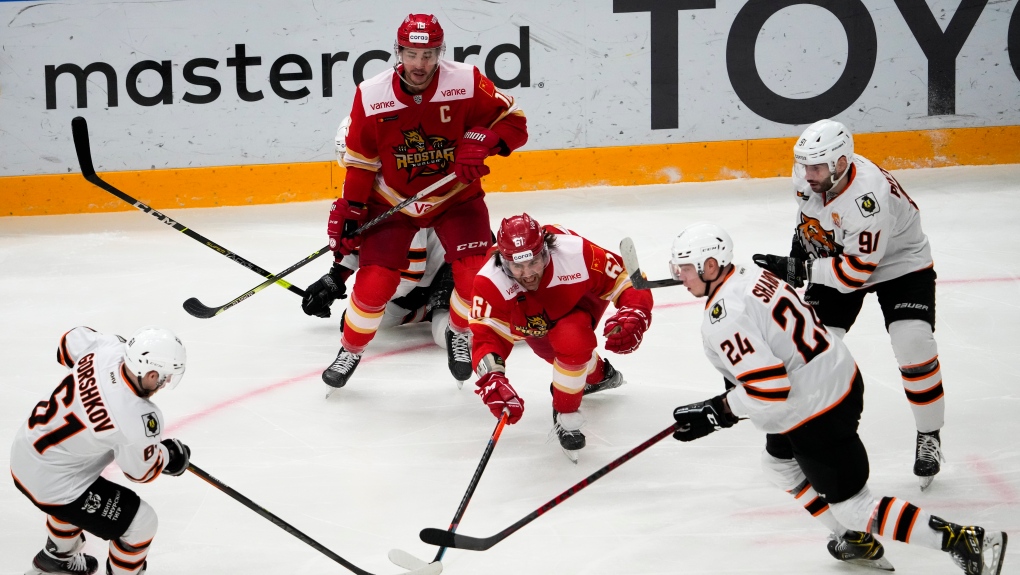 Kunlun Red Star's Ethan Werek, center, fights for the puck with Amur's Alexander Gorshkov, left, and Amur's Alexander Sharov, right, during the Kontinental Hockey League ice hockey match between Kunlun Red Star Beijing and Amur Khabarovsk in Mytishchi, just outside Moscow, Russia, on November 15, 2021. Canadians continue to play hockey for KHL teams in Russia and Belarus despite the Canadian government’s warning to get out of those countries. The 48 Canadian players currently on KHL club rosters this season is the most from any country outside Russia. (THE CANADIAN PRESS/AP, Alexander Zemlianichenko)

The 48 Canadian players currently on KHL club rosters this season is the most from any country outside Russia.

Forty-four are playing for clubs within Russian and Belarusian borders, with the other four in Kazakhstan.

Russia, with Belarus a supporter, invaded Ukraine on Feb. 24.

Canada has been firmly on the side of Ukraine in the conflict with $626 million in military aid and over $320 million in humanitarian assistance since February, as well imposing financial sanctions on Russia and Belarus.

“President (Vladimir) Putin’s war in Ukraine is a war on freedom, on democracy and on the rights of Ukrainians, and all people, to determine their own future,” wrote Adrien Blanchard, press secretary for Foreign Affairs Minister Melanie Joly, in an emailed statement to The Canadian Press.

“As Canadians, these are values we hold dear. Athletes who decide to play and associate with Russia and Belarus should explain their decisions to the public.”

Alberta-based player agent Ritchie Winter, who has three clients in the KHL, says players have a right to make a living in their profession as other Canadians do working in foreign countries.

“We live in a world where individuals are allowed to make those decisions. It’s just an individual decision related to an employment opportunity,” Winter said. “Has every player that’s gone, push, tugged and pulled and wrestled with the decision? Yeah, absolutely.

“At the end of the day, they’re husbands and fathers who have responsibilities to their families. If you’re a young family with limited resources because you played mostly in the minors, there’s a desire to take care of your family.

“Sometimes that leads people to the oilfields in Kazakhstan and sometimes it leads them to the KHL.”

Advisories to avoid travel to Russia and Belarus were issued March 5 and Feb. 24 respectively, Global Affairs Canada told The Canadian Press in a statement.

“Our government has been very clear. Canadians should avoid all travel to Russia and Belarus,” said Blanchard. “If they are in Russia or in Belarus, they should leave now. Our ability to provide consular services may become extremely limited.”

Dozens of Canadians play in men’s pro leagues across Europe every year. A top KHL player can make over US$1 million a year in salary.

The Canadian Press messaged nine Canadian players in the KHL asking what assurances they’d received from that league and their teams in regard to their personal safety. None responded.

“There were a number of players caught in the crosshairs last year when all of this happened. They stayed and didn’t see any risk,” Winter said.

“From what the players tell me, the environment isn’t changed from what it has (been) previously. Many of them have balanced that risk and determined that they would play there.”

He also knows of players who turned down opportunities to play in the KHL this season.

“Everybody has a different risk profile,” he said. “I’ve had Canadian and American clients turn down massive amounts of money compared to what they’ll make here.”

There were 53 Canadians in the KHL last season. Seven played for Latvia’s Riga Dynamo, which along with Finland’s Helsinki Jokerit withdrew from the league.

“Something I obviously don’t support is the war that’s going on,” said forward Jake Virtanen, who is on a tryout contract with the Oilers after playing 36 games for Spartak Moscow last season.

“It was one of the main reasons why I left. It’s a tough situation. Me, personally, I wouldn’t go back because of it.”

Ukraine supporter United States is entangled in a diplomatic row with Russia over a pro athlete.

WNBA all-star Brittney Griner, who plays pro basketball for Ekaterinburg in the off-season, was sentenced Aug. 4 to nine years in prison for drug possession.

When she arrived in Moscow on Feb. 17, police said they found vape cartridges containing cannabis oil in her luggage.

Winter says Russians playing in the NHL deters a possible retaliatory detention of a Canadian player over Canada’s support of Ukraine, but a McGill associate Professor of Political Science says the risk exists.

“Russia doesn’t have any rule of law, so anybody who is in Russia is always in danger of being framed, incarcerated, used as a pawn in whatever the local government, central government et cetera decides to do,” Maria Popova said.

The risk of a Canadian hockey player detained by local, state or central governments is low to moderate, “but there is a risk,” she said. “I think something like what happened to Brittney Griner is possible. The same playbook can be repeated in a case against a Canadian player for sure.”

“I don’t see why Russia would try to use these people as a pawn because Canada is not Russia’s main problem in this war,” Popova continued.

“There isn’t really any hope that Russia could change Canadian policy in Ukraine. They know Canada is firmly in NATO, clearly backing Ukraine.”

Goaltender Andrew Hammond was the most recent Canadian to sign with a KHL club. He joined Chelyabinsk Traktor on Sept. 16.

“With what’s going on in the world obviously, we’re paying attention to that for sure,” Jay Woodcroft said.

“My brother is in Belarus, so it’s not the big Russian mainland, but they play in that league. He’s carved a good career for himself there at a high level in the KHL.“

— With files from Steven Sandor in Edmonton.

This report by The Canadian Press was first published Sept. 28, 2022.