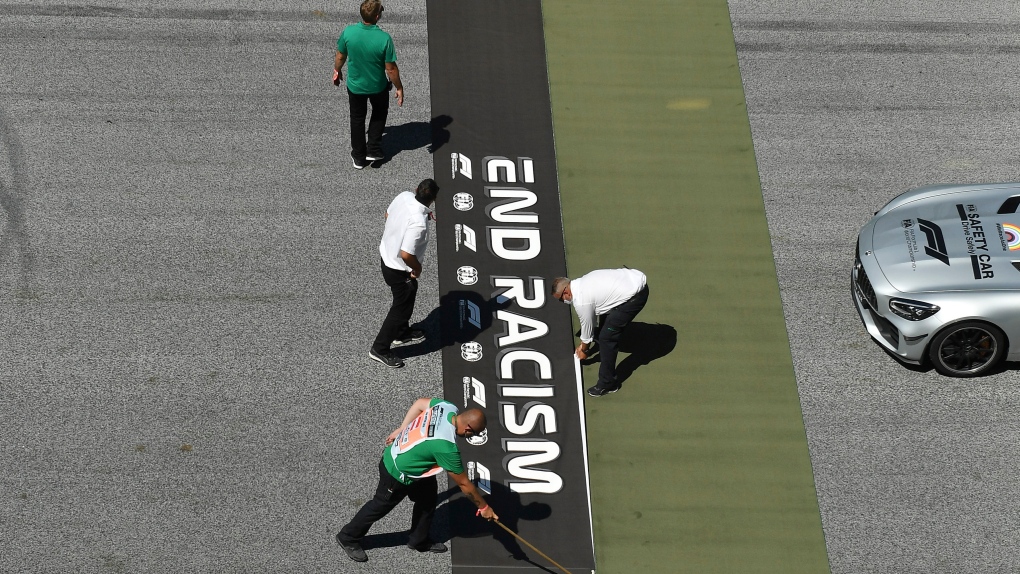 Workers prepare a sticker reading 'End Racism' on the track before the Austrian Formula One Grand Prix race at the Red Bull Ring racetrack in Spielberg, Austria, Sunday, July 5, 2020. (Joe Klamar/Pool via AP)

SPIELBERG, AUSTRIA -- Valtteri Bottas kneeled holding the winners' trophy at Formula One's season-opening Austrian Grand Prix on Sunday, where the podium trio held up a black T-shirt with "End Racism" written on it.

That message was said before the race, too, when all drivers wore that T-shirt. World champion Lewis Hamilton, the only black driver in F1, had Black Lives Matter on the front and End Racism on the back of his.

But six did not join Hamilton and 13 others in taking the knee: Kimi Raikkonen, Max Verstappen, Daniil Kvyat, Antonio Giovinazzi, Carlos Sainz Jr. and Charles Leclerc -- who finished in second place.

Hamilton, who knelt alongside Sebastian Vettel, at one point bowed his head pensively while Kvyat pointed to the anti-racism message on his T-shirt.

Hamilton has spoken widely about racism in recent weeks following the death in Minneapolis of George Floyd -- a handcuffed and unarmed Black man -- after a police officer pressed his knee on Floyd's neck for nearly eight minutes in May. Hamilton attended a Black Lives Matter march in London and is setting up a commission to increase diversity in motorsport.

Soccer players on fields in England and Germany have taken the knee together simultaneously before games in support of the Black Lives Matter movement, and F1 drivers discussed what they should do during a drivers' briefing on Friday evening.

Leclerc and Verstappen wrote on Twitter before the race why they chose not to kneel.

"I believe that what matters are facts and behaviours in our daily life rather than formal gestures that could be seen as controversial in some countries," Leclerc said. "I will not take the knee but this does not mean at all that I am less committed than others in the fight against racism."

"I am very committed to equality and the fight against racism. But I believe everyone has the right to express themselves at a time and in a way that suits them," the Dutch driver said. "I will not take the knee today but respect and support the personal choices every driver makes."

Hamilton called out other F1 teams on Thursday for not doing enough to combat racism and said the sport still needs to push for more diversity. Mercedes is competing in an all-black car instead of the usual silver, while Hamilton and Bottas have "End Racism" written on the car's halo.

Hamilton praised some drivers for speaking out against racism, but he still feels others need to do more and he raised that in their briefing.

"Silence is generally complicit. There still is some silence in some cases," he said on Saturday. "There are people who still don't fully understand exactly what is happening and what (is) the reason for these protests."

Motorsport's governing body FIA is donating one million euros (US$1.12 million) to improve diversity in motorsport.