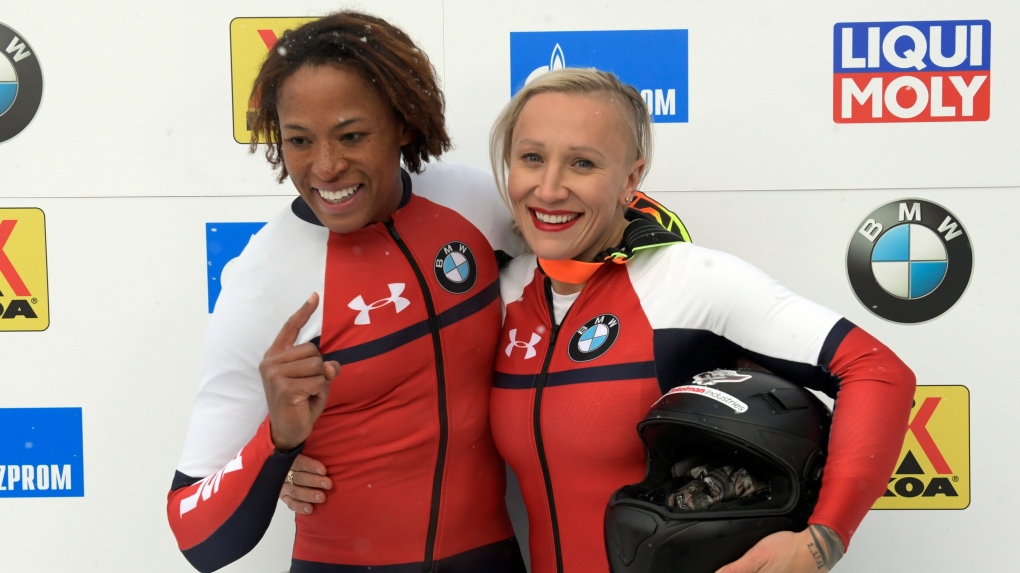 Kaillie Humphries' World Cup bobsled debut for the United States was a winning one.

The former Canadian bobsled star won this season's women's opener on Saturday, posting the fastest time in both heats at Mount Van Hoevenberg in Lake Placid, New York for her 23rd career World Cup victory -- and her first for the U.S.

Humphries teamed with Lauren Gibbs to finish two runs in 1 minute, 53.48 seconds, posting the fastest time in both heats.

"I've been through a lot emotionally over the last year, so knowing I have the skill to focus and turn it on when I need to builds confidence," said Humphries, who won two Olympic golds in her career for Canada. "I can rely on my teammates and they trust me back. Some things aren't perfect, but I'm a high-performing athlete and there will always be things I want to improve on."

That might be bad news for the rest of the women's bobsled circuit. Humphries showed no rust whatsoever in her first World Cup race in nearly two years.

The event Saturday was Humphries' first major international race since she won the bronze for Canada at the 2018 Pyeongchang Olympics. She sat out last season after filing a complaint with Canadian officials and saying she no longer felt safe in that nation's program.

She gained her release to join the U.S. team in September and competed in a pair of North American Cup races last month.

Germany's Stephanie Schneider drove to the silver, and Germany also got the bronze in the sled piloted by Kim Kalicki. Schneider was nearly one-third of a second behind Humphries, Kalicki nearly a half-second back. In bobsled, those are significant margins.

"This feels fantastic to start the season so strong," Humphries said. "It's a great way to start this next chapter. The team has been so supportive and there's been an incredible team effort this week to make this win happy today. I'm feeling really happy and proud."

Humphries learned to drive on the Lake Placid track, and has had enormous success there. She's now won nine major international medals on that track -- five golds, including the 2012 world championship, along with a silver and three bronzes.

She gets a chance to add to her total next weekend, when the second World Cup race of the season is also held there. Lake Placid is hosting two World Cups this season because the planned opener in Park City, Utah, had to be moved because of mechanical problems at the 2002 Olympic track.

Also for the U.S., the sled driven by Brittany Reinbolt and pushed by Sylvia Hoffman was seventh -- exactly one second behind Humphries. Hoffman is scheduled to push for Humphries next weekend.

In the first two-man race of the season later Saturday, Germany's Johannes Lochner and Christopher Weber pulled off a mild upset by beating countrymen Francesco Friedrich and Thorsten Margis. Friedrich had won 11 consecutive major international two-man races -- including every World Cup race last year, plus an Olympics and a world championship -- before Saturday.

Canada's Justin Kripps and Alexander Kopacz took third. For the U.S., the team of Hunter Church and Kris Horn was fifth, one spot ahead of Codie Bascue and Josh Williamson.