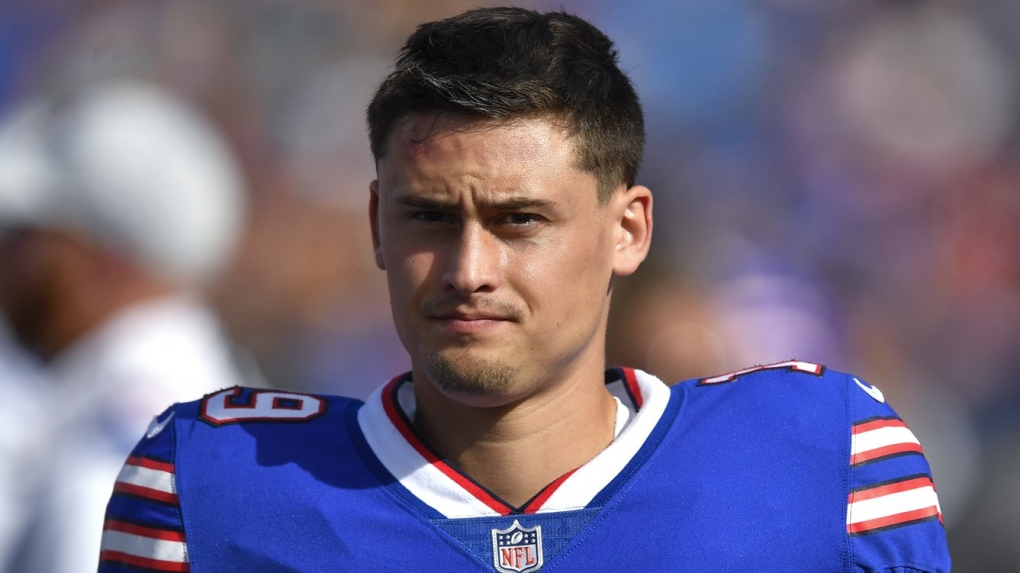 Former Buffalo Bills punter Matt Araiza walks on the sideline during the first half of a preseason NFL game against the Indianapolis Colts in Orchard Park, N.Y., on Aug. 13, 2022. (AP Photo/Adrian Kraus)
SAN DIEGO -

Former Buffalo Bills punter Matt Araiza will not be charged in connection with an alleged gang rape of a 17-year-old girl at an off-campus party last year when he played football for San Diego State University, prosecutors said Wednesday.

The San Diego County District Attorney’s Office said no charges will be filed against any of Araiza's former Aztec teammates who were also accused in the reported assault in October 2021.

“I am grateful that the district attorney and the San Diego Police Department have discovered all the facts and found no criminal wrongdoing. I am excited to continue my NFL career," Araiza said in a statement issued by his agent, Joe Linta.

The decision followed an investigation involving more than 35 witness interviews and evidence derived from 10 search warrants that included cellphone data and video from the night in question, the DA's office said in a statement.

“Ultimately, prosecutors determined it is clear the evidence does not support the filing of criminal charges and there is no path to a potential criminal conviction. Prosecutors can only file charges when they ethically believe they can be proven beyond a reasonable doubt,” the statement said.

Araiza’s lawyer, Kerry Armstrong, said he and his client were “elated" by what he called the right decision.

“It is my hope that Matt can join an NFL team again and do the thing that he does best—punt footballs eighty yards down the field,” Armstrong said.

The accuser’s attorney Dan Gilleon tweeted, “I am never surprised when a prosecutor does not file sexual assault charges when the victim was intoxicated.”

“It’s a very rare case where the criminal justice system achieves anything satisfactory for the victim of a sexual assault,” Gilleon continued. “Prosecutors cannot file charges unless they can get a unanimous decision (from jurors) who cannot vote to convict unless they’re convinced beyond any reasonable doubt.”

However, Gilleon said he expected a better verdict in his client’s civil lawsuit, where “the focus is on the harm defendants caused her.”

“The defendants will have no sympathizers once the evidence comes out,” he wrote.

The Bills released the rookie punter in August just days after backing Araiza based on the findings of what the team called its “thorough examination” of the allegations included in the lawsuit.

The accuser, now 18, alleged in the suit that Araiza, then 21, had sex with her in a side yard at an off-campus residence before bringing her into a bedroom where a group of men took turns raping her. She said she went in and out of consciousness as the men assaulted her for about 90 minutes.

She told her friends that night that she'd been raped and reported the assault to police the following day, according to the court filing.

The lawsuit named Araiza along with two former Aztec teammates who are no longer with the team.

The university has been heavily criticized for delaying an administrative inquiry into the allegations. San Diego State officials have said they deferred investigating at the request of police for fear that conducting their own might harm the criminal investigation.