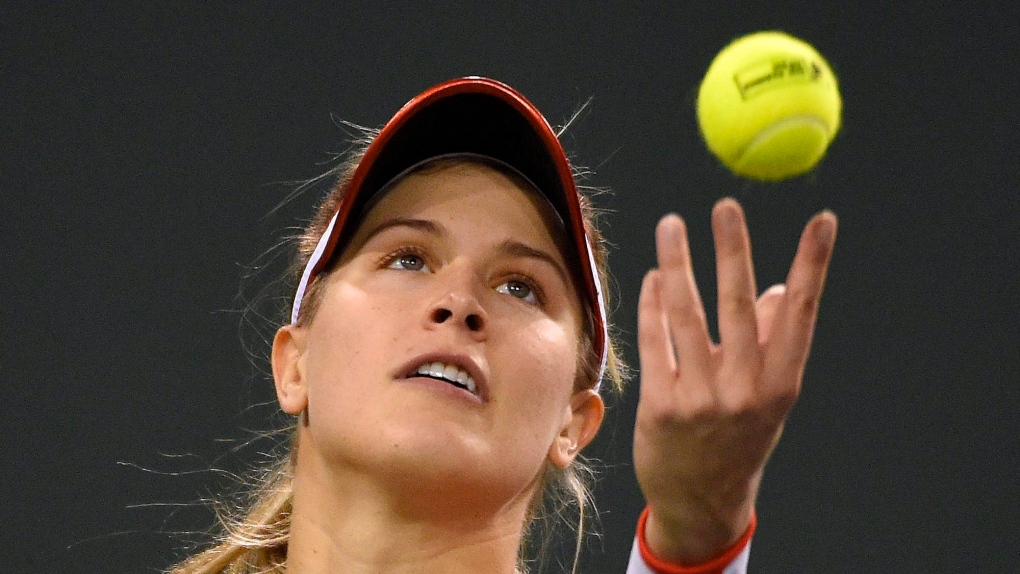 Her first match left her exhausted physically and mentally, but Eugenie Bouchard couldn't be happier.

After a 17-month layoff recovering from right shoulder surgery the native of Westmount, Que., is back playing tennis at the Odlum Brown VanOpen.

“The goal of surgery and coming back is to be able to play exactly how I want to and how I was playing before,” the 28-year-old former world No. 5 said Monday.

“This is what we do as athletes. The point is not to practice all the time, the point is to play.”

“I was exhausted,” Bouchard said with a smile. “I started feeing tight in my body, my muscles were getting sore.

“It's just that mental focus. To play in a match is different than practice. It's about getting those reps in over and over again. I'll get the endurance from that and be able to get back to playing matches totally normal, but it's one baby step.”

Bouchard plays her first single match Tuesday against Arianne Hartoro of the Netherlands, a player she knows nothing about. Bouchard knows there may be bumps along the road and accepts being an underdog.

“Expectations are really low, expectations are on the floor,” said the two-time Canadian Press female Athlete of the Year. “My actions and my personal standards are high but in terms of results, we don't know what to expect.

The Odlum Brown VanOpen ends Sunday. The tournament, which returns after missing two years due to COVID-19, has attracted 135 players to the Hollyburn Country Club battling for a combined purse of over US$274,360.

The men's tournament, which has a top prize of $21,600, has been an ATP Challenger Tour event for several years. For the first time this year the women's competition is a WTA 125 tournament with a $15,000 top prize.

Bouchard, who received a wild-card entry into the tournament, last played March 2021 at the Monterrey Open where she hurt her shoulder in a first-round match against Zhu Lin.

Bouchard became the first Canadian to advance to the singles final at Grand Slam in 2014 when she lost in the final at Wimbledon to Petra Kvitova. She also reached the semifinals of the Australian Open and French Open that year.

Since then, Bouchard has battled multiple injuries, including suffering a concussion after a fall in the dressing room at the U.S. Open.

Dealing with the injuries and time away from the game has been a learning experience.

“I've learned a lot in life and been through some really hard moments,” she said. “It's really tested my patience having to be out for so long. It's not like when you retire and you're at peace with stopping. This is like a forced step. It's hard to accept mentally.

“It made me realize how much I love tennis. There are so many other great things in life beside tennis, but it's what I want to do now and for the next few years.”

Marino burst onto the WTA Tour and reached a career-high No. 38 in 2011 before quitting the sport in 2013 due to depression. She returned to tennis in 2017 then missed another 18 months with an injury.

“To come back, not having competed in a match, it's really hard to replicate that match feel from practice to competition,” she said. “There's a lot of nerves in your first event, there's a lot of challenges.”

Bouchard played at the Odlum Brown event as a junior in 2012, the same summer she won the Wimbledon junior girls' title.

Bouchard knows she's at the start of a new journey, but isn't sure where it will end.

“The goal of the surgery and coming back is to be able to play exactly how I want to and how I was playing before,” she said. “It (the first match) went well, and everything is great. Now the goal is to just accumulate matches and hopefully everything stays fine with my shoulder.

“The journey is as long as it needs to be. I love playing tennis. I'm just here to do what I can.”

BASELINES: Two seeds in the women's singles draw were uprooted Monday. Heather Watson of Britain eliminated eighth-seeded Elisabetta Cocciaretto of Italy 3-6, 7-5, 6-2, while Victoria Jimenez Kasintseva of Andorra bounced seventh-seeded Misaki Doi of Japan 6-3, 6-2. â€¦ Rebecca Marino of Vancouver will play American Emma Navarro on Tuesday in her first singles match at Hollyburn Country Club. â€¦ Gabriel Diallo of Montreal is the first Canadian men's player to advance to the second round of singles after he knocked off world No. 154-ranked Belgian Zizou Bergs 4-6, 6-2, 7-6 (5). Diallo is ranked at 553rd in the world. Vasek Pospisil of Vancouver will play his first singles match on Tuesday against Felipe Meligeni Alves of Brazil.

This report by The Canadian Press was first published Aug. 15, 2022.